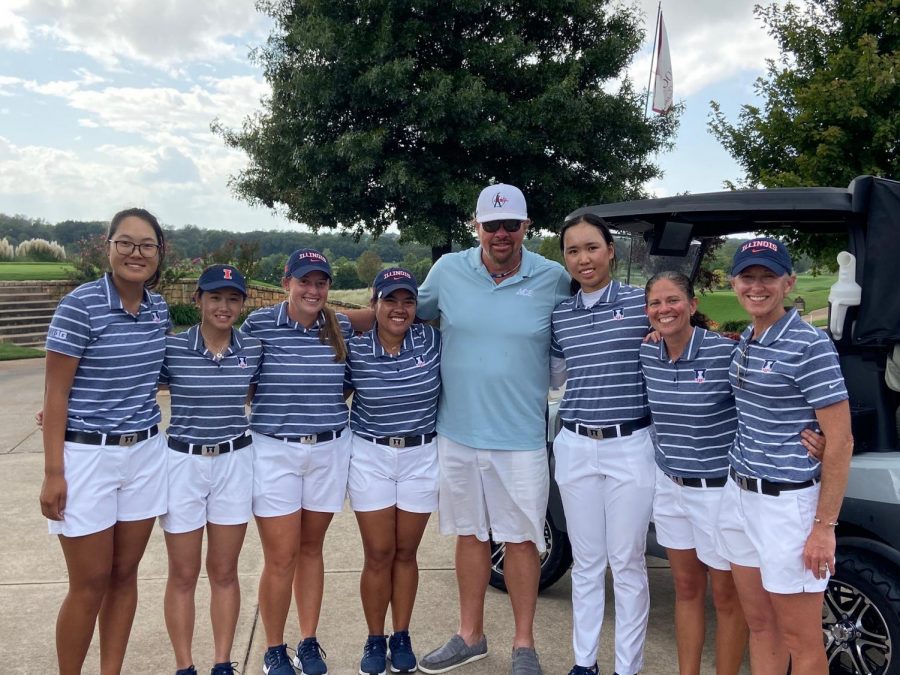 The Illini golf team meets Toby Keith at the Schooner Fall Classic over the weekend. The Illini tied for fifth place in the tournament.

The Illinois women’s golf team competed in the Schooner Fall Classic this week on a tough course in Norman, Oklahoma. The event was hosted by the Oklahoma Sooners, and the Illini placed tied for fifth out of 15 teams.

Following the women’s last performance, they dropped to No. 19 in national rankings after starting the year at No. 15. They started the day well last week in Toledo, Ohio but dropped three spots after the first round. Senior Tristyn Nowlin said the team made adjustments between the two competitions.

“We hadn’t been back in the tournament mindset for a while, since May I think, and so we noticed that our energy had been down,” Nowlin said. “We came back and did some pretty intense workouts and worked on our bonding.”

Unlike the week before, the Illini didn’t get off to a rough start on the windy and difficult course in Oklahoma. Despite a great performance from Nowlin, who shot a 69, Illinois was tied for sixth place with Louisville after the first round. Freshman Siyan Chen shot the second-best score for the Illini in the round, shooting a 73. Host Oklahoma was in first after the round, followed very closely by Texas and Alabama.

Despite not having a good start to the invite, the Illini had a great showing in the second round. Illinois moved up two spots to fourth place, with good scores from each of the starting five golfers. Chen and sophomore Crystal Wang both shot an excellent 68 in the round, and the three other Illini shot a 71. Oklahoma still led Texas after the second round, the two teams separated by just one stroke and the Illini trailed Alabama by only two strokes for third.

The third and final round of the tournament wasn’t a bad one for Illinois, but due to a spark in performance by Baylor, Louisville and Mississippi State, Illinois fell to tied for fifth place, ending the tournament. Chen finished as the second-best Illini for the round again, but Nowlin led the pack.

Nowlin shot scores of 69, 71 and 67 in the tournament to finish with a final score of 207. Not only was this the best on the team, but tied for best in the whole tournament. Nowlin tied for first place individually with Frida Kinhult, a freshman for Florida State, who is currently ranked as the fifth-best women’s amateur golfer in the world. Illini head coach Renee Slone was very impressed with her senior’s performance in Norman.

“I felt like she really managed herself and her game really well. There was a sense of calm about her,” Slone said. “She really did a great job of bouncing back really well and posted a great (third) round that day.”

Nowlin herself was also proud of her performance.

“I am extremely happy (with my performance). I was able to stay in the moment and stay where my feet are,” Nowlin said. “I just stayed very present and committed and persevered through the conditions.”

The second-highest finisher for the Illini was Chen, who shot a 212, placing her tied for 18th individually out of 81 competitors. Despite having a lead through both the first and second rounds, Oklahoma had a nightmare third round and fell all the way down to seventh place. Texas played consistently the whole match and finished in first with a final score of 838, followed by Alabama, Mississippi State and Baylor. Illinois and Louisville followed them, tying for fifth place.

The women have this week off and will then travel up north to Medinah, Illinois to host the Illini Women’s Invitational on October 7-8.