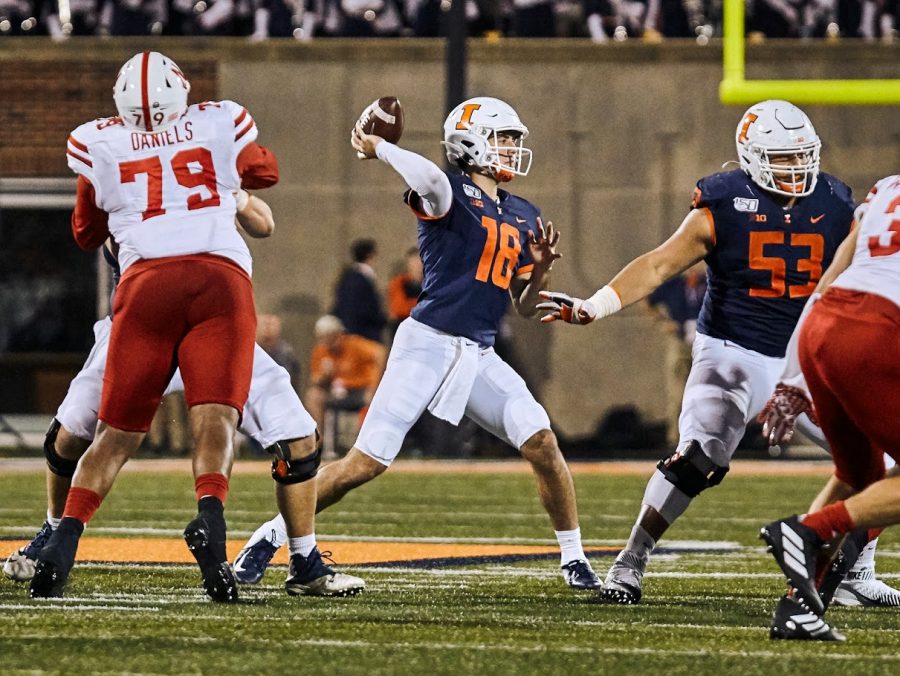 Although the goal this offseason for the Illini was to improve from 2018 and compete for a bowl bid, the roster lacks players with actual experience being part of a winning team. One of the transfers who does have experience is junior quarterback Brandon Peters, and through four games as an Illini thus far, results have been mixed.

“(Brandon’s) done some good things, and some things he needs to do better,” said head coach Lovie Smith. “I love him being our quarterback. He’s made a lot of plays for us. Four games into it, I know he can’t wait to finish up the football season, (and) I can’t wait to finish it up with him.”

Peters came in with a reputation as an immobile pocket passer, but he’s quickly shown to be more than that.

The Avon, Indiana, native quickly dissolved that narrative with 36 yards rushing and a touchdown on the ground to complement another three touchdown passes through the air in a season-opening 42-3 Illinois victory over Akron.

He followed that up with another four touchdown passes the following week at Connecticut, as Illinois again came out victorious, 31-23.

Peters began running into problems the next week at home against Eastern Michigan. Though he finished with a respectable stat line, the Illini went two consecutive quarters without scoring and ultimately dropped the contest to a group of five opponents.

Week 4 against Nebraska was certainly a low point for the signal-caller thus far, as he passed for just 78 yards and completed only 40% of his throws, as the run game kept the Illini afloat before an eventual 42-38 loss.

After four weeks, Peter’s profile as a player is becoming clearer. He possesses a good, but not great, arm and has his struggles with accuracy from time to time. On the positive side, he’s more mobile than he’s given credit for and can keep a play alive to pick up first downs and even touchdowns, when the opening presents itself.

“I think (Brandon’s) doing pretty good. There’s things that we need to get cleaned up absolutely; there’s some things where he’s been really good, and some things he’d like to have back,” said offensive coordinator Rod Smith. “He’s seven games in, eight games into his career, so there’s some gelling that needs to take place. Where in the middle of that, but at the same time, he’s shown some signs where I think he can be a really good quarterback when it’s all set-and-done, but he’s on pace.”

Coming off a performance to forget against Nebraska, Peters mentioned he used the bye week to rest and refocus as conference play begins to heat up.

With two weeks to prepare for his first conference road start with Illinois, Peters is looking forward to the matchup at Minnesota.

“Watched the Purdue game, I think they’re a really talented team up front and at the linebacker position,” Peters said. “They’re younger at DB, but I still think they’re really athletic guys that can make big plays.”

As a sophomore at Michigan, Peters completed 13 passes for 56 yards and a touchdown against Minnesota in his first career start, a 33-10 victory.

Being one of the few players on the roster with experience in some semblance of on-field success, Peters certainly has some lessons he could pass down to his new teammates, but the junior feels becoming successful is a simple process his teammates are more than capable of making.

“I don’t know if I have any tips or tricks, but you just gotta stay focused,” Peters said. “That’s really the big part to the game. You can’t make mistakes, so you really gotta focus in.”