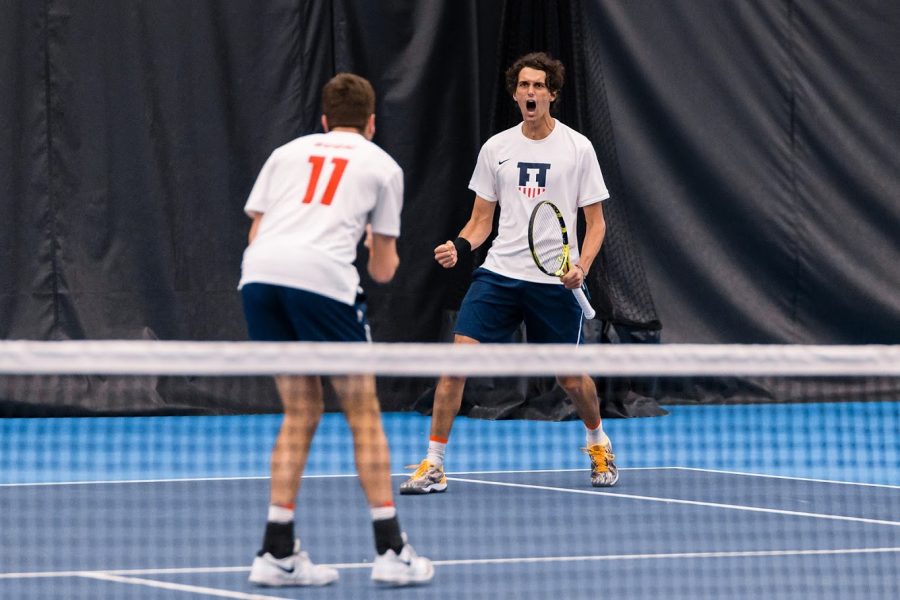 Five players were in action across the country this weekend for the Illini, accumulating 16 wins over four days of competition at the Oracle ITA Masters in Malibu, California, and the Southern Intercollegiate Championships in Athens, Georgia.

Junior Alex Brown made his season debut and was the lone Illini in California this weekend, representing both Illinois and the Big Ten at the competition. Brown, the 12th overall seed among the 32 players in the tournament, defeated Belmont’s Hendrik Inno, the 21st seed, in straight sets, 6-3 and 6-0, in the opening round. Coming in as the underdog in the second round against five-seed Matias Soto of Baylor, Brown remained unphased, winning 6-4, 6-4 in two sets. A third-round victory over Corrado Summaria of Pepperdine saw Brown face the top-seeded University of Southern California, Los Angeles Bruin Keegan Smith in the semifinals. Sadly, Brown’s incredible run ended here, falling in three sets, 6-4, 3-6, 6-1.

Brown teamed up with Illinois women’s tennis junior Asuka Kawai in the mixed doubles. Entering the field as the 12-seed, the duo faced Valparaiso’s Brandon Ancona and Denver’s Anna Riedmiller in the first round and lost, 6-4.

Montsi finished the week with a 3-1 record and a consolation championship in a Black Singles Draw. After falling to Georgia’s Blake Croyder in the opening round of competition, Montsi rattled off three straight victories over Florida’s Johannes Ingildsen (6-7 (2), 6-4, 6-2), Louisiana State’s Boris Kozlov (6-4, 7-5) and Central Florida’s Bogdan Pavel (7-6 (2), 6-7 (5), 10-3) to win the black division consolation bracket.

Horve also ended the meet with a 3-1 record in the Silver Division. An opening-round victory over Georgia’s Alex Phillips (7-5, 6-2) was followed suit with a second-round defeat to Harvard’s Henry von der Schulenberg (7-5, 7-6(4)). A walkover victory and a 6-4, 6-1, win over Clemson’s Yizhou Liu rounded a successful weekend for Horve.

Gomes finished 2-2 in his season debut. Gomes fell to Georgia’s Alex Diaz and University of Miami’s Franco Aubone before getting two walkover victories.

Horve and Bancila finished 1-2 in Black Doubles Draw, with the duo’s lone win coming against Clemson’s Teodor Giusca and Vialmin with 6-3. The losses were to Clemson’s Yizhou Liu and Gabriel Diaz Freire and Georgia Tech’s Marcus McDaniel and Zummy Bauer.