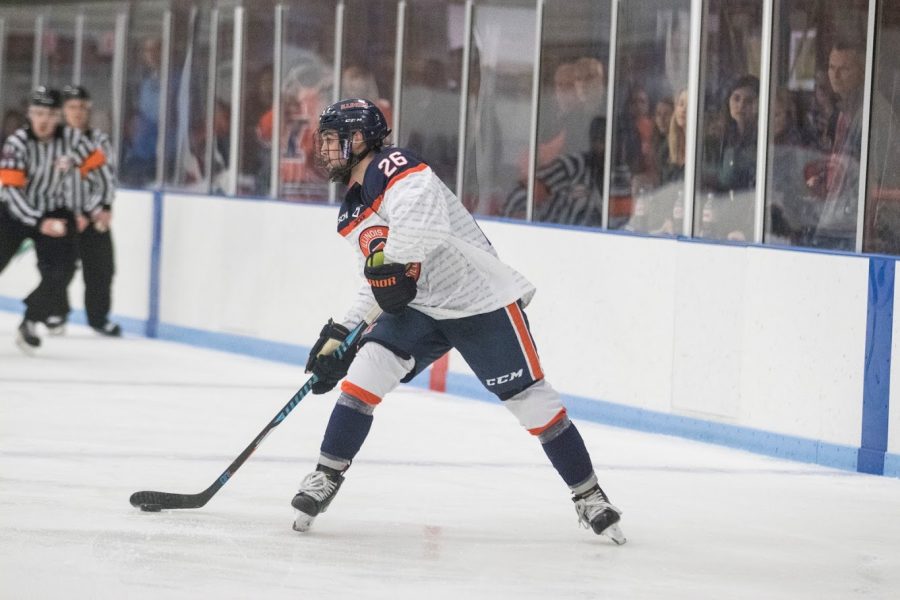 Thomas Kolaz gets ready to take a shot at Robert Morris’ goal at the Ice Arena on Nov. 2. Majoring in community health, Kolaz aspires to run a hospital in the future.

The buzz surrounding Illinois hockey is electric this season. Coming off of a winning season that was ended by champion Minot State, Illinois is confident it can get even better. With eight out of ten of their returning scorers back for another season, the Illini are expecting to compete at championships. Already 2-0 on the young season following the weekend sweep of Illinois State, Illinois can thank one of its key returning scorers, Thomas Kolaz.

This past Saturday, junior forward Kolaz led the Illini to victory over the Redbirds 3-2 behind two goals, one coming early in the second quarter and the other coming in overtime with seven seconds left that gave them the walk of victory.

Kolaz, a native of Springfield, Illinois, has been playing hockey since his friend’s dad introduced the sport to him when he was 3-years-old. Thomas quickly excelled in the rink, playing for numerous travel teams and building his brand. When it came time for college, Kolaz had no shortage of options. Although Kolaz could have played at several Division III schools, he couldn’t pass up the opportunity of an Illinois education and its campus, despite it just being a club sport.

“The academics played a big role in this,” Kolaz said. “I had a few other options, but this was definitely the best fit for me after a couple of visits.”

Although Kolaz is a standout hockey player, he believes his final game will probably be while wearing the orange and blue. A hockey career just isn’t what Thomas plans or wants to do after graduation.

“That is not what I want to do,” Thomas said. “I kind of want to take my major and roll with that.”

As an Illinois student, Kolaz has had a good time balancing academics and hockey, and in his free time, he lives with three hockey teammates whom he watches movies and plays video games with. Majoring in community health with a concentration in health administration and planning, Kolaz hasn’t had to compromise the number of credit hours he takes per semester despite the tight schedule. He is currently on track to graduate this spring.

In the future, Kolaz has a clear idea of what he wants for a career, hoping to climb the ladder and get into the business side of the medical field.

“I want to run a hospital and become a CEO of a hospital,” Kolaz said.

Over the course of his college career, while it is obvious Thomas is a standout athlete for one of the best club hockey programs in the nation, he has successfully balanced all facets of the college experience and is wildly ready for the real world after graduation. But with two years of eligibility remaining, Thomas still has time to play, focus on hockey and help lead the Illini to wild success, potentially even another national championship.