Players come together for international exhibitions 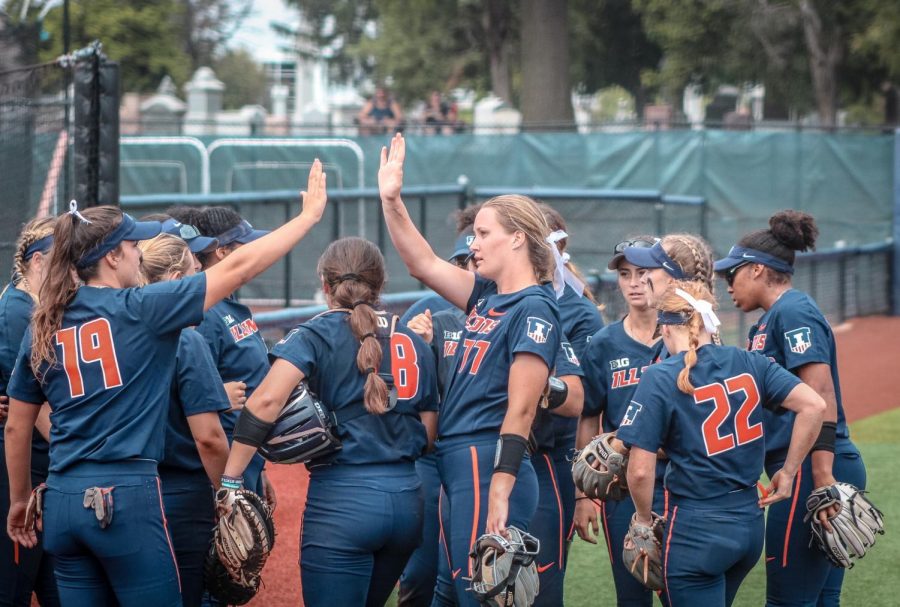 Over the summer, the Illini tested their skills abroad, playing against teams in the United Kingdom and The Netherlands. The Illini were able to learn about other cultures from players across the world.

Illinois softball was back in action at Eichelberger Field this weekend, but before the team could start fall ball — and the fall semester — they had to make it back across the Atlantic.

This summer marked the program’s inaugural international tour, which took the Illini across the pond to the United Kingdom, the Netherlands, Belgium and France for a little over a week. While abroad, the Illini took part in two exhibitions against the British Club Team and the Amsterdam Pirates Club Team. Per NCAA rules, Illinois softball will be eligible for another international trip in four years.

A major factor in the planning and organizing of the trip was the support of Athletic Director Josh Whitman and his DIA staff, taking a great deal of stress off of the softball coaching staff and the team.

“It takes months to get everything squared away,” said head coach Tyra Perry. “We used a company that was great, and we were really excited about our guides. They were very helpful in many different ways. It took a lot of planning, and our (administration) was great; it helped us every step of the way. They were sending other teams and had sent other teams, so they were definitely a major part of the planning process.”

For a majority of the team, the European Tour was their first time outside the United States. Prior to this summer, only a few former Illini had ever traveled to play softball internationally. This meant current members were experiencing international flights, customs agents and language barriers for the first time — and even though the game of softball is universal, they quickly learned the language by which players communicate while playing is not.

Members of the Illinois softball team experienced the reality of a language barrier in sports while in Amsterdam, Netherlands; part of their itinerary while in the city included a youth clinic, where the Illini and the Amsterdam Pirates got to interact before their Monday matchup.

Sophomore infielder Kailee Powell recalled the moment as an exchange of both sportsmanship and culture.

“They were teaching us Dutch words and, like, hitting — we couldn’t figure out how to say we’re going to hit now (in Dutch),” Powell said. “It was cool to just learn each other’s culture.”

Playing together at the end of the summer also allowed the Illini to come together collectively and get to know the newest members of the team. Preparation for the tour included a 10-day practice leading up to Illinois’ departure for London on Aug. 6.

“We got those 10 extra practices that no team definitely in the Big Ten got because we were the only ones that went abroad,” Loya said. “Those 10 practices, it kind of let the freshmen and incoming girls know how we run practice and how things are kind of ran around here, so once it was time that fall ball started, I think everyone kind of had a foot in the water.”

Back stateside for the fall, the Illini have returned to the familiar confines of Eichelberger Field for two tournaments and an alumni game.

But there’s no intention from the Illini to make this summer’s international adventure their last.

“We are hoping that the funding and everything and (the) program that Josh (Whitman) has implemented to keep people going every four years … stays viable,” Perry said. “To have that experience as a team altogether, and as coaches, to have that experience with our players, it was awesome.”