Spartans fall from grace against Illini 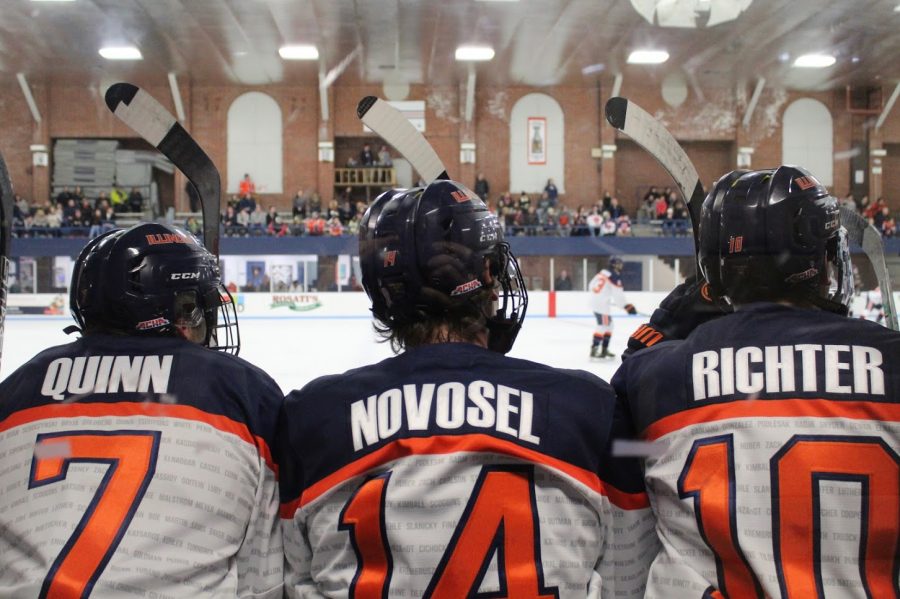 Despite outscoring the Spartans 11-2 in regulation, Illinois (3-1) split its two-game series with Michigan State (3-1), winning the first game 10-1 before losing the second game in a shootout 2-1.

The first game on Friday started off on a high note for the Illini. After back-to-back thrilling one-point victories over in-state foe Illinois State, Illinois controlled the Spartans from the beginning. Illinois successfully neutralized the Spartans’ powerplay chance and scored two shorthanded goals by senior Evan Sabo and freshman Braden Stewart, respectively, in less than a minute.

The Illini were far from done, however, as they scored another four goals before the period ended; Jon Moskaluk, Braden Stewart, Drew Ritcher and Thomas Kolaz all added to Michigan State’s misery and the Illini intermission with a comfortable 6-0 lead.

“We were ready and excited to play,” Illinois head coach Nick Fabbrini said. “Our guys made great reads and great plays, and we like to be aggressive.”

Michigan State started out the second period better offensively, with Nicholas Zervos scoring on a power play to trim down Illinois’ lead to 6-1. But, Illinois would score four more times before the second intermission. After giving up his eighth goal, Michigan State head coach James Martin took out goalie Maxwell Quertermus, replacing him with Lucas Chapel.

Although Chapel shut out the Illini in the third period, Illinois established a monumental lead and rode its hot start to a dominating 10-1 victory, with goalie Royce Allerd converting 26 out of 27 save opportunities.

But Michigan State opened Saturday’s faceoff differently than they tipped off Friday’s.

Martin decided to give Patrick Hoedeman the start at goalie. After the first 20 minutes of play, the game was deadlocked at 0-0, a far cry from the six-goal opening the Illini experienced on Friday. The Spartans outshot the Illini 13-7 after the first period.

After failing to capitalize on a powerplay early in the second period, Michigan State was able to recover and score on a breakaway goal from Nicholas Zervos, his second goal of the weekend, making it 1-0. For the first time this weekend, the Spartans had the lead.

Midway through the second period, senior Jake Barnhart was put in at goalie, despite Illinois’ performance on the ice.

“The plan was to give both guys action, as both are playing next weekend in Oklahoma,” Fabbrini said.

After Michigan State held the Illini in check for a bit longer, Illinois defender Joe Nolan was able to convert on an open shot to tie it up at 1-1.

After scoring, both teams turned it up a notch defensively, with each goalie making incredible plays to keep the game deadlocked at one in the third period and forcing overtime.

After five scoreless minutes of overtime, the Illini and Spartans headed for a shootout, the first of the year for the former.

After 15 consecutive saves by the goalies to start the shootout, Michigan State finally got the puck past Barnhart via a goal by Tyler Lee. Having to score to keep the game alive, Illini senior Mark Candotti’s shot was caught by Hoedeman, giving the Spartans the victory.

“I told them we needed to be a lot better,” Fabbrini said. “This was not a good loss, and it’s hard to find positives. We will watch some film and focus on getting better over the next month.”