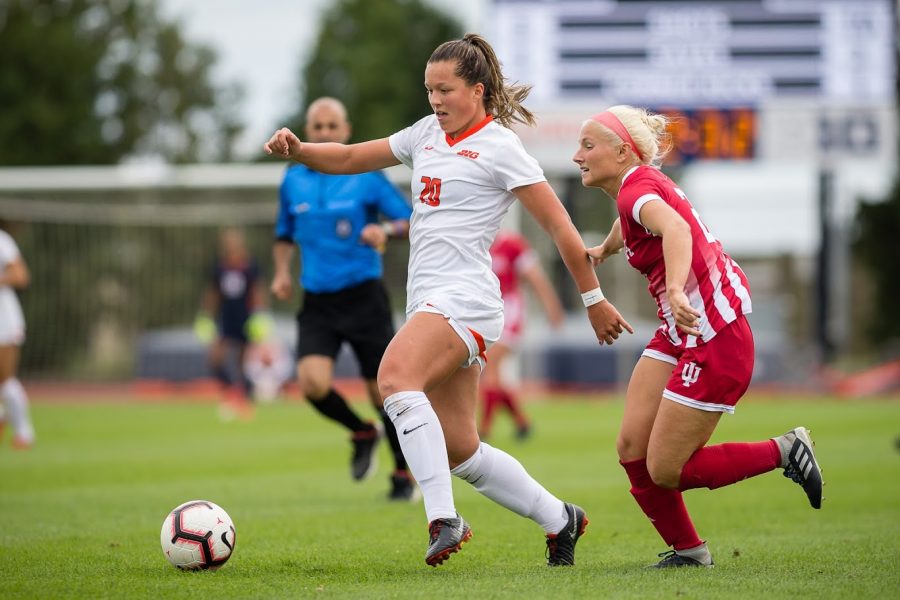 Illinois forward Makena Silber (20) dribbles the ball during the game against Indiana at the Illinois Soccer Stadium on Sunday, Oct. 14, 2018. The Illini won 1-0 in double overtime.

The Illini have lost their last four games after starting the season 7-1 and garnering a No. 10 ranking in the NCAA RPI. Illinois has struggled in Big Ten so far, and Sunday’s game was Illinois’ worst defeat since 2017 when the team lost 4-0 to Minnesota.

But, there were still a few high notes during Sunday’s contest.

Illinois struggled the most during the first half, giving up four goals while only scoring one. But Maryland started off strong, with midfielder Anissa Mose scoring at 4:38. Forward Alyssa Poarch scored at 14:14 to give the Terrapins a 2-0 lead.

Exactly 20 minutes later, at 34:14, Illinois sophomore forward Makena Silber got one in the goal; however, Maryland still clung to a 2-1 lead. Silber now leads the team with five goals on the season, with junior midfielder Hope Breslin and senior midfielder Arianna Veland tied for second with four each.

After Silber’s goal, Maryland scored two more times to close out the half. Maryland defender Adalee Broadbent scored both of the team’s goals, at 37:43 and 42:38. Those goals are Broadbent’s only goals on the season.

The second half featured some changes for the Illini, most notably a change at goalkeeper, with Cablk earning her first minutes on the field for Illinois. Senior goalkeeper Jaelyn Cunningham had been in the goal for the entire season up until that point.

Maryland extended its lead in the second half. Poarch netted her second goal of the afternoon at 58:06, but Maryland wasn’t done scoring. At 69:58, Maryland midfielder Loren Sefcik scored to give the Terrapins a 6-1 advantage.

In the closing minutes, Illinois’ offense finally put one in. At 85:43, Johnson-Monfort scored the first goal of her Illinois career, making the final score 6-2.

Despite the lopsided result, head coach Janet Rayfield thought the team improved on its recent play.

“Over the course of 90 minutes, we did a lot of things right today,” Rayfield said, per fightingillini.com. “We created turnovers in our attacking half, we created chances and we had more than our share of the ball. But Maryland took advantage on multiple restarts and capitalized when they had chances. We had to move people around, ask people to play in different spots and use our bench throughout the game; we responded well to that element and it was also great to see Meredith (Johnson-Monfort) get the first goal of her career today.”