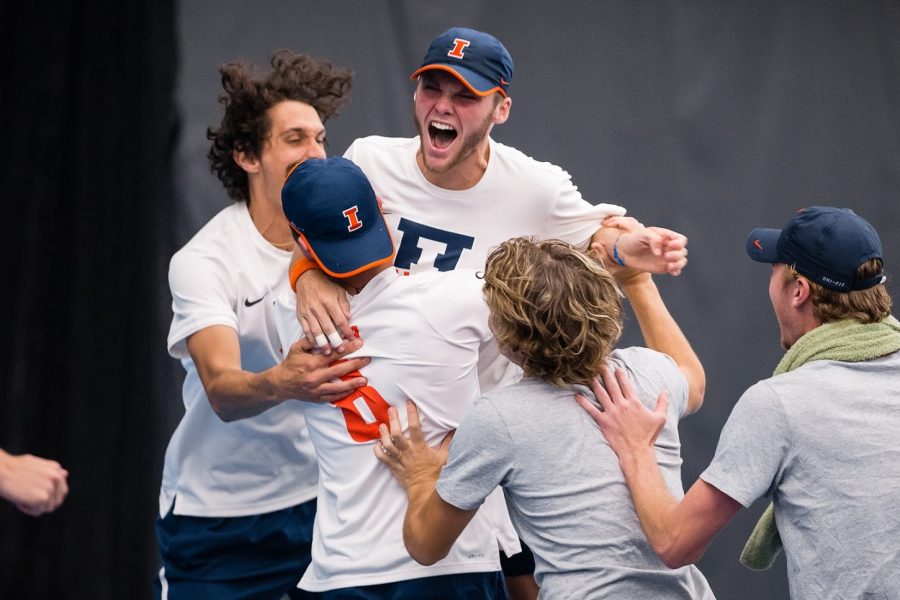 Illinois' Zeke Clark celebrates with his team after winning his singles match to end of the match against Penn State at Atkins Tennis Center on Friday, April 12. The Illini won 4-3.

Senior Zeke Clark competed at the Norman Open Series Men’s 25k this weekend, picking up three wins over the course of the tournament.

Clark entered the meet following a strong season debut in Milwaukee at the end of September. With a $25,000 prize at stake, Clark began the international tournament in the qualifying rounds, needing three wins to advance to the main draw. He entered the opening round as the third seed in qualifying, beating Oklahoma’s Matthew Rodriguez in straight sets to start the tournament, 6-2, 6-3.

Kentucky’s William Bushamuka was Clark’s final obstacle to reaching the main draw. Failing to lose a set so far, Clark continued his epic run, putting on yet another dominant display and triumphing 6-1, 6-3.

In the opening round of the main draw, Clark faced yet another international opponent, fifth seed France’s Hugo Gaston. But Clark finally met his match, falling 6-3, 6-3, to the eventual tournament champion.

Clark returns to his hometown of Tulsa, Oklahoma this week and will reunite with teammate Siphosothando Montsi as they compete in the qualifying rounds of the Intercollegiate Tennis Association Men’s All-American Championships.

Senior Aleks Kovacevic will make his debut at the tournament as well, competing in singles and doubles competition, alongside junior Alex Brown. Kovacevic enters the season ranked sixth in the country, according to the Oracle ITA Preseason National Rankings. Brown comes into the season ranked 23rd in the nation, and the tandem of Brown and Kovacevic are 19th.