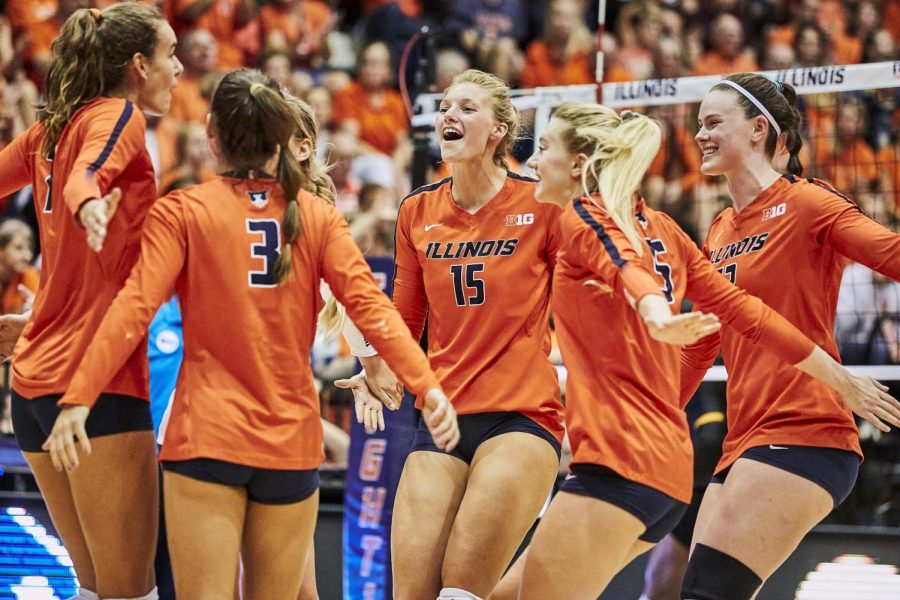 Megan Cooney (15) celebrates with the Illini Volleyball team at Huff Hall at the Illini’s game vs. Iowa on Sep 28. Although her position change has posed challenges, Cooney is using her past experiences and team practices to improve.

The Illinois volleyball team swept its first Big Ten weekend on the road, beating Indiana 3-0 on Friday before taking down Purdue 3-1 on Sunday. Leading the way on Friday was junior Megan Cooney, with 11 kills on a .588 hitting percentage. Senior Jacqueline Quade paced the Illini against Purdue with 20 kills on Sunday, but Cooney was right behind the star hitter with 19 kills.

“The sets were really great from Diana (Brown), so a lot of the moments were lined up perfectly,” Cooney said. “Then, the other moments that the set wasn’t perfect, I was able to get some shots off in lucky spots.”

Cooney, who played in all 36 matches last season, has appeared in every match for the Illini this season, starting in three. In her freshman and sophomore seasons, Cooney excelled mainly as an opposite hitter, recording 236 kills in her first season and 343 last season.

While the junior has been strong on the right side for head coach Chris Tamas, injuries and roster changes have moved Cooney to an outside hitter position. Quade might be Illinois’ go-to hitter, but Cooney has proven her abilities making the tough adjustment.

“It’s been great, and we know she has some experience with us the past two years being the opposite,” Tamas said. “She’s moved to the outside and played an important role for us and has embraced the role change. She’s learning good things out there, and she’s been having a really solid and steady performance, which you need from your outside hitter.”

Switching sides has been new to Cooney at the collegiate level, but the veteran has experience with the left side which has aided in her success.

Although connecting in different spots with setter Diana Brown has been a work-in-progress, Cooney has embraced the change, just wanting to help her team out in any way.

“It’s going well, for sure,” Cooney said. “Just working on it every day in practice and getting my connections down with (Brown) has been really key. Just practicing every different scenario I can get in a match, replicating it over and over again in practice has really helped me.”

While working on new shots and adjusting to different angles has been the focus for Cooney through this transition, the Topeka, Kansas native has also been a consistent force at the net for Tamas’ squad.

Cooney has recorded at least two blocks within the past five matches, notching a season-high four kills against Nebraska on Sept. 27. The junior totaled 88 blocks than 76 in her freshman and sophomore season, respectively.

“It’s great playing right next to her all the time,” said middle blocker Ashlyn Fleming. “I love blocking with her. We’re always similar in the motions that we do. Just having her on the different side, it’s nice knowing she’s going to be right there in the block with the middles. She’s just taken on the challenge, and it’s great to see her getting better each week.”

Settling into her new role on the outside throughout the start of the season has been the focal point for Cooney individually, but the team is still her main focus.

The Illini suffered a slow start to their nonconference season with four straight losses, but with players like Cooney solidifying their roles in the rotation, the team has seen quick growth.

“It’s been really special for us,” Cooney said. “We’ve grown a lot from the preseason when we weren’t meshing as well together. Just having all of those little growing moments, like Chris said, we never really lost we learned. That’s accurate, and whatever we didn’t think was meshing well, we worked on it the next day at practice. Now, we’re where we are today and still working on bettering ourselves and going after our opponents with all we’ve got as a team collectively.”