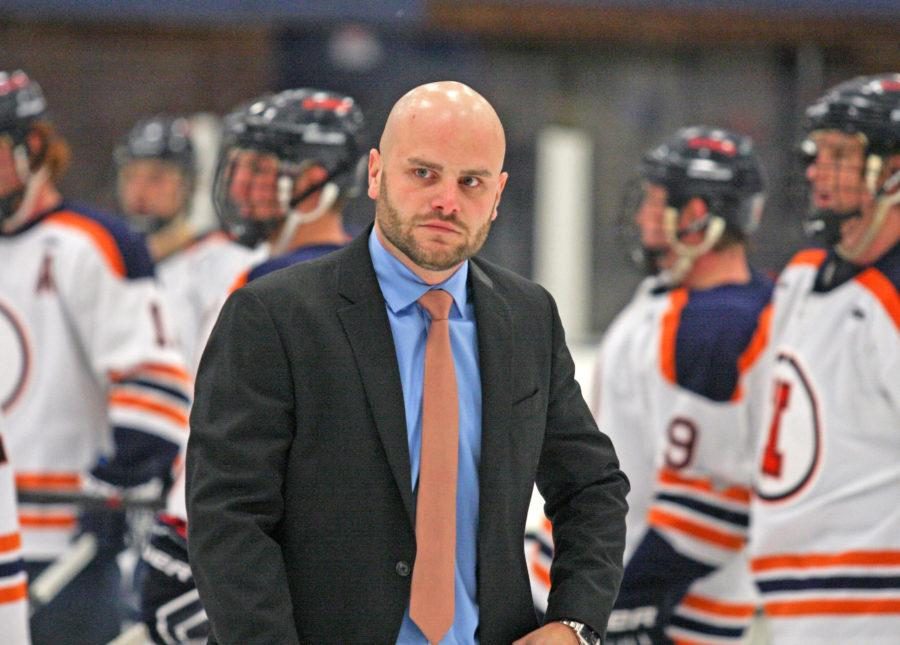 Illinois’ Nick Fabbrini walks back to the bench after the Ohio hockey game at the Ice Arena on Oct. 24, 2014. The Illini won 2-1. Fabbrini said adding hockey as a Division I team would be an historic event and would greatly improve the program.

Competing at the Division I level comes with perks. It comes with new facilities, a larger talent pool and the opportunity for the University to strengthen its brand.

After years of discussion, Illinois’ club hockey team may be on the verge of enjoying these perks. Illinois’ Department of Intercollegiate Athletics has teased the dream of the school’s club hockey team turning into a Division I program, citing the impact it could have on the University and the Champaign-Urbana community. Illinois club hockey head coach Nick Fabbrini couldn’t agree more.

“It would be a huge deal, historic obviously, as it would be the first Division I program in the state of Illinois in 25 years,” Fabbrini said. “It’s a great opportunity for the local community and even the state.”

Fabbrini is entering his eighth season as the head coach of the club hockey program. Fabbrini, an Illinois alum, calls this a “dream job” and cherishes the opportunity to lead the program he played for during one of its most successful seasons in school history. During his playing career at Illinois, Fabbrini help lead the Illini to four National Semi-Finals appearances, including two national championships in his freshman and senior seasons, the latter of which they finished 38-0.

“To get to represent a school that has such a big piece of my heart and try to give these guys the experiences I had as a player is great,” Fabbrini said. “It is a really special place to play and coach.”

Fabbrini’s path to getting the head-coaching job didn’t start with coaching full time. After one season as a graduate assistant at his alma mater, Fabbrini moved to Chicago to accept the job of store manager at Gunzo’s Sports Center, a hockey store, while also working as  an assistant coach at Fenwick High School, where he previously attended. Then, after two years as an assistant coach, Fabbrini was able to land the Illini job, despite just being 27 years old.

During his tenure as head coach, Fabbrini has led Illinois to consistent success, establishing it as one of the premier club hockey teams in the nation. Fabbrini knows being granted Division I status would be a complete game-changer for the University.

“Obviously, we would get new facilities and scholarships,” Fabbrini said. “We are talking about a whole new caliber of players who would come here. With the talent here at Illinois, we lose like 80-90 players every year to Division I programs. The interest would be right off the bat.”

But despite the noise and excitement for a potential Division I hockey program at Illinois, Fabbrini said he blocks it out and continues to coach the club team to the best of his ability every day. He realizes the change could be a long time away and is focused on his current players.

“It’s not something we worry about,” Fabbrini said. “ We just try to go out and get better every day.”

Illinois is currently 3-1 after splitting the weekend series with Michigan State. The Illini are preparing for their first road trip of the season, taking on the Central Oklahoma Bronchos in a two-game series.