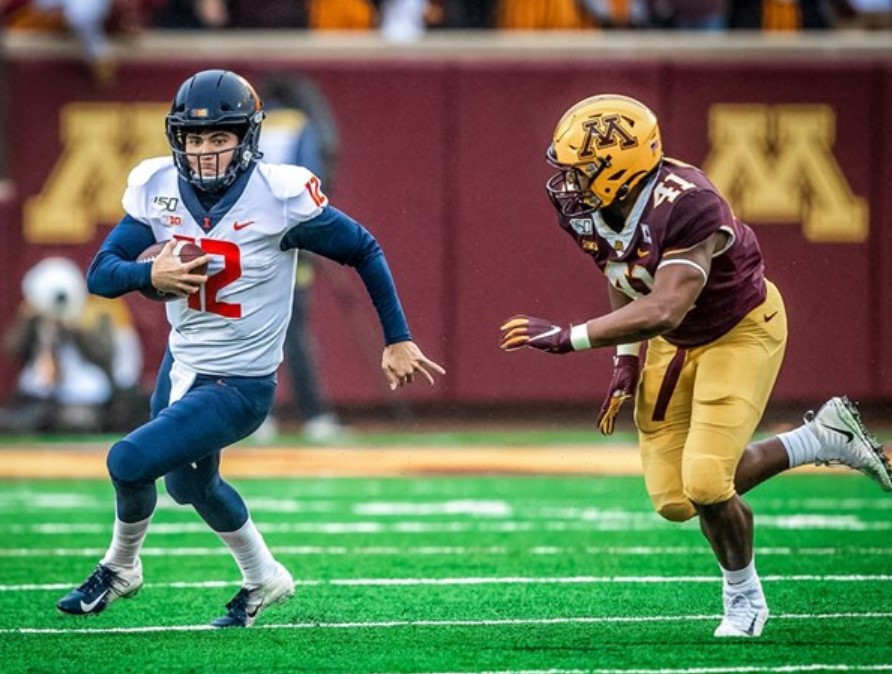 After a brutal 40-17 loss at Minnesota last Saturday, Illinois receives no let-up as No. 16 Michigan comes to Champaign for the first time in eight years. The biggest issue plaguing the Illini at the moment is tackling, as opposing teams are making a living earning yards after contact against Illinois’ defense. For quarterback Brandon Peters, the Wolverines are a familiar opponent as the current Illini signal-caller spent three years with the Michigan program before transferring to Illinois. While Wisconsin may have a more in-sync unit, this game will put the Illini at the greatest talent deficit it will face all season.

Turn on the tape from any of the past three consecutive losses and a common theme reveals itself: missed tackles. The Illini defense has allowed at least 480 total yards in each of its last three games, and missed tackles are to blame.

“Don’t know what else to tell you,” said head coach Lovie Smith. “How do big plays happen? Missed tackles,”  “We’ve had too many missed tackles; we’ll continue to work on it.”

The Illini’s tackling issues during the losing streak have stemmed from two key factors: trying to account for a mobile quarterback while defending the zone-read concept and facing multiple quality backs that can consistently get to the second level and wear down the unit. Unfortunately for Illinois, Michigan’s offense boasts both those characteristics, and the Illini could be in for a long day making tackles in space on Saturday as a result.

Prior to arriving at Illinois, Brandon Peters was originally touted as the next in line quarterback to take the reins at Michigan.

After redshirting in 2016, Peters was thrust into the starting position after injuries to those in front of him. The Avon, Indiana, native performed relatively admirably, going 2-2 as a starter and finishing with four total touchdown passes.

After failing to hold down the job with the arrival of Shea Patterson from Mississippi, Peters decided to search for more playing time elsewhere. Yet he still wanted the opportunity to compete against his former teammates.

“He knew that Michigan was on the schedule when he decided to come here,” Smith said. “Nothing has changed; it’s Michigan week now, so I know he’s pumped up. (I am) hoping he will be ready to go this week.”

However, Peters picked up an injury early on against Minnesota last Saturday, and his status for this week’s game is up in the air at the moment.

Should Peters be unable to go, redshirt freshman Matt Robinson will likely be the guy for Illinois.

Robinson relieved Peters of his duties to the tune of 125 passing yards at Minnesota, failing to lead the offense to a single touchdown.

“I thought (Robinson) did OK,” said offensive coordinator Rod Smith. “He battled. He didn’t play clean, but for his first true time, in terms of importance, I thought he went in and gave us a little bit of a spark and moved the ball.”

Robinson’s above-average mobility may serve him well if he is forced in on Saturday, as the Michigan defense will likely be coming after him in a hurry.

Freshman Isaiah Williams is also a candidate to see the field if Peters is held out, but the four-star recruit is currently battling injuries and can only appear in three more games to maintain his redshirt status.

While its performances have not been the most convincing early on, especially on offense, Michigan still has a realistic path to be playing Ohio State in the final week of the season for a berth in the Big Ten Championship game and likely the College Football Playoff, a situation it has found itself in during two of the past three seasons, falling at the final hurdle both times.

The Wolverines were often criticized for playing an archaic, conservative pro-style offense that left them with no chance of competing against teams with equal or greater talent than them in coach Jim Harbaugh’s first four seasons, and he subsequently decided to make a change this off-season.

Harbaugh brought in Josh Gattis from Alabama to run a more up-tempo, spread offense in hopes of competing on a national level, but the new system has not worked thus far.

The Wolverines have been unable to consistently move the ball or pass downfield against quality opponents this season, scoring a combined 24 points against Wisconsin and Iowa. Saturday may serve as a game to help get their offense on track, however, as the defense is currently a unit in need of much improvement for Illinois.

Shea Patterson will lead the team at quarterback, while freshman Zach Charbonnet will lead a stable of talented backs for the Wolverines. The freshman is a big, bruising runner who will present problems to an Illinois team that struggles with wrapping up after the first contact.

Although they’ve not been able to take advantage of it thus far, Michigan boasts arguably the best trio of receivers in the conference, all of whom are highly rated recruits that will likely play in the NFL in the near future. Three juniors, Nico Collins, Tarik Black and Donovan Peoples-Jones, all have the ability to use their athleticism and big frames to go up and snatch the ball away from defensive backs, an opportunity that will likely unveil itself against a depleted and underperforming Illini secondary.

Defensively, the Wolverines are as strong as ever, coming off of a 52-0 shutout against Rutgers and a 10-3 suffocation against Iowa. Renowned Defensive Coordinator Don Brown is known for sending numbers after the quarterback, leaving his defensive backs in man coverage most of the time.

Kwity Paye and Aidan Hutchinson will come after whoever Illinois trots out at quarterback, while senior All-American Lavert Hill and five-star freshman Daxton Hill will try to take away the Illini’s receivers.

Though the noise surrounding Lovie Smith’s job security is getting louder and louder as the losses pile up, Saturday’s contest may not be a game to hold against the current Illini coach, as his team will be out-manned in both talent and depth at just about every spot on the field.