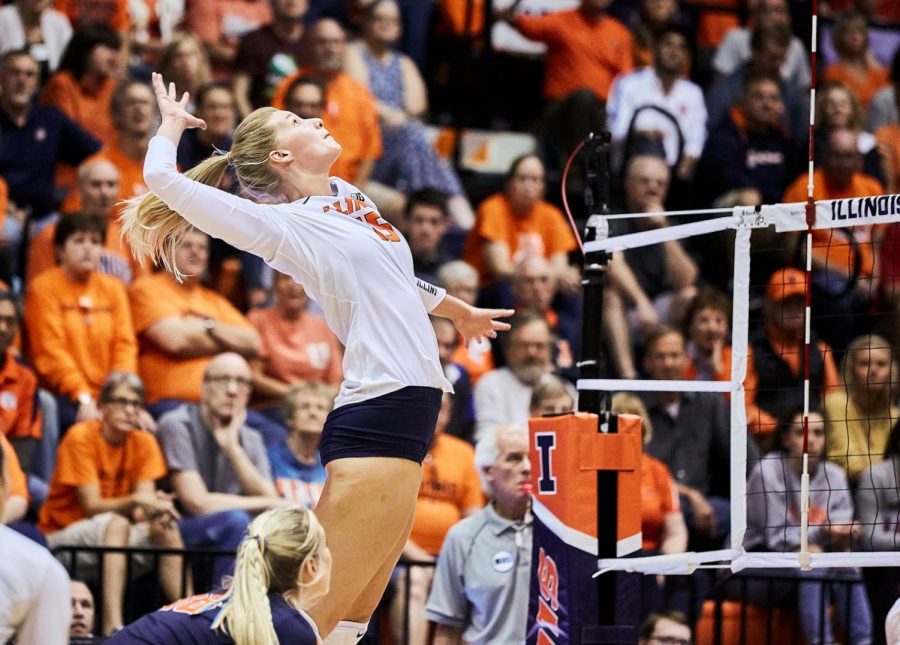 Megan Cooney rises up to spike the ball on Wednesday. The Illini lost 1-3.

The No. 17-ranked Illinois volleyball team (8-6, 3-2) were on a three-match win-streak before hosting the No. 6 Minnesota Golden Gophers (11-2, 5-0) in a Wednesday night match at Huff. The Illini lost to Minnesota three sets to one, only picking up a win in the third set.

In the first set of the match, Illinois struggled against the Minnesota defense. The Illini scored only 11 kills on a .079 hitting percentage and had eight attack errors to go along with it.

The struggles offensive struggles of the Illini carried over to the beginning of the second set. The Illini could not get past the Minnesota frontline, causing a 24-17 deficit in the set. The Illini went on an 8-0 run to give themselves a 25-24 lead. The set went back and forth after that but ended in a 29-27 win for Minnesota.

“I think we were just putting a lot of pressure on their side of the net,” said senior Jacqueline Quade. “Just having a sense of urgency from the beginning (of the third set), and I think in the third set, I think we were able to expose a lot more of their weaknesses as a team.”

In the fourth, the Illini fought to force a fifth set, coming back from trailing all the fourth set to being tied 23-23. The comeback attempt fell short, however, as Illinois fell in the fourth 25-23.

A bright spot for Illinois came in its service ace to service error ratio. Aggressive serving has been something head coach Chris Tamas has stood by consistently. Against Minnesota, the team scored nine aces, while only recording eight service errors. In comparison, in a win against Tennessee earlier this season, the team got five aces on 17 service errors.

“Even if you’re seeing a one to two ratio, you’re in pretty good shape,” Tamas said. “Especially if the other balls are taking (the other team) off the net. The system we play is fairly aggressive in that regard, and we want to be able to do that. Some teams like this that are maybe a little more physical than us, we need to keep them off the net.”

Sophomore transfer from Auburn, Mica Allison, was also able to make an impact on both sides of the net while playing out of her usual position. Allison, who is listed as a setter, recorded seven kills on 22 attacks, two block assists and a solo block.

Allison, who wasn’t expecting to be hitting, has moved into that position in the last few matches for the Illini.

“In practice, I’m only working on hitting right now,” Allison said. “So, it’s just a lot of fun because I’ve never been coached in that position, It’s always been setting, and then hitting has come as like a second thing. So being in practice, and like being able to work on different shots and stuff is really fun for me.”

The team has a few days rest before Indiana comes to play at Huff on Saturday. The team is 1-0 in the season against the Hoosiers, and are looking to make it 2-0 to finish off the series.