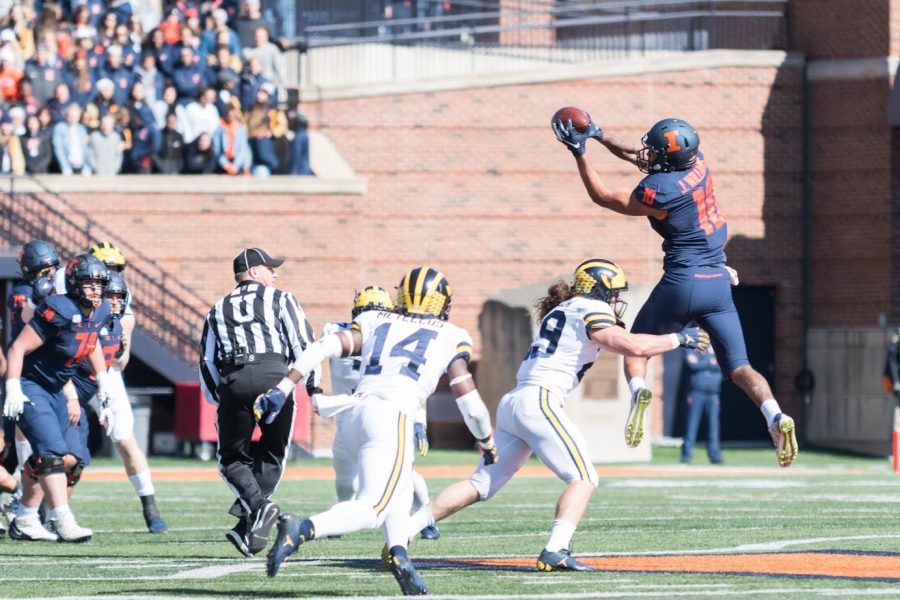 Illinois tight end Justice Williams jumps for a reception during the game against Michigan on Saturday, Oct. 12. The Illini lost 25-42.

“Everyone could use a little bit of Illinois here and there.”

That’s what Rob Stone casually said of the Illini after they were down 28-7 against the Wolverines at halftime.

Following their fourth straight loss of the season, the Illini went through a rollercoaster of a game, swaying between epic comeback and a soulless flogging. There aren’t many positive takeaways from this game, but here are some notes:

The First Half: F

It’s as clear as day this team doesn’t produce consistently without Brandon Peters in the starting lineup. Freshman quarterback Matt Robinson- — more on him later — was off to an incredibly sluggish start. And, in a probable blow to his confidence at quarterback, offensive coordinator Rod Smith turned to true freshman Isaiah Williams to try and find answers. Long story short, neither seemed like he knew what to do with the ball, and the offense suffered. Illinois’ struggle in the passing game wasn’t much help either.

Senior running back Reggie Corbin passed Red Grange in all-time Illini career rush yards, but that was the only positive for the offense going during the first quarter. At every turn, a penalty, dropped pass or incredibly small gain in yards bullied the Illini just as much as the Wolverine defense did.

For a while, it seemed like the Illini were going to mirror their 63-0 blowout loss against the Hawkeyes last season. However, in one sequence, the Illini showed some signs of life with a 65-yard drive that culminated into a 23-yard run into the end zone for Josh Imatorbhebhe at the end of the half. But by that point, the Wolverines already had 28 points of their own.

To put things into perspective, the Wolverines didn’t actually punt the ball on a fourth down until around the five-minute mark of the second quarter. They went nearly a whole half doing just about whatever they wanted to offensively.

To be fair, some sequences aren’t entirely on the defense, like the blocked kick from punter Blake Hayes that sailed backward into the Illini end zone and put the Wolverines at first and goal. They scored on their first possession, giving up 65 yards in a two-minute time span. Later, another 28-yard gain from Haskins turned into another touchdown.

By the grace of a missed tackle, something head coach Lovie Smith has acknowledged the team has needed to improve upon, Michigan turned one mistake into a 70-yard gain. The loss was tough, especially since it comes a day after the unveiling of its greatest linebacker Dick Butkus’ statue.

The Third Quarter: A

The second half fared better for Illinois. The Illini forced three straight punts and began to look like the team Smith had in mind coming into training camp. There were other instances of brilliance as well, such as a 50-yard field goal from James McCourt and, later ,a 31-yard pass completion from Robinson to Imatorbhebhe, which put the Illini in the Wolverines’ endzone. The Illini struggled to finish the drive off, but a holding and offsides call at the goal line proved to be too much to handle.

As for the defense, it held the Wolverines scoreless for a full quarter. Holding on to the football for seven minutes, Matt Robinson came alive and trekked the Illini 80 yards all the way to the end zone across 15 plays to close out the period down just 28-17.

“We got it together some kind of way in that third quarter. You’re down 28 points and you get the game back to within 3 points, that’s saying an awful lot,” Smith said. “I’m proud of how the team played at the end, but we’ve got to figure out a way to finish games. It’s good to play well at times but we need to do it consistently.”

Some of the third quarter spunk the Illini were playing with briefly carried over into the fourth period, but after the early touchdown off of Dre Brown to cap off a 25-0 run and cut the lead to just 3 points, the Illini buckled. All the hard work put in unraveled in the fourth-quarter. The back-breaker was a drop in the Illini end zone turning into a second fourth quarter touchdown after giving up another touchdown just a few moments earlier.

The score ended at 41-25 in favor of Michigan, but for a period of time, it was all Illinois. But the Illini’s bright spots were drowned out by 489 yards, 95 yards lost to penalty, and a sea of yellow and navy blue.

All things considered, this was a solid debut for the freshman quarterback. He hit a rough patch early on with his play, but in the abyss of the first half, he failed to shine until the very end. Robinson was also sharing playing time with Williams, who has continued to struggle as a freshman, recording zero completions on four attempts and gaining zero yards with only one sack.

Illinois came out of the locker room at halftime with a chip on its shoulder. And that was especially true for Robinson’s third quarter. He ran the touchdown, which brought the Illini back into the conversation and found wide receiver Imatorbhebhe for double-digit gains in yardage on multiple occasions.

“I think that third quarter was the one of the best stretches of offense we’ve had.” Robinson said. “We kept scoring and brought ourselves right back into the game all the way up into the fourth.”

He finished the afternoon with 192 passing yards, completing 16 of his 25 attempts to go with his own touchdown. It’s unknown how often Illini fans should expect to see Robinson start, and Peters’ status remains unknown after missing Saturday’s action with a concussion, but this is something Robinson and the rest of the offense will certainly look to build off of.

“This start definitely gives me a lot of confidence in my abilities,” Robinson said. “Now that I have that under my belt, that experience will help down the road.”