Illini close in on Wolverines, fall 42-25 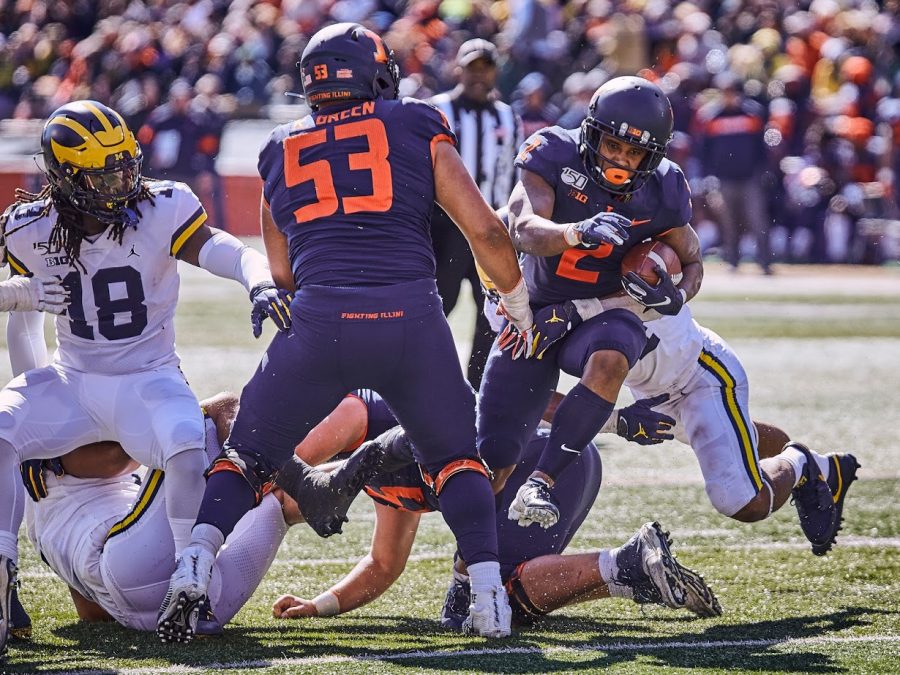 Illinois tight end Justice Williams jumps through Michigan defenders during the game against the Wolverines. The Illni lost 42-25.

Ahead of Saturday’s matchup against No. 16 Michigan, Illinois fans were fearing a scoreline similar to senior day 2018 against Iowa, especially when Illinois announced it would be donning the same uniforms it wore that day. While it looked as though things were headed the same direction early on, the Illini got it together, but they still fell short to the Wolverines 42-25.

The Wolverines came out of the gates looking unstoppable. They ran the football five straight plays to open up, moving the ball 65 yards and finding the endzone through Hassan Haskins.

Without quarterback Brandon Peters, the Illini struggled to move the ball offensively, failing to pick up a first down until their third drive. The Wolverines doubled their lead at the end of the first quarter when Shea Patterson found tight end Luke Schoonmaker for a 25-yard touchdown pass, the first touchdown reception of Schoonmaker’s career.

A blocked Blake Hayes punt set up a 7-yard touchdown run from Zach Charbonnet in the second quarter, and after Patterson found tight end Nick Eubanks from 4 yards away, Illinois found itself trailing 28-0 with 4:33 remaining in the half.

The offense didn’t lie down, however. Redshirt freshman Matt Robinson made his first career start and led the Illini down the field, finding Josh Imatorbhebhe in the red zone after scrambling free from pressure, with Imatorbhebhe catching the pass and using his strength to bulldoze his way into the endzone.

Down 28-7 going into the break, the Illini were overmatched, but things flipped in the third quarter.

After forcing a three-and-out, the offense went and tacked on a field goal. Then Illinois took advantage of a Michigan turnover on downs to drive the ball 80 yards on 15 plays to score a touchdown courtesy of Robinson from a yard away.

Two plays later, Stanley Green recovered a fumble by Tru Wilson, and the Illini used the short field and eventually ran in another score, this time through Dre Brown. Brown converted the following two-point play, and in the blink of an eye, the score went from 28-0 to 28-25 with over 12 minutes left to play.

“We got it together, some kind of way in the third quarter,” Smith said. “You’re down 28 points and you get the game to a three-point game in the second half, that’s saying an awful lot.”

Despite Illinois’ best efforts, Michigan was not to be denied. The Wolverines’ ensuing drive saw them go 79 yards and score a touchdown, courtesy of Donovan Peoples-Jones making a diving catch to beat Nate Hobbs.

In Illinois’ first play of the next drive, Robinson fumbled, and Michigan recovered deep in Illinois territory but turned the ball right back over to Illinois on downs four plays later.

The Illini fumbled the ball right back to the Wolverines just two plays later though, and Michigan scored on the next play on a Patterson sneak. Before long, the hopeful 28-25 deficit turned into a daunting 42-25 Wolverine victory.

“This defense showed a lot of fight today,” said defensive back Stanley Green. “We made some mistakes in the beginning. We just gotta correct (them). We had some bright spots, but we just gotta get better from here.”

Illinois did a respectable job limiting Michigan’s passing game, albeit one, which hasn’t been very successful this season but simply had no answers for the Wolverine’s rushing attack.

Haskins and Charbonnet each ran for over 100 yards with a touchdown, and the Wolverines as a team finished with 295 total yards rushing. Again, poor wrapping up on tackles after the first contact plagued the Illini, which was especially evident on Haskin’s opening touchdown run.

Offensively, Robinson took advantage of the favorable positions his defense put him in through takeaways and looked far more confident in his first start than he did in mop-up duty at Minnesota last Saturday.

“I thought it was pretty fun out there; I had a good time,” Robinson said. “Thought we played pretty well, came up a little bit short, but I thought as an offense we did a pretty good job.”

Robinson finished with 192 passing yards and a touchdown, plus he added another score on the ground.

Given he was facing a top-ranked defense that had allowed three total points in its last two games, the performance from Robinson was certainly better than what could have potentially happened, especially after the first quarter.

“Being down 28-0, you know they’re gonna pin their ears back and come,” Smith said. “I thought Matt was poised, composed and made plays when he needed to.”

True freshman Isaiah Williams also saw time, but the East St. Louis native didn’t appear to yield the confidence in his arm to legitimately scare opposing defenses yet, as he faced more stacked boxes and could only run for four total yards.

The 2-4 Illini may be wondering what the result would have been had the offense clicked in the first half. But, it only gets tougher for Illinois. Undefeated Wisconsin comes to town for Homecoming next week.