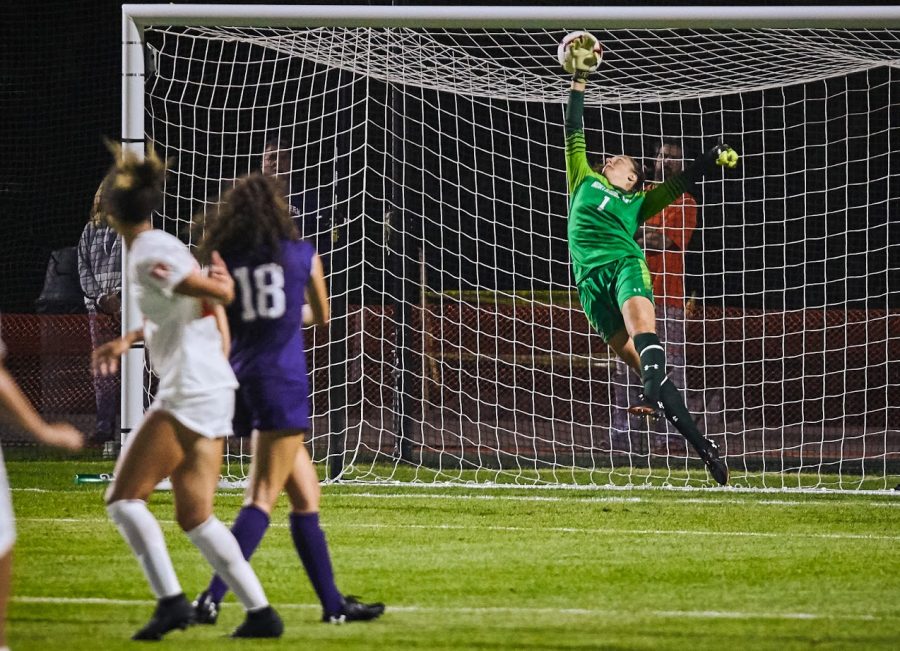 Elizabeth Cablk defends the goal at the Illini Soccer field on Sep. 20 against Northwestern. When she's not on the field, Cablk enjoys baking.

Illinois junior goalie Elizabeth Cablk has always been a goalkeeper. She started playing soccer at a young age, and by the age of 10, she stood out among her peers in the goal. But Cablk’s earliest memory of her sport involves her being far, far away from the net.

Playing goalie may draw in young players, who often get to wear oversized neon shirts and don’t have to run. Cablk, however, was drawn to the goal for other reasons.

“Originally, I was the only one on my team who wasn’t afraid of the ball,” Cablk said. “You have to have a screw or two loose to play goalkeeper, and I was the only one that had that at age 10. With that came some natural ability, but mostly it was instinct, courage, I think, and then that position ended up sticking for me.”

Cablk said she specialized in being a goalie at 10 years old, which is relatively uncommon. Goalies are also in a place with a lot of potential for injury, so Cablk added they have to be willing to deal with the risks.

“It’s a position that involves so much risk, so much possibility for bodily injury,” Cablk said. “I had a goalkeeper coach who always joked with me that goalkeepers were just, like, the looniest ones out there because you have to be daring to get out there and do that position. But over the years, it’s definitely become something I have been very proud of. I’m proud to have that quality; I’m proud to be able to step up in that role.”

She said while she had fast reflexes which made her a good goalie, she credits the people around her for her development as a player.

Cablk grew up in a soccer household. Her father played soccer in his youth, and Cablk is a big fan of former U.S. Women’s National Team goalkeeper Briana Scurry. Scurry was the goalkeeper on the 1999 World Cup-winning team and played every minute of the tournament.

“She’s such an inspiration to me just because of the strides she made for women of color, for women in sports,” Cablk said. “What she did was unimaginable. I know a lot of people like to put Hope Solo in the spotlight, but she was a big part of someone who brought soccer to the forefront of American society and really paved the way for people like me to pursue their dreams.”

She gave up an average of 0.25 goals per game during her junior season and finished her high school career with 38 shutouts. Cablk isn’t the only Naperville North grad playing for the Illini; sophomore midfielder Katelynn Buescher has played with Cablk since the two were in middle school.

Even though Cablk posted solid statistics in high school, she suffered some adversity along the way.

“It’s hard when you play goalkeeper,” Cablk said. “You get in situations where you have some injuries, and then that shakes your confidence a little bit. So I remember early in my high school career, I tore my PCL in my right knee on a breakaway save, so it took me a few years to, like, work back and work on that technique because obviously, an injury that’s that serious can be a little bit traumatic, but I mean every day, every day I’m focusing on confidence.”

In college, Cablk hadn’t played one minute until Sunday. While she was in the goal for the second half, Cablk made two saves in her 45 minutes of playing time. She also gave up two goals, leaving her current goals-allowed average at 4.00 per game.

Buescher said Cablk’s decision to go to Illinois didn’t influence her decision to play at Illinois but has found Cablk’s presence to be an added bonus.

Pre-game, Cablk likes to arrive early, so she gets a few minutes of peace and quiet before people get there, and she starts AUX duty.

Cablk said goalies have to lead since they can see things their teammates can not. While Cablk is the current backup goalkeeper for the Illini, she takes a leadership role when it comes to pregame music.

For most young people, running the AUX cord is an important duty — if you play a bad song, you are not going to be handed the cord in the near future. Cablk has honed this skill during her time at Illinois and can usually find the proper song to put on.

“I really enjoy taking over the AUX cord in the locker room and taking the responsibility to get the team hyped up,” Cablk said. “I always put my equipment on in the same order. That’s like a little, I would say, like a little quirk.”

Cablk likes to put on 2000s music, featuring artists such as Usher and Flo Rida. She also adapts to her teammates’ requests; senior goalkeeper Jaelyn Cunningham enjoys Post Malone, which is played in players’ cars from time to time.

When Cablk is not in charge of the AUX cord, Cablk tries to catch up on sleep. On her Illinois Athletics biography, baking is listed as a hobby of hers, but she doesn’t have much time to make desserts on campus.

Cablk, a Naperville, Illinois, native, bakes cookies with her mother when she is home from college. In her time away from soccer, she likes to watch the Cubs and Bears as well as spend time with her family, including her younger sister, Megan, who is still in high school.

Cablk said she baked more when she was her sister’s age but was never going to make a business out of it. Some people might make a YouTube channel or have an Instagram page to show off their work, but Cablk was a casual baker in her spare time.

“I really enjoy holiday traditions,” Cablk said. “My grandmother was always very big on baking and that’s, like, a way we spend time together as a family, so I do enjoy that when I go home with my mom and my sister.”

With her busy schedule, Cablk finds ways to stay involved in the campus community away from soccer. As a finance major, she is involved in the business fraternity, Phi Chi Theta, and the Finance Academy, which is an invitation-only enrichment program for finance students.

Cablk has focused her post-college goals to the business world, starting in finance but switching gears to eventually go to law school. Although she isn’t certain of what field of law she would like to specialize in. She is leaning toward financial law.

“I’m currently a finance major here but in the pre-law program,” Cablk said. “The goal is to hopefully work for a few years, get some professional experience, make some money and then go back to law school.”

Although she could be swapping her cleats for a briefcase in the not-so-distant future, Cablk has always enjoyed soccer.

“I think I really did have that internal love of the game from the beginning,” Cablk said.