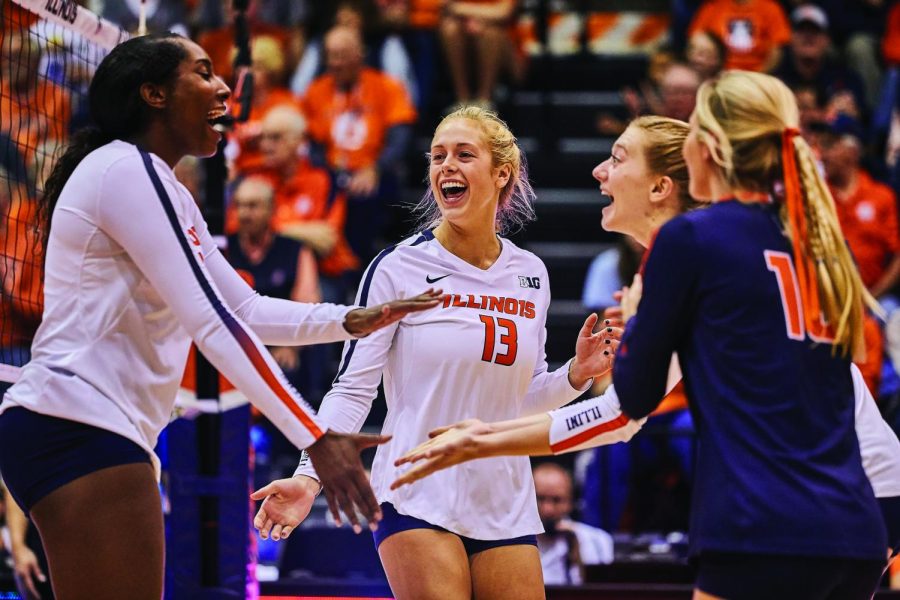 Mica Allison (13) celebrates with the Illini volleyball team after scoring a point at Huff Hall against Indiana on Saturday. Allison, who transferred from Auburn University this season, brings a variety of position experience to the table.

Sophomore transfer Mica Allison is halfway through her first season with the Illini and just completed a four-match stretch where she consistently played hitter, a position she hasn’t played her whole college career so far.

“(Brown) just had a little bit of a leg up in having been in our system for a year behind Jordyn (Poulter),” said head coach Chris Tamas. “She was able to watch a lot of what we did and what we talked about.”

The competition between the two setters was close, but Brown’s redshirt year gave her the experience she needed to secure the position.

Brown has also kept the spot by becoming a leader in the setter position. She earned Big Ten Conference Co-Freshman of the Week in early October after scoring two back-to-back double-doubles against Indiana and Purdue, averaging 11.71 assists per set in those two matches.

The combination of Allison not being able to start at her usual position and early injury struggles left her without a lot of playing time for the first stretch of the season. That changed when she was inserted into the hitter position in the team’s first match-up against Indiana.

Allison put up seven kills on a .357 hitting percentage and two blocks to help the team secure a sweep in Bloomington.

“She’s got a really strong arm, so she can hit the ball hard,” Tamas said. “And being a lefty helps on that side of court, too. She’s got a really impressive array of shots as well, and you don’t always see that from players.”

In practice, Allison said she has started focusing only on hitting after switching to that position. Hitting is something she has never focused on, so her learning new shots is something she sees as being a fun experience.

In the team’s last match against Indiana, Allison started all three sets at the hitter position and was able to put up 7 kills on a .462 hitting percentage. Over the last four matches for the Illini, Allison has averaged 7.5 kills per match and 2.75 blocks per match, and the team has gone 3-1 in that stretch.

“I find hitting fun,” Allison said. “I feel free when I’m doing it. It’s fun to try to compete against the other person on the other side and (Brown) is doing a really good job of getting us open.”

All-American hitter, Jacqueline Quade, credited Allison with being able to “go after it” and not playing tentatively on the attack.

Versatility has been something that has been a focal point for Tamas’ Illinois team. Multiple players, like Megan Cooney, are able to play different spots and positions on the court. Allison has fit into this style of play that Tamas has focused on.

Tamas talked about how adding Allison to the rotation has put another player on the court that has a good understanding of multiple areas of the game.

“We just look for players that can play the whole game,” Tamas said. “We want players that have strong skill sets and a good volleyball IQ on the court. I think both of them (Brown and Allison) do that really well for us. Anytime you get players that can do everything and kind of command the court in that way, I think it just adds to your overall team IQ, and we’re seeing that over the last handful of matches.”