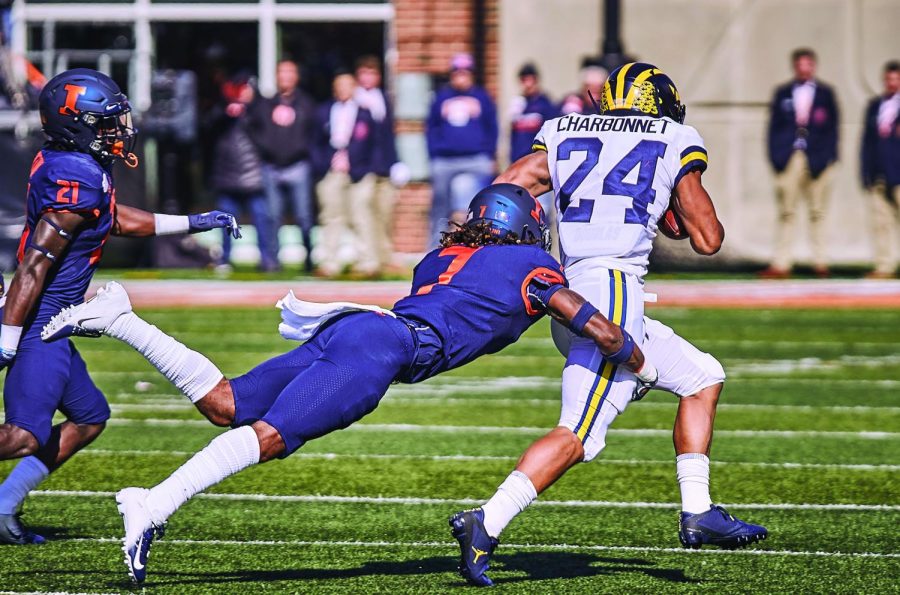 Illinois quarterback Isaiah Williams attempts to outrun Michigan defensive lineman Michael Danna during the game on Saturday. The team came away from the Michigan matchup encouraged by the action in the third quarter.

After a third-quarter comeback that left Jim Harbaugh and his team sweating it out in the second half Saturday, head coach Lovie Smith had a few positive takeaways from his team’s 42-25 loss to No. 16 Michigan, which is more than what can be said about the Minnesota game before that. The Illini are dealing with health issues at quarterback and will have to be confident in whoever they turn to this Saturday, as the No. 6 Wisconsin Badgers and their vaunted defense come to town.

Although his team fell short on Saturday, Lovie Smith came away from the performance encouraged by what he saw in the third quarter, in which the Illini offense tallied 18 consecutive points and had the Wolverines within a field goal with 12 minutes remaining.

Though the 2019 campaign has likely fallen short of reasonable expectations both internally and externally so far this year, Smith wants to reaffirm his player’s strengths to keep their confidence high.

“(There are) a lot of negatives that you can reach for. You can go in that black hole if you like,” Smith said. “But for us, I want the guys to see what we can be.”

Though the Illinois defense has not nearly improved enough this season, Smith individually highlighted the play of linebacker Jake Hansen and safety Stanley Green, specifically in forcing turnovers, something he’s constantly preached as a necessity for success.

The Illini’s remaining schedule is rather unkind, and tangible improvements in terms of wins and losses may not show up this season. But Smith wants to be able to walk away from each game being able to take away something positive from here on out..

After flirting with an unthinkable upset a week ago, Matt Robinson certainly bounced back from his outing at Minnesota in which the redshirt freshman looked uncomfortable and constantly gave up on plays developing.

However, Smith made it clear who he would turn to if all quarterbacks were fully healthy.

Peters is going through concussion protocol this week; therefore, the coaching staff is likely to be very cautious in terms of rushing him back on to the field.

In the event Robinson is forced into duty for a third straight week, offensive coordinator Rod Smith is hoping the young signal-caller can build on the flashes he showed during Illinois’ 25-0 scoring run on Saturday, where he threw for 192 yards and scored two total touchdowns.

“Every game puts more confidence in (Robinson) as well,” Rod said. “I’ve seen and know what he can do, I think. Sometimes, it’s a matter of if the kids believe more so than if I believe. The more he goes out and has success and can make plays and do some of the things he did, particularly against a highly rated defense, it’s gotta give him confidence.”

Either quarterback, or even freshman Isaiah Williams, if he’s available, will have their work cut out for them facing a Wisconsin defense that has posted four shutouts so far this year.

Playing in the Big Ten West certainly causes skepticism among media and fans toward teams that win the division, but this year’s Badgers appear to be more than just a group that beats up on the Big Ten’s basement dwellers.

Wisconsin, 6-0, has rolled through its schedule thus far, winning each of its games by at least two possessions (and frequently far more than that).

Under Paul Chryst, the Badgers have usually played good defense, and their profile offensively usually propels an inflated stat line for whoever their running back is in a given season.

This season appears different, however, as Jonathan Taylor is proving to possibly be the only non-quarterback with an actual shot at the Heisman Trophy.

“You start with Taylor, arguably the best player in college football,” Lovie said. “He’s excellent running between the tackles; he has size; he can hit you with power, (and) he’s faster than most people.”

Taylor has run for 825 yards and 14 touchdowns so far this year in just six games and has demonstrated all the necessary skills to be successful at the running back position. The junior is making a case to be the rare running back that goes in the first round of the NFL draft, but he will need a strong, consistent finish to the season to do so.

Having Taylor alone would be enough to keep the Badgers competitive in the West Division, but Wisconsin’s defense is also among the best in the country, allowing an astounding 5.8 points per game on average.

“I’ve watched what they do; they’re not reinventing football (or) anything like that,” Lovie said. “They’re just where they’re supposed to be. They play hard together.”

Similar to last week’s game with Michigan, expecting an Illinois win against Wisconsin is unrealistic, but another competitive game that has drama into the fourth quarter could be seen as a step in the right direction.