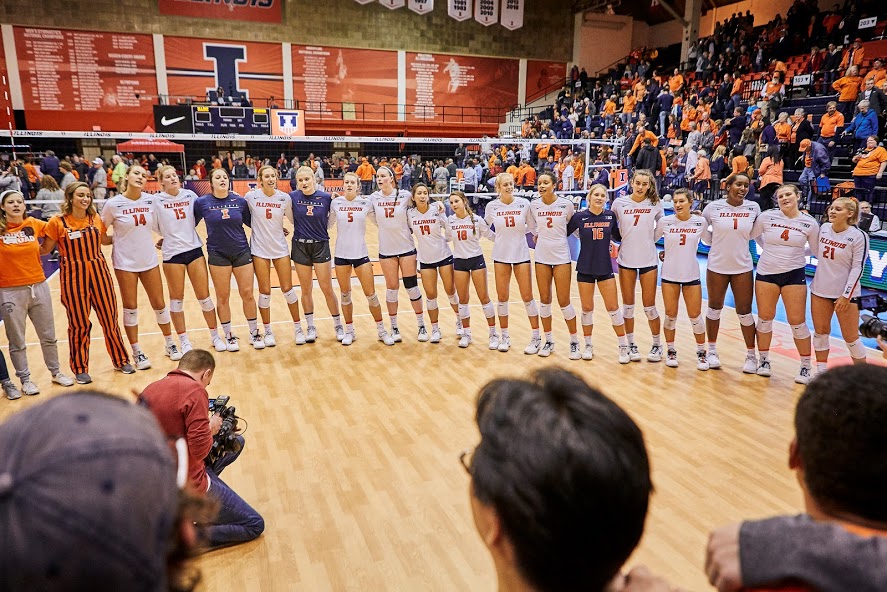 The Illini celebrate after defeating Indiana 3-0 on Saturday. The team will play Wisconsin, Minnesota, and Penn State this week.

The No. 17 Illinois volleyball team (9-6, 4-2) is halfway through its season, and over the next week, the team will travel to face three top-10 teams in six days.

Illinois will start the stretch off on Friday at No. 6 Wisconsin Badgers (10-4, 6-0), who’s most notable win came in sweeping the then-ranked No. 2, Nebraska Cornhuskers. Wisconsin is led both offensively and defensively by Dana Rettke. The 6-foot-8 middle blocker leads Wisconsin in kills and blocks this season with 192 and 57.0 respectively.

The team will then face the No. 7 ranked Minnesota (11-3, 5-1) for the second time this season. In the last match between the teams, Illinois dropped the game three sets to one. The team got off to a slow start by dropping the first set, and Minnesota’s defense stopped multiple comeback attempts by the Illini in the second and fourth sets to win.

In the last match of the three-match road trip, Illinois will face No. 8 Penn State (12-3, 5-1). Penn State’s most notable win came in its second match against No. 3 Pittsburgh, where the team won in five sets. The team has only lost one conference match, coming against Wisconsin in four sets.

Head coach Chris Tamas is proud of how many players have been able to contribute to the team. This season freshmen such as Kennedy Collins and Rylee Hinton have been big parts of the Illini. Diana Brown has also lead the team as the setter in her first season of play after her redshirt season last year.

Tamas talked about the preparation the team is taking to get ready for the tough stretch of matches in the next week and how it will help the Illini improve on their season.

“We know it’s apart of the Big Ten,” Tamas said. “We just take it one game at a time. Obviously we have to do prep work as needed, but we know we have to go on the road and play against these teams in their environments just as those teams have to come to us and play in ours … We just always look at it as an opportunity to get better, and the next opportunity for us is on Friday against Wisconsin.”