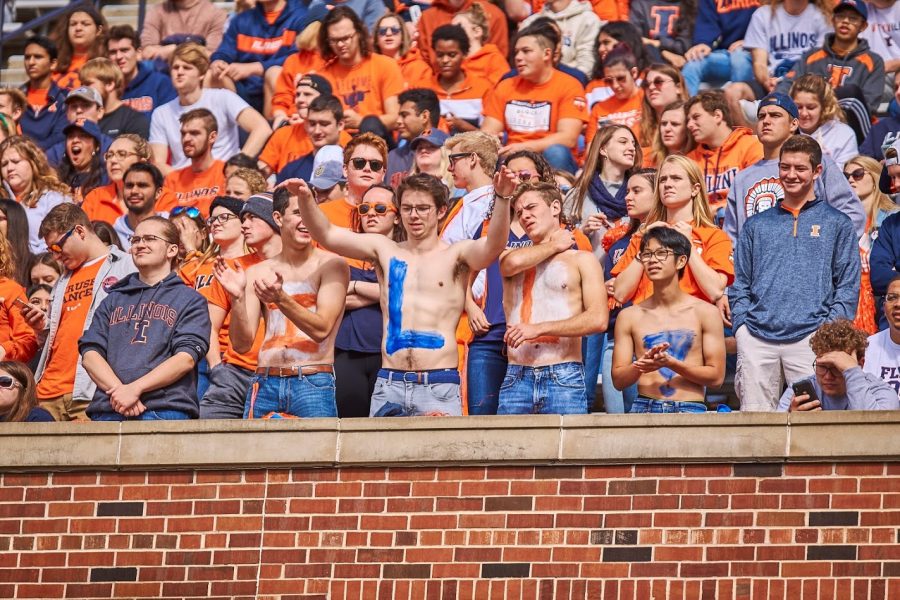 The Illini Student section cheering during the Illini’s game vs Wisconsin on Saturday.

A sea of orange and blue flooded the field at Memorial Stadium following Illinois’ upset over No. 6 Wisconsin Saturday during the Illini’s 109th Homecoming game.

The win not only broke Illinois’ four-game losing streak, but also handed the team it’s first conference win of the season and first Homecoming victory in five years. No. 6 Wisconsin is also the highest-ranked team Illinois has defeated since toppling No. 1 Ohio State in 2007.

Despite 50-something-degree temperatures at 9 a.m., 37,363 Illini and Badger fans filled Grange Grove for the teams’ 86th meeting. And although Illinois hasn’t won a Homecoming game since 2014 ─ when former head coach Tim Beckman and the Illini bested the Minnesota Gophers 28-24 ─ Saturday’s contest marks the 13th time overall and third time within the last five years Illinois has hosted Wisconsin on Homecoming.

Scoreboard and statistics aside, Illini fans, students and alumni had a lot to cheer about over Homecoming weekend 2019. The annual celebration is more than a day of football, it encapsulates the University’s rich history and plans for the future.

A Century in the Making

For thousands of Illini fans, Homecoming consists of tailgating in Grange Grove and watching Illinois and Wisconsin faceoff in the belly of Memorial Stadium. Spectators over the age of 21 can also enjoy ice-cold beer thanks to Illinois’ Department of Intercollegiate Athletics’ move to sell alcohol in the stadium this season following 2018’s record-low attendance.

The last thing fans might expect, however, is a history lesson.

According to historians, Illinois is among the first five schools to celebrate Homecoming. An article on Active.com cites Illinois, Baylor and Mizzou as the first universities to plan a “coming home” event.

And, according to an entry on fightingillini.com, “Baylor has documented proof of a formally named Homecoming celebration in 1909, but took a six-year hiatus before celebrating the second event at the school in 1915. Northern Illinois had alumni events beginning in 1906, but didn’t use the proper noun ‘Homecoming’ until 1911. Indiana University renamed their 1909 Gala Day to Homecoming on Nov. 5, 1910, and Michigan began inviting alumni back to campus in 1897, but the formal name began on the Ann Arbor campus in 1916.”

Homecoming at Illinois can be dated back all the way to its conception in 1909 when students C.F. Williams and W. Elmer Ekblaw combined the efforts of the Shield, Trident, and Phoenix honor societies to organize the inaugural event. The first official Illinois Homecoming was October 15, 1910, when the Illini beat Chicago 3-0.

Saturday’s 24-23 upset over No. 6-ranked Wisconsin was a stark contrast to Illinois’ 49-20 loss to then-No. 23 Wisconsin in 2018 and an even farther cry from the Badger’s last trek to Champaign on Homecoming 2017 when then-No. 5 Wisconsin toppled Illinois 24-10. The registered nearly 300 yards against the Illini in the same contest.

Illinois also moves to 21-18-3 against Wisconsin in Champaign. According to fightingillini.com, in 1995 Illinois’ 3-3 tie with Wisconsin was the final college football game to end in a tie, as the NCAA overtime rules were implemented the following year.