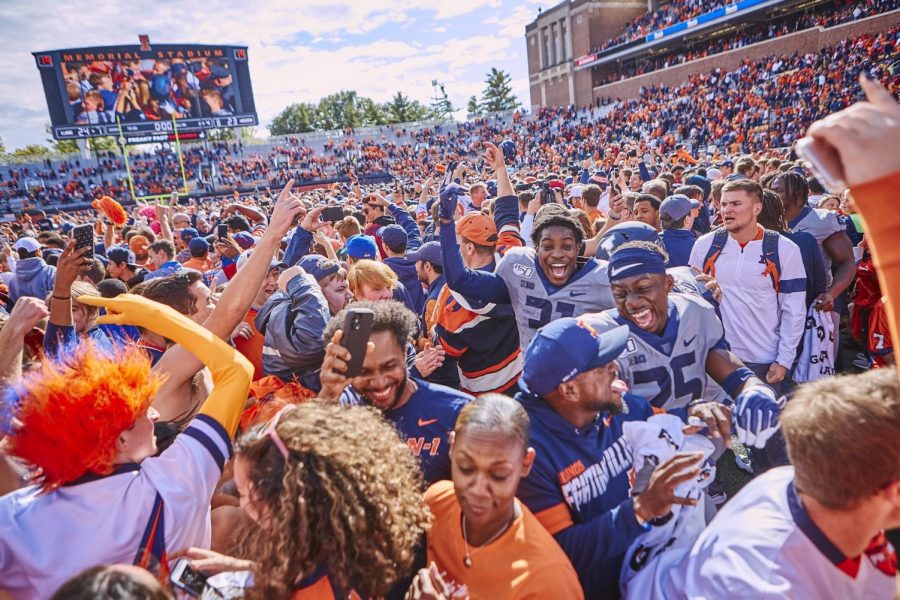 Illinois celebrates its win against Wisconsin on Saturday. Soon after the victory, spectators of the game rushed the field.

The Illini football team has come just short of winning more than a few times this season. Illinois was poised to uphold its domineering momentum or look like a team lacking just enough spark to secure a comeback. Game after game after game, so close, but yet so far.

But the Illini managed to finally pull off the miracle fans have been salivating for.

In their biggest win of the season, the Illini upset the No. 6-ranked Badgers at Memorial Stadium on Homecoming weekend.

“We’ve seen signs of what this football team can be, but we just haven’t been able to put it together for 60 minutes,” said head coach Lovie Smith. “James McCourt, to miss one early, but then to get another chance to kick for the game-winner is something you dream of.”

The Badgers wasted no time getting into the scoring column. In 11 plays, Wisconsin drove for 75 yards and converted on all three of their third-down attempts. The drive resulted in an 18-yard pass from quarterback Jack Coan to Jake Ferguson, with a field goal conversion putting them up 7-0.

The Illini had a chance to score after a sack from Oluwole Betiku resulted in a punt, putting the Illini at the Badgers’ 40-yard line. However, McCourt missed the field goal and the ball went back into Wisconsin hands with 3:13 left in the first.

For the remaining three minutes of the quarter, Wisconsin was paced by Johnathan Taylor, who advanced the team down the field to Illinois’ 32-yard line.

Sydney Brown and Dele Harding stopped Taylor and the Badgers’ drive at the 6-yard line, but Collin Larsh hit a field goal to extend their lead to double digits with just over 12 minutes in the second quarter.

After being injured on one of Illinois’ first drives of the afternoon, wide receiver Ricky Smalling was announced to be sidelined for the rest of the game with a knee brace. Shortly after, Betiku suffered an injury that sidelined him as well.

It’d be six minutes before the Illini broke out for their first touchdown of the afternoon. Brandon Peters rushed for 13 yards to the midfield, and a few plays later, Donny Navarro collapsed the Badger defense and ran for a 48-yard touchdown, cutting the lead to just a field goal with 5:53 left in the second.

The Illini almost took the lead before the half after a 73-yard rush from Josh Imatorbhebhe, but a penalty on the offense voided the touchdown scoring play. Larsh would later hit another field goal in the closing seconds of the half to extend their lead to a touchdown.

The Illini disrupted the Badger drive, but the Badgers were quick to respond with punishment of their own. The blitz continued to keep Peters out of rhythm while Imatorbhebhe was stripped of the ball at the Illini 15-yard line on their first possession. Two plays later, Taylor ran in 5 yards for a touchdown to extend the lead 20-7.

After nearly 10 minutes  of struggling to make any progress on their offensive possessions, the Illini found life at the end of the third quarter. First, a Peters-Daniel Barker connection went for 19 yards. Then, Peters rushed for 11 yards of his own for another first down, and finally, Reggie Corbin escaped the Badgers’ grasp to rush in for a 43-yard touchdown to close out the third quarter 20-14.

The Badgers opened up the fourth looking like they’d finish the Illini off. In 11 plays, the Badgers carried the ball 7 yards for a Larsh field goal, extending the lead back to 23-14. It would be the last time the Badgers scored in the afternoon.

With 10 minutes remaining, it was all Illini. First, Peters found Dre Brown, who powered through the defense to land a first at the 35-yard line. Then Peters lobbed a 29-yarder into the hands of Imatorbhebhe to bring the game to within 2 points.

The Badgers seemed like they were going to put out the spark for the Illini, but after pushing the ball all the way up to the 47-yard line, Tony Adams intercepted the pass from Coan and gave the Illini one last drive within the final three minutes.

In the last possession, Peters found Barker and Brown for consecutive first-down passes that put the Illini in field goal range.

Then, with four seconds remaining and the game on the line, McCourt delivered the knockout blow to cap off the upset with a 39-yard field goal.

With the win, the Illini broke their four-game losing streak and snapped the No. 6 ranked Badgers’ undefeated season. The win marks the highest-ranked opponent the Illini have beaten during the Lovie Smith tenure, their first win against a ranked opponent since 2007 and their first homecoming win since 2014 against Minnesota.

“It’s nothing like seeing a locker room celebrating after (winning) against one of the best teams in college football,” Smith said. “So we’re pumped up. We’ll celebrate this for a few hours, and then it’s on to Purdue.”