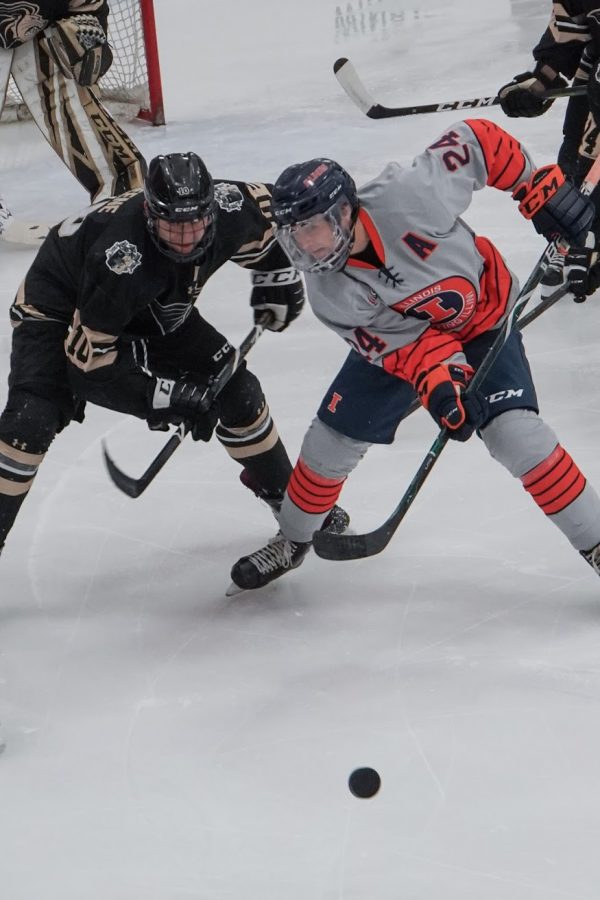 Bobby Ernsting (24) faces off with a Lindenwood defender on Friday at the Ice Arena.

After dropping their last two games to the No. 3-ranked Lindenwood Lions, the Illini look to start fresh and put an end to their recent skid at the Chicago Classic, a two-game weekend tournament played at Fifth Third Arena, the Chicago Blackhawks’ practice facility. But the tournament presents new challenges for Illinois. Three top-11 ranked opponents including Davenport University, the University of Nevada Las Vegas and Minot State will be at the Chicago Classic and could potentially play against Illinois.

During Illinois’ first game of the weekend, the team will take on the defending ACHA Division I champions, Minot State. Depending on the results of that game, Illinois will face either the winner or loser of the Davenport-UNLV game.

After starting the season ranked No. 1 in the country, Minot State has lived up to the preseason hype with a 4-0-2 start, outscoring opponents by an average of roughly three goals per game. For the Illini, the defending champs are a familiar foe.

“They’re one of our biggest rivals over the past five to six years,” said Illinois head coach Nick Fabbrini. “We knocked them out two years ago in the national semifinal, and they knocked us out last year in the first round.”

This Illinois team is fully equipped for an offensive shootout with Minot State. Prior to running into the buzzsaw of Lindenwood and its standout goalie Cooper Seedott, Illinois was getting off to wicked-fast starts offensively and was averaging 4.7 goals per game. During their two-game series at Central Oklahoma, the Illini scored a combined eight goals in the first period.

Even with a traditionally efficient offense, the defense has taken a step back in previous weeks, giving up an average of 5.25 goals per game, a recipe for disaster when taking on the Beavers. However, Fabbrini understands the importance of fine-tuning the defense during practice this week.

“A lot of time will be put into our defensive zone,” Fabbrini said. “A few cracks have developed, but we’re hoping that five days of practice will help.”

At this time, it’s unclear which goalie will be given the task of defending Minot State’s offense. So far, Fabbrini has used a goalie-by-committee system, with each of three goalies getting quality playing time.

Playing in Chicago is becoming a budding tradition for the Illinois hockey program, which started out as a single game six years ago and has transitioned into a mini four-team tournament where programs see a variety of different opponents. Fabbrini believes the mini in-state getaway is a fantastic way to prepare the team for the postseason.

After the Minot State game, regardless of the result, Illinois will have to turn around quickly with UNLV or Davenport on deck.

UNLV has been one of the most impressive teams in the ACHA this season, entering the weekend with an 11-1 record and a top ten ranking as of last week. The Runnin’ Rebels have been especially hot as of late, scoring at least seven goals in their last four games.

Davenport, while still having a decent season, hasn’t experienced the same amount of success as UNLV, entering the tournament with a 3-2 record. Davenport’s game Saturday will be its second contest in 20 days.

Despite the potential of facing Davenport and UNLV on the horizon, Minot State currently owns more real estate, according to Fabbrini.

“Right now, we don’t want to overlook Minot State,” Fabbrini said. “We will worry about Davenport and UNLV when we get to them.”