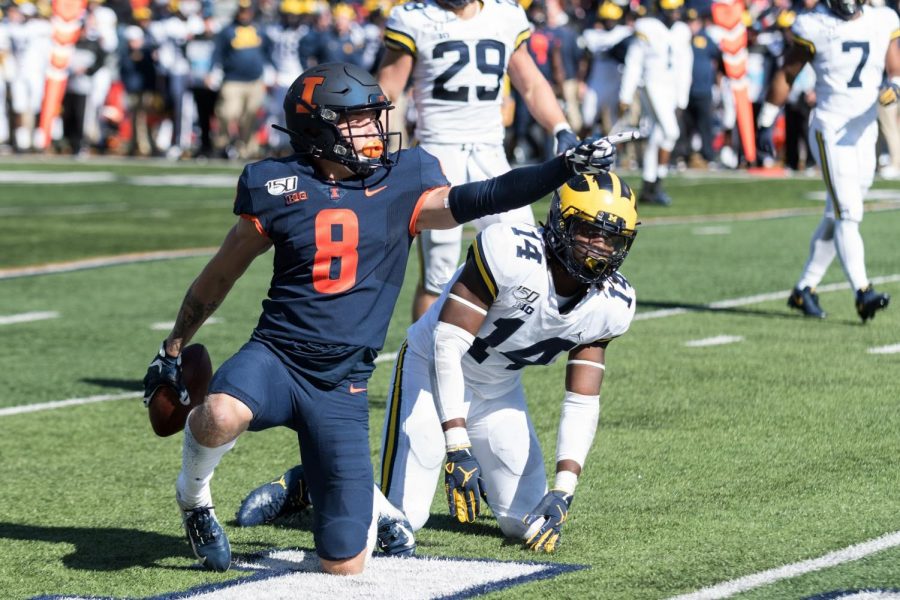 Freshman wide receiver Casey Washington celebrates a first down during Illinois’ game against Michigan on Oct. 12. Washington was a key contributor in Illinois’ upset over No. 6-ranked Wisconsin Saturday.

Losing starting wide receiver Ricky Smalling midway through Saturday’s game was a tough blow for Illinois, but the injury allowed the precocious freshman Casey Washington an opportunity to play meaningful reps in a big-time game, as Illinois went on to pull off a stunning 24-23 upset over undefeated, No. 6-ranked Wisconsin.

The Round Rock, Texas, native showcased his athleticism and big-play ability throughout fall camp and registered a critical 18-yard catch in the fourth quarter, helping continue the drive that ended in a 29-yard touchdown catch from Josh Imatorbhebhe.

Although Washington has mostly sat the bench behind Smalling, Imatorbhebhe and Trevon Sidney so far this season, his work ethic combined with injuries in the receiving corps has forced the coaching staff’s hand to put him on the field.

“(Washington’s) gotten better at it because he’s gotten more reps,” said offensive coordinator Rod Smith. “You see him make a catch like he did there at the end; he’s made a lot of those catches throughout fall camp. I trust Casey. We put the ball out in space (and) I know he’s gonna have a great shot at coming down with it.”

The catch on Saturday was Washington’s second of the season, both coming in the past two weeks against nationally-ranked opponents with strong defenses.

With such a young, unproven team, head coach Lovie Smith has made it clear opportunities will be available to those who show they deserve them, and Washington has demonstrated he’s one of those players.

“If you just hang in there you’ll eventually, if you deserve to play, you’ll get an opportunity,” Lovie said. “Casey Washington, of course, is one of those guys.”

Playing for a coaching staff that’s not only keen to educate players on how to play the game in practice but also willing to put them on the field when they’re ready is something Washington values at Illinois.

The Illini played one of the youngest rosters in the Football Bowl Subdivision a season ago and have shown a similar acumen this season.

“It feels great to play for these coaches,” Washington said. “These coaches, I don’t know if people realize, are one of a kind. You don’t get these coaches at other schools.”

Not only is the coaching staff putting young players like Washington in positions to be successful, but it’s also giving out feedback on where they can improve.

For Washington, it’s a matter of correcting the little things and staying consistent.

“I’ve said all along, I’ve been a Casey Washington fan,” Rod said. “The kid’s gonna be real good for us when it’s all said and done. I think he’s a pretty good player, now, for a freshman. He’s ahead of the curve in my opinion. It was just a matter of reps, (knowing) where he’s going, where he’s supposed to be (and) how to line up; that was his biggest crux, to be honest.”

While Washington possesses an enviable combination of size and speed, the freshman carries intangibles that go beyond physical traits.

On the sidelines of Illinois’ 31-34 loss to Eastern Michigan on Sept. 14, Washington could be seen looking visibly frustrated and audibly making his feelings known on the sidelines as the Illini offense was sputtering. Washington admits he’s an emotional player, but he wants to channel those strong feelings to fuel his play on the field rather than become a distraction on the sideline.

“Being a football player, I definitely connect all my emotions to the game,” Washington said. “When emotions are running high and the game’s flowing, it’s a different environment.”

Some may view an incident like Washington’s outburst as a sign of entitlement or arrogance, but Rod knows Washington’s attitude does not come from a place of selfishness.

Rather, the freshman is an extremely hard worker who just happens to be aware of the results a certain level of effort deserves.

“Casey’s not cocky, Casey’s confident, but Casey’s also probably one of the hardest working kids that we have in terms of coming to work every day, running these routes hard, doing what we try telling him to do in practice at 100% full speed all the time,” Rod said. “Casey don’t take any plays off, and that’s why I love the kid. He’s gonna make himself into a tremendous player.”

Washington is not one to shy away from showing off other sides of his personality either, as his bleach-dyed Odell Beckham Jr.-esque locks have garnered attention as well.

“He’s got a confidence level to him, in my opinion, he thinks he’s as good as anybody out there,” Rod said. “Hell, look at his hairstyle. Don’t that tell you something? I wish I could pull that off.”

And if Washington can someday replicate the highlight catches and incredible statistics of Beckham, no one will have a problem with his personality, regardless of how he chooses to express it.