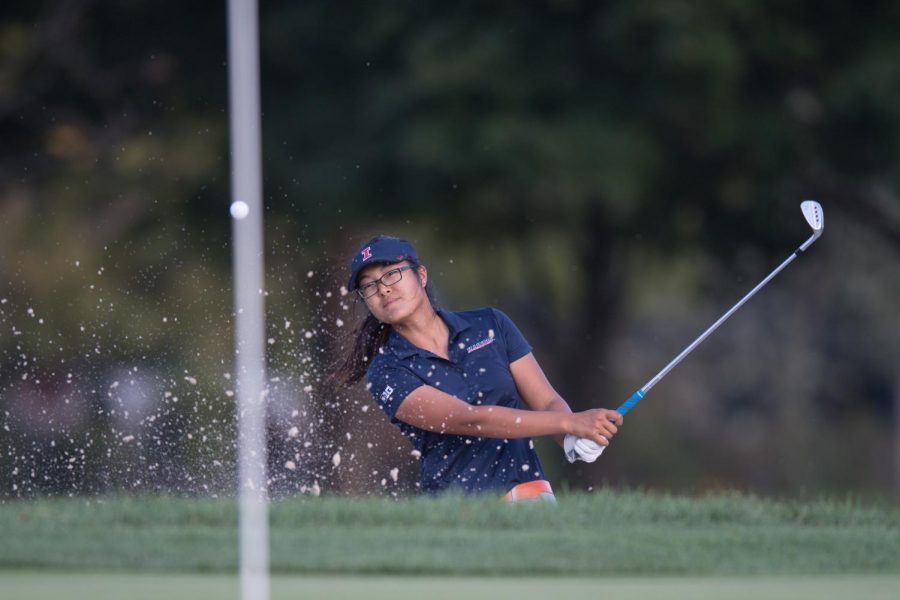 Sophomore Crystal Wang hits the ball at the Illini Women’s Invite at Medinah on Oct. 10, 2018. The Illini are headed to Wilmington, North Carolina, for the Landfall Tradition this weekend.

To close out their fall season, the Illinois women’s golf team will head to Wilmington, North Carolina this weekend to compete in the Landfall Tradition. The invite, which will be played Friday through Sunday, is hosted by the University of North Carolina Wilmington and will be played for the 18th time. South Carolina, last year’s runner-up, is the highest-returning team finisher from 2018 competing in this year’s tournament.

Having had no invite this past week, the Illini tried to put their downtime to good use by putting in extra work to prepare for their upcoming competition. Coach Renee Slone said the team took advantage of the off week the best they could, especially off the golf course.

“I think it was nice for the team also to kinda recharge the batteries, get a chance to focus on academics,” Slone said. “Kinda getting situated in order to finish off this fall season.”

Sophomore Crystal Wang and the team were still on the course refining their game.

“I think (coach Slone) gave us some good drills to work on, adjustments from last week, so I think those will boost our confidence and help us,” Wang said.

In their previous three invites, the Illini have competed against no more than 14 teams each weekend, but this invite will be different, since 18 total teams are competing in this year’s Landfall Tradition, including highly-ranked competition the Illini have and haven’t faced before. Despite knowing they have tough competition ahead, the women don’t let that affect them as they go into a big invite.

“We really try to focus on ourselves and not concern ourselves with what teams are in the field,” Slone said. “As long as we prepare ourselves well and take care of the things that are within our control, that’s all we can do and what happens after that happens, so we just want to make sure we take care of our business so we can put our best foot forward.”

Even though the Illini still have six matches before the postseason following this one, there is a break until the team begins playing in the spring. Each team has 24 days of competition allowed in a season, and due to time, weather and other factors, the season is split into two parts. Wang says since this is her last invite for a few months, she has a specific goal in mind.

“I wanna play well for Tristyn (Nowlin). It’s her last fall meet, and I want to play well for the team, and especially for her,” Wang said.

In last year’s invite, Duke took home the team championship, with South Carolina placing second and Arkansas, Virginia and Michigan rounding out the top 5. Duke and Arkansas will not be returning this year. The Illini didn’t compete in Wilmington in 2018, so this will be their first look at the course.

After this weekend, the Illini will not compete again until Feb. 2 in Orlando, Florida, for the UCF Challenge.