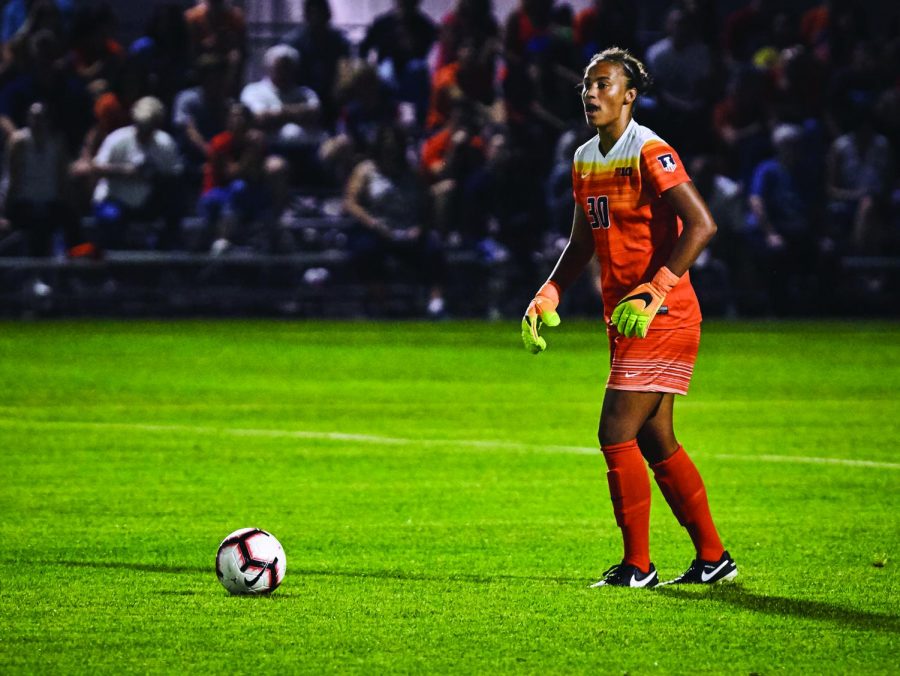 ºSome athletes have pregame superstitions. Placing gear the same way or listening to the same playlist before a game can help players prepare for a game.

And while Illinois soccer players have their own routines before games, the team comes together with music.

Senior forward Kelly Maday has no set ritual but likes to listen to music before games, both individually and with the team. However. sophomore midfielder Katelynn Buescher braids Maday’s hair before games as well.

“One day, I was in the locker room and I was trying to braid my hair by myself,” Maday said. “And it was not looking very good and (Buescher) came over to me and offered to braid my hair and ever since, she’s kind of done it, I love the way it looks.”

Buescher runs a pseudo-salon before games while she’s in the training room. She started braiding Maday’s hair, but Buescher’s business has picked up from there.

“I started braiding my own hair,” Buescher said. “And then in the training room, people just started sitting in the chairs and where I sit became the little salon, and now I braid people’s hair.”

Currently, Buescher braids her own hair, Maday’s hair, junior midfielder Maggie Hillman’s hair, and occasionally other teammates who ask her to braid their hair.

But like Maday, senior goalie Jaelyn Cunningham doesn’t have a set ritual. She enjoys the locker room environment created by junior goalie Elizabeth Cablk and her AUX cord.

Cunningham said Cablk puts on a variety of songs before the game, ranging from current songs to 2000’s throwback jams. Cunningham also enjoys Post Malone, and Cablk will often include his music.

“She does like to rock Post Malone,” Cunningham said. “‘Candy Paint’ (is) my personal favorite, so shout-out to Cablk, and his new stuff isn’t that bad.”

Cablk gets to the game early and runs the AUX cord. Maday said Cablk running the AUX has been an asset to the team.

“It went from some chill music to pumping us up really quickly,” Maday said. “It’s definitely gotten our energy to where it needs to be before warm-ups.”

“It’s kind of what I feel like spoke to me that day,” Silber said. “I usually put tape on my wrist and write why I play and who I play for. The scripture’s become more of a thing, just (because) I think that that’s mostly why I play. I’m a Christian so just kind of giving all that glory back to God.”

While the athletes have their own individual routines, the team still coalesces around the AUX cord.

“We all have kind of our own routines,” Buescher said. “Once we’re done with our routine, we start kind of getting hyped up with the team to Elizabeth’s music. So we do our own individual stuff and then we… get into the team.”