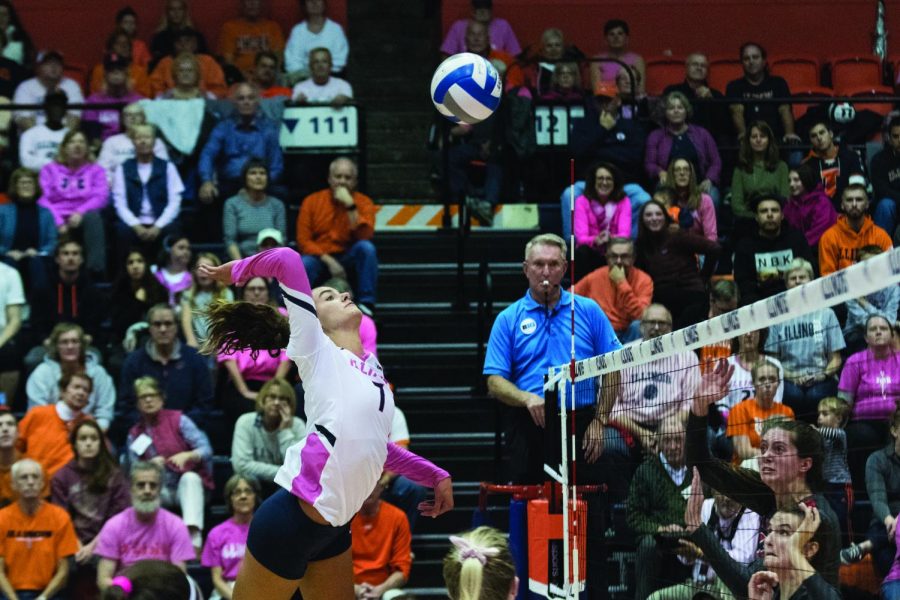 Senior Jacqueline Quade jumps to the net in Huff Hall on Saturday. Quade led the Illini with 13 kills, helping the team defeat the Buckeyes 3-0.

After three consecutive losses on the road, the No. 17 Illinois volleyball team returned to Huff Hall on Saturday to host Ohio State. The Illini (10-9, 5-5) swept the Buckeyes (11-11, 4-6), winning their first match in two weeks.

“It’s good to be back home,” said head coach Chris Tamas. “That’s about as grueling of a road trip you’ll get both opponent-wise and how the travel ended up working out, late nights and early mornings. Proud of the way we fought through and able to come out today, not using that as an excuse, but I thought we played really well.”

“Sometimes being off reminds you how much you love something,” Prince said. “Not that I wanted to be hurt, but it definitely gives you more perspective. Being a fifth-year and knowing this is my last go-around makes me appreciate it a little more, putting on the jersey again, pulling up the knee pads.”

In their last three matches, the Illini averaged just over 30 attacking errors but only had 15 against the Buckeyes. Illinois hit .236 on Saturday, making it the team’s best kill percentage since Oct. 12 against Indiana.

While Illinois struggled to put together a win on the road, Prince said the team has been learning from each match and translated those lessons into a win on Saturday.

“We get in the gym every day, and our staff is hard on us, but loving,” Prince said. “They push us to be better every day. That was a tough road swing with really, really good teams, so I thought we could come out of all those matches and learn something about ourselves and go back in the gym the next day and make those changes.”

One of those improvements was starting strong right out of the gates. Illinois won the first three points of the match and never let Ohio State take the lead in the first set. While the Buckeyes tied it up three times in the first set, consecutive kills from Megan Cooney and Kennedy Collins ended the first set.

Illinois got out to another big jump in the second set, leading Ohio State 16-10, but gave up 7 unanswered points and the lead. The teams traded points up until the last 2 with a kill from sophomore Mica Allison and an attack error from the Buckeyes.

Illinois locked in on the third set, hitting a match-high .351 with 17 kills. While Ohio State held the early lead, Illinois went on two 4-0 runs near the middle of the set to pull away. The Illini ended the match with a kill from Quade followed by an Ohio State receiving error.

“We’re looking forward to getting back in the gym Monday,” Tamas said. “We’re halfway through the Big Ten season. We’ll be looking at a lot of numbers and get to see where we need to go from there.”