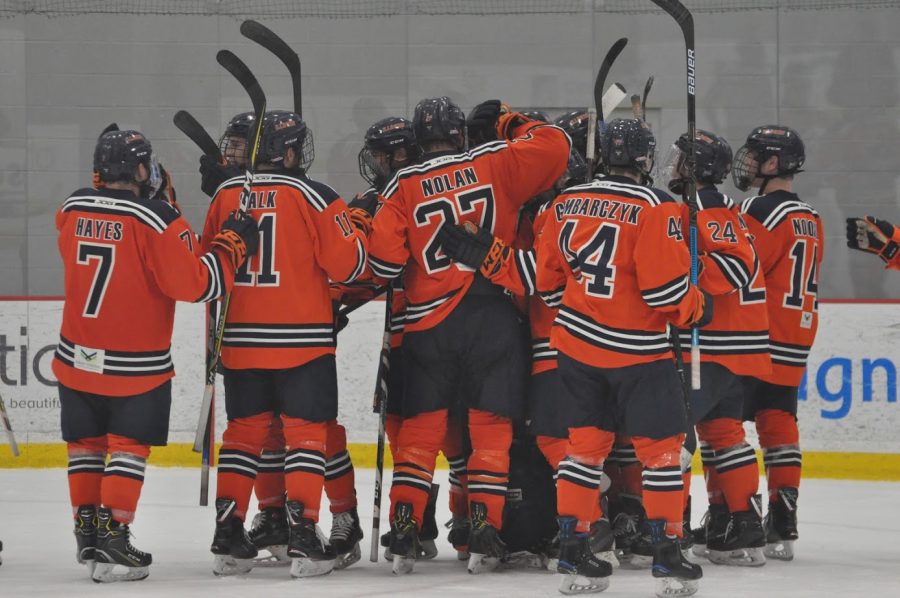 The Illini Hockey team gathers after defeating UNLV 4-1 on Sunday at the Fifth Third Arena.

The Illini weren’t flying high into the Chicago Classic after losing four out of their last five games and registering losses to several of the top club hockey programs in the nation. Despite dropping the first game of the tournament to No. 3-ranked Minot State, Illinois bounced back in the finale of the tournament with a convincing win over the high-scoring University of Las Vegas Nevada Runnin’ Rebels.

On Saturday evening Illinois finished its first period with strong statistics against Minot State. Illinois outshot Minot State 10-9 and held the Beavers scoreless for the majority of the period. But after failing to convert offense opportunities and committing penalties, Minot State cracked the scoreboard first on a power play with 5:41 left to give them a 1-0 lead. With the Illini on their heels, the Beavers were able to quickly strike again at 1:41. After the first 20 minutes, the Illini had dug themselves into a 2-0 deficit.

The second period of play was smoother for the Illini after they committed one penalty and held the Beavers scoreless. The defensive stalemate lasted for over 19 minutes, until the Illini took advantage of a short-handed Beavers lineup, scoring on a Jack Healy power-play goal with 43 seconds left. All of a sudden, the Illini had life and trailed 2-1 with a period left.

Although right away in the third period the Beavers took over the control and momentum of the game, scoring on a Justin Metcalf goal with 15:43 left to extend the Beaver’s lead to 3-1.

The Illini had a chance to respond quickly and trim the lead down to a single point on another powerplay, but the Beavers’ goalie Joshua Bykowski came up clutch, keeping the lead at two. After the missed opportunity, the Beavers put the dagger in the Illini’s upset bid, scoring another goal with 7:43 left. Once the final buzzer went off, the Beavers pulled away with a 4-1 victory.

“They played a strong, consistent game,” Illinois head coach Fabbrini said. “We had some good flashes of play, but overall it was not a very strong effort on our part.”

The Illini had no time to mourn their loss, however, with the UNLV Rebels on Sunday afternoon. UNLV fell to Davenport on Saturday night 3-1.

The Illini defense came to play in the early parts of the game, shutting out the high-scoring Runnin’ Rebels during the first period. The offense, which started off slow, finally hit its stride late in the period with a little help from UNLV, scoring on a Nick Chirillo power-play goal to take the 1-0 lead. For the first time since their losing streak started, the Illini were ahead after the first 20 minutes.

Behind Jack Healy and Thomas Kolaz’s goals, respectively, and outstanding goalie play from Jake Barnhart, who got the start Sunday in favor of Saturday’s starter, Elliot Gerth, the second period was even stronger for Illinois. The Illini took a commanding 3-0 lead into the final period of regulation. Despite Barnhart having a better statistical game than Gerth’s Saturday performance, Fabbrini didn’t think the switch was the main difference.

After playing catchup, UNLV cracked the Barnhart code, scoring with 5:31 left and trimming the lead to 3-1. In an attempt to send the game into overtime, Illini forward Jon Moskaluk broke away from the defense and scored an empty-netter with 20 seconds left putting the Illini on top for good with a 4-1 lead. The tail end of the game made Fabbrini proud.

“We played really tough teams of late,” Fabbrini said. “I’m glad we are becoming back to the way I know we can play. We need to build off of that next weekend.”

After the brief in-state getaway, Illinois heads back to the Big Pond this weekend with Maryville University on deck for a two-game tuneup series.