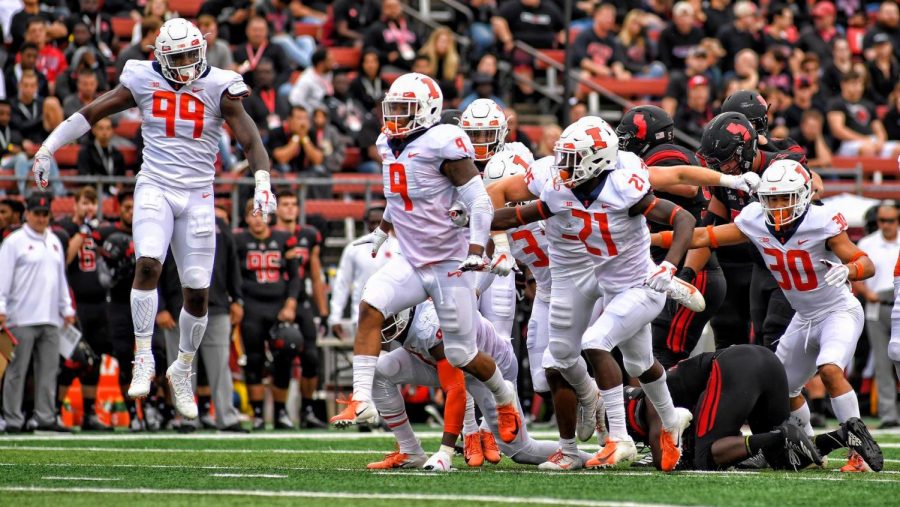 The Illini football team celebrates after a fourth down at High Point Solutions Stadium in New Jersey on Oct. 6, 2018. Illinois won 38-17, coming out of a two-game losing streak and are playing Rutgers this Saturday.

Illinois is currently riding the first Big Ten winning streak of the Lovie Smith era and has an opportunity to extend its streak run hosting Rutgers on Saturday. The coaching staff views the entire season from the perspective of a single football game, and the Illini are riding winning momentum as the second half of the fall season kicks off. A big part of Illinois’ resurgence can be credited to the newly opened Henry Dale and Betty Smith Football Center, a world-class facility.

Throughout the first six games of the season, the Illini sat at 2-4 and appeared to be trending downward. But an upset victory over No. 6 Wisconsin turned the tide. Illinois then downed Purdue 24-6 in West Lafayette, Indiana, last Saturday to pull to an even 4-4 record on the season so far.

Illinois couldn’t put together a consistent performance on both sides of the football during the first half of the season, often stalling on offense while the defense kept the game alive, only to let opponents take advantage of an overworked defense once the offense got going.

As head coach Lovie Smith framed it, the season is represented by one football game, and through halftime, or six games, Illinois fell behind. But the team is starting to build momentum as it enters the second half.

“I’ll just to try make the comparison (with) a football game. If you’re behind at the half, what has been decided? Nothing really,” Smith said.  “It’s how you perform that second half of the game, and it’s how you perform the second half of the season. Our players buy into that. It also helps when you come out in the third quarter and you play well right away. It gets the momentum going, and that’s where we are.”

The most notable change for Illinois has been the play of the defense, which held a bigger, more talented Wisconsin team to only 23 points. The defense also snuffed Purdue, albeit in less-than-ideal weather with the Boilermakers down two key players.

For a unit featuring several upperclassmen who have been through tough times over the past three seasons, the turnaround is one Smith is happy to see come to fruition.

“We did invest an awful lot in young players because we were in a position where our program said we needed to do that,” Smith said. “We knew then that we were gonna take some lumps, but those guys were gonna get better each year, that’s what’s happened. They’re not seniors, but they’re older and we should get better play from them, and we are. As we started the season, one thing I talked about that I was excited about (was) those young players (who) now control the locker room.”

Any person who spent time around the program before the 2019 season knew the facilities were far from ideal. The team’s locker room was reminiscent of a high school’s, and a facility for the team to spend time preparing away from the stadium, something many top programs in the nation enjoy, didn’t exist.

But all of that changed with the opening of the Henry Dale and Betty Smith Football Center, a short distance away from Memorial Stadium on Fourth Street.

Equipped with an updated locker room, positional meeting rooms and a new lounge area, the facility has contributed to the Illini’s spike in performance this season, according to the coaching staff.

“Absolutely it helps,” said offensive coordinator Rod Smith. “It’s remarkable. Kids actually want to be there, they want to hang out there, fellowship together. It’s a great building, a great structure for us, and to me, it’s gonna be great for the future as well, and that’s one of the pieces that’s help mold this thing together so far.”

The amenities of the facility causes the players to spend more time together, which has only strengthened their chemistry.

But Lovie feels the players are doing more to prepare after being blessed with new and improved equipment across the board.

“Everything that’s happening is playing a part in us getting better, seeing signs moving in the right direction,” Lovie said. “The Smith Center, of course, is a big part of that. It’s a new day. Expectations, of course, were raised once we moved into it, and I think just for the players to come to work every day, and come get into the building every day in a place like that makes (them) put (their) best foot forward.”

Since joining the Big Ten, Rutgers hasn’t seen too much success. The Scarlet Knights haven’t won a conference game since 2017, the season in which they made their last visit to Champaign and emerged victoriously.

Viewed by critics as an avenue to reach the New York television market and establish a conference football recruiting base in a talent-rich state, Rutgers’ addition to the conference in 2014 has delivered those results so far in five years.

The Illini will be rare favorites in a conference matchup Saturday, and Lovie is hoping the positive momentum the program is building will carry it into a status where being favored is the norm.