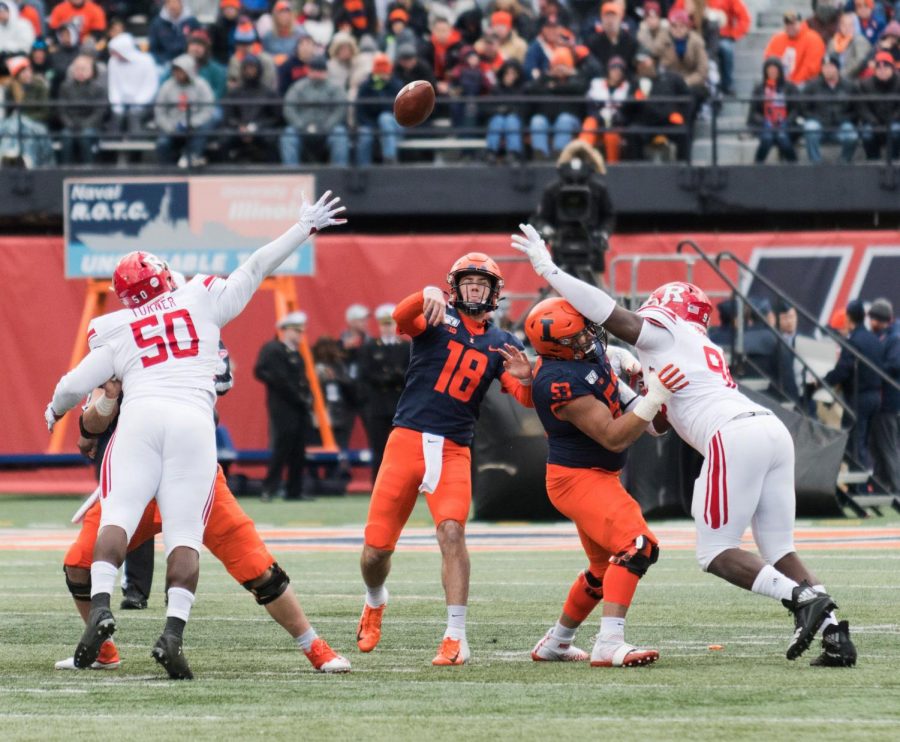 llinois quarterback Brandon Peters launches a pass during the game against Rutgers. The Illini were tied 10-10 at halftime, but bested the Scarlet Knights 38-10. Jonathan Bonaguro The Daily Illini.

After a first half that had seen the Scarlet Knights and Illini going back-and-forth with a tie game, the Illini football team blew Rutgers out of the water off the strength of a dominant third-quarter run.

Illinois took initiative on offense early in the first period. After two stagnant first exchanges between the Illini and Scarlet Knights, transfer quarterback Brandon Peters and the Illini found life by way of a 48-yard pass over the heads of the defense and into the hands of walk-on sophomore receiver Donny Navarro who was stopped just short of Rutgers’ red zone by Christian Izien.

Senior running back Dre Brown finished off the 8-play, 78-yard drive with a rush into the end zone to take the first lead of the game, capped off with a field goal from kicker James McCourt to go up 7-0 with 8:38 left in the first quarter.

Following a third consecutive drive without a first down, the Illini extended their lead with an 11-play, 56-yard drive. What would have been another touchdown, this time off of a pass to Josh Imatorbhebhe, was ruled incomplete, and after another failed throw to Daniel Barker, the Illini settled for another James McCourt field foal from 25 yards out.

Rutgers responded right away in the second period on their first drive, with an 11-play, 75-yard advance into a touchdown. The Illini almost stopped the drive after a hard sack on Johnny Langan by Jamal Milan, but in the subsequent play, he found Mohamed Jabbie for a 31-yard pass into the endzone to cut the lead to just a field goal.

The Illini continued to try overpowering the Scarlet Knights’ defensive line, but was held to three-yards-per-play in the first half and struggled to get much going in the passing game after the dime to Navarro. Peters was also sacked in two consecutive third-and-outs for the Illini, while Rutgers closed in the half with a 25-yard field goal from Justin Davidovicz, tying the game to close out the half.

Illinois’ offense struggled to get back into a rhythm starting the second half but broke their cold streak by way of a 54-yard carry by Peters all the way to Rutgers’ 2-yard line. Brown finished off the sequence with a touchdown in the following play, putting the Illini back up 17-10.

In the next possession, Johnny Langan dodged a sack from Stanley Green but had the football knocked out by Isaiah Gay. Nate Hobbs recovered the fumble, and a 36-yard run turned into another Illini touchdown, extending the lead again to 24-10.

In the next possession, Peters connected on a 52-yard bomb to Josh Imatorbhebhe for their third touchdown to cap off the quarter, effectively blowing the once tied game wide open to the tune of a three-touchdown lead, 31-10.

The Illini added more insult to injury, opening up the fourth with another touchdown coming off of a 55-yard pick-six by Dele Harding to extend the lead to 38-10, capping off their second-half run with 28-unanswered points and sitting on cruise control to defeat Rutgers 38-10.