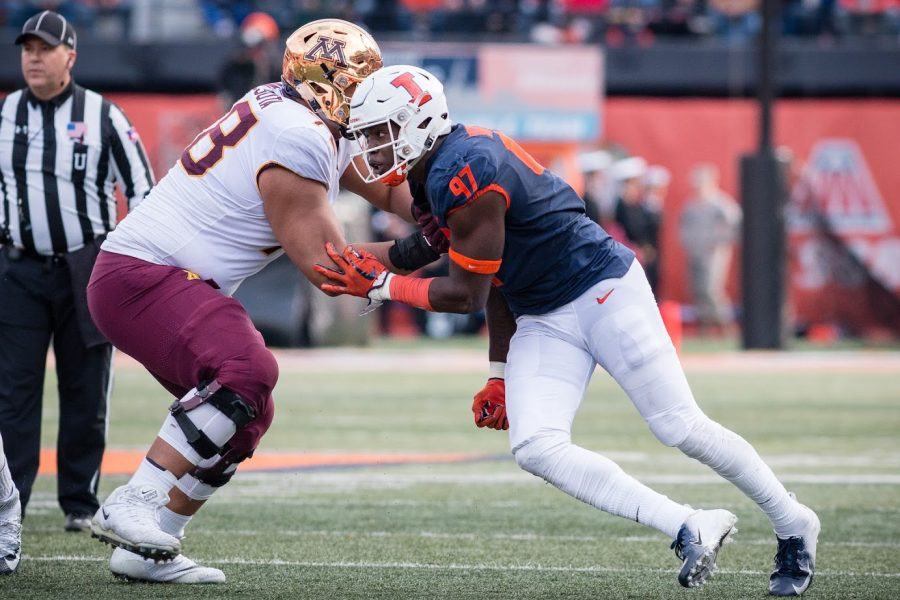 Illinois defensive lineman Bobby Roundtree tries to break through the line during the game against Minnesota at Memorial Stadium on Nov. 3, 2018.

Illinois Athletics and head football coach Lovie Smith launched a fundraising campaign for defensive end Bobby Roundtree, who suffered a major spinal cord injury in a swimming accident in his home state of Florida this summer.

The GoFundMe for the star defensive lineman is called “#97Strong: Fight for Bobby Roundtree,” with a goal to raise $97,000. In connection to his jersey number, 97, the money will go toward assisting Roundtree and his family in paying for services and treatments that go beyond insurance coverage.

Those outside services include physical therapy, occupational therapy, a specialized diet, nutritional support, transportation and housing assistance, according to fightingillini.com. All of these would add up to an annual bill near six figures.

“Bobby is family,” Smith said via fightingillini.com. “We are going to do everything in our power to give Bobby the best chance to succeed, and we’ll be with him every step of the way. He has a locker room full of brothers who remember what Bobby did for this football team, but they also know what a special young man he is. Bobby has made an everlasting impact on MaryAnne and on me, and we intend to support him as he confronts these new challenges. We hope others will join us.”

After receiving treatment in the Shirley Ryan AbilityLab for the last few months, Roundtree will soon be moved to an outpatient rehabilitation center for the next step in his recovery process and plans to be back as a full-time student in January.