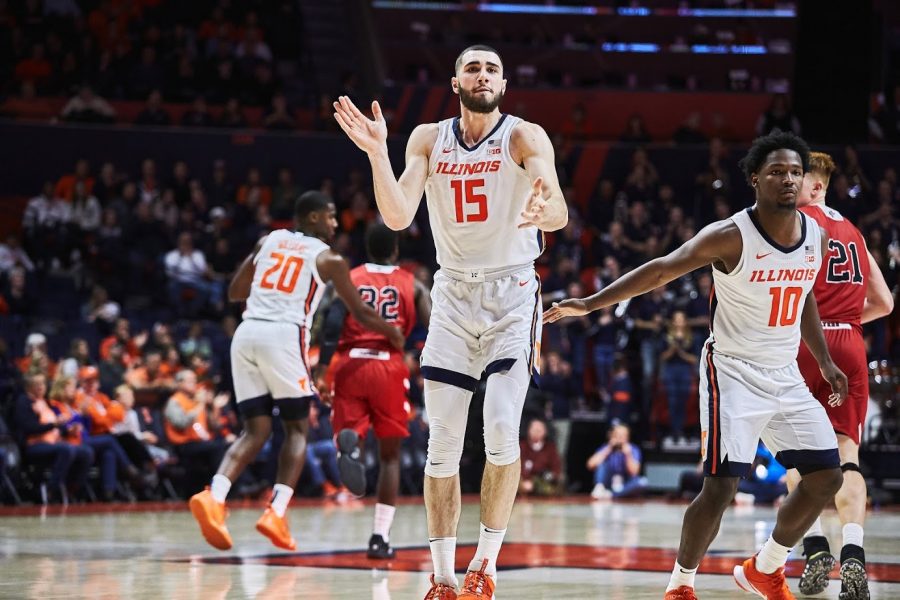 Giorgi Bezhanishvili (15) celebrates after the Illini score at State Farm Center on Friday. Despite a slow start against Lewis in Friday’s exhibition, Illinois pulled through with 83-50 win.

After a slow start to last Friday’s exhibition game against Lewis, Illinois showed flashes of how the rest of the season could look in a 33-point blowout win. The Illini officially begin their season on Tuesday when they host the Nicholls State Colonels.

A member of the Southland Conference, Nicholls State went 14-17 last season and finished 10th in their conference, while the Illini finished 12th in the Big Ten with a 12-21 record.

Freshman center Kofi Cockburn made quite the debut in State Farm Center against Lewis, leading the Illini with 16 points and 11 rebounds.

Tuesday’s matchup should bring even more action for Cockburn, who stands at 7 feet tall, as Nicholls State will bring some height to even it out. Forward Elvis Harvey Jr. is listed as 6-foot-9 and averaged 6.5 points and 4.8 rebounds for the Colonels last season.

Dosunmu led with four assists, but Illinois will need to see a bigger spark from him on Tuesday, since high expectations for the sophomore and the team are looming.

Freshman Benjamin Bosmans-Verdonk should also be expected to contribute even more after a strong performance in the second half against Lewis. Verdonk scored 11 points in just eight minutes of play, going 3-for-3 from the 3-point line.

While they had strong flashes of a highly improved team, the Illini will look to put together a complete performance against the Colonels before hitting the road to play Grand Canyon on Friday and No. 21 Arizona on Sunday.

Illinois and Nicholls State will tip off at State Farm Center at 7 p.m. on Tuesday.