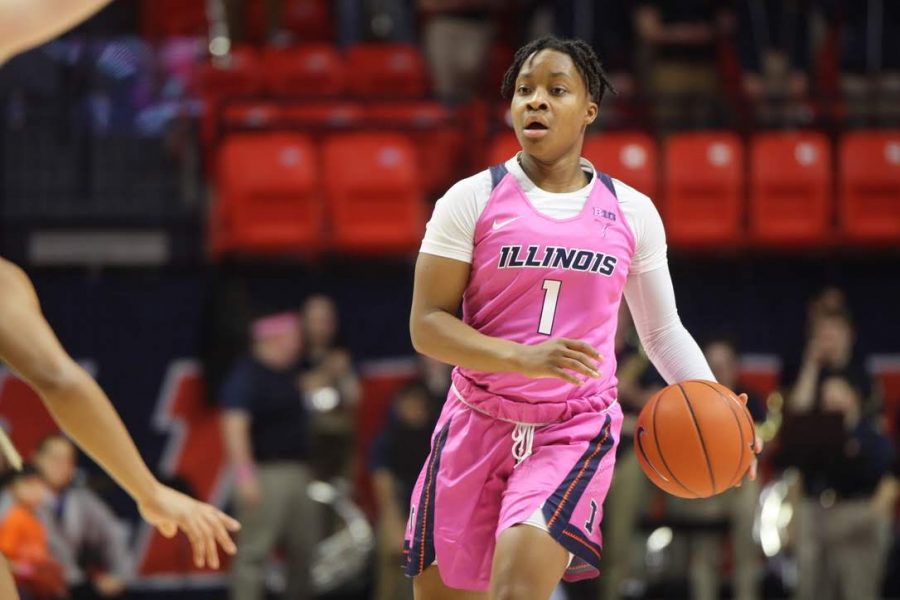 Brandi Beasley runs up the court at State Farm Center on Feb. 17. The women’s basketball team will open their season on Tuesday, hosting Chicago State.

The Illinois women’s basketball team kicks off its 2019-20 season at home Tuesday, hosting Chicago State at State Farm Center. The 2019-2020 season marks head coach Nancy Fahey’s third season at the helm of the program, along with the return of one of last season’s leading scorers, senior guard Brandi Beasley.

The team ended last season with a 10-20 record overall and a 2-16 conference record, with the only conference wins coming against Minnesota and Wisconsin.

But the Illini have lost their number one scorer, Alex Wittinger, who graduated last spring.  Wittinger scored 14.7 points per game last season, accounting for just over a fifth of the Illini’s offense. She was also a force on defense, averaging 1.2 steals a game and 2.5 blocks a game.

The Illini come into a new season with a considerable amount of experience at their disposal. Six seniors — Beasley, redshirt guards Cierra Rice and Petra Holešínská, guard Courtney Joens, forward Ali Andrews and graduate guard Taylor Edwards — bring with them a combined total of 346 starts while in the Orange and Blue.

All eyes will be on Beasley, who enters her final season as an Illini after a junior year highlighted by team and conference accolades. The 5-foot-6-inch guard became the 30th Illini to reach the millennium mark in January, reaching 1,000 points on the road at Michigan State. Beasley also led Illinois in steals with 39 overall and finished the season fourth in the Big Ten on assists.

The team will also get back some of the shooting missing last season, with the return of Holešínská, who was out all of last year after tearing her right ACL in the preseason. Her freshman year, she scored 10.5 points a game on 35.5% from three.