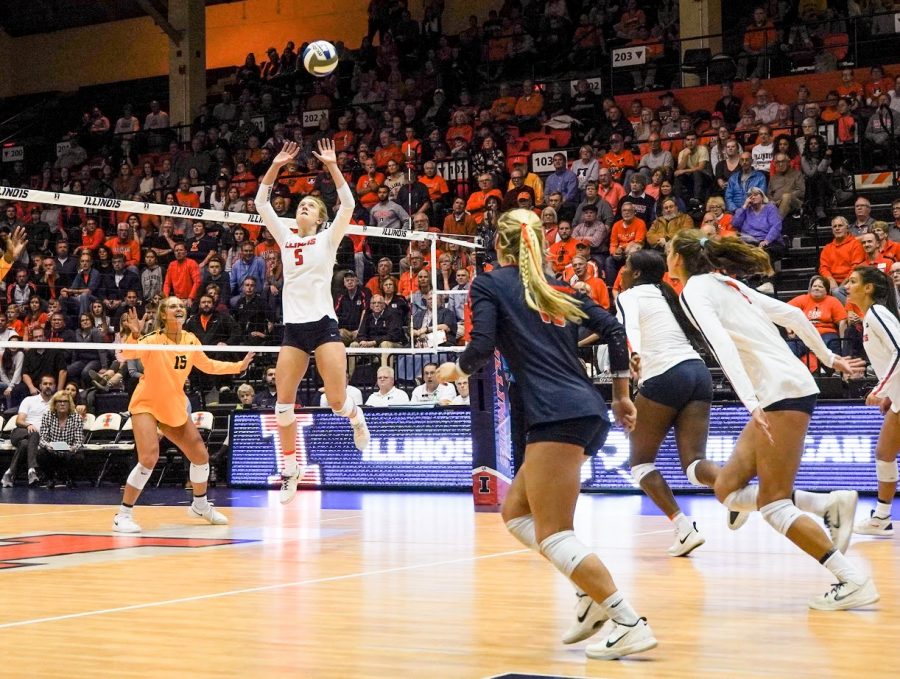 Diana Brown sets the ball to outside hitter Jacqueline Quade during Illinois’ game against Michigan at Huff Hall on Friday. The Illini fell to the Wolverines in four sets.

The team was also able to produce only three blocks over four sets, which is out of the ordinary for a team with defensive presences like middle blockers senior Ashlyn Fleming and freshman Kennedy Collins.

“Our defense wasn’t great either in the first or second set,” said head coach Chris Tamas. “You know (Michigan’s) a nice team. Senior leadership in their setter and they have some players that have been in the conference for a handful of years, so do we. We got to make sure we be aggressive from the get-go … I just didn’t think we made good choices out there.”

After the loss to Michigan, the team had less than 24 hours to turn around and compete. When asked about what he would tell the team to get them ready for the quick turnaround, Tamas said, “You better show up.”

“We were also serving really well,” Fleming said. “And that just makes blocking so much easier, because then the block can have easier reads. And then our defense was picking up everything, we were super scrappy and kind of going (all out).”

Aggressive serving has been something Tamas made a focal point for this Illini team. Against the Spartans, the Illini had four aces with only six errors. In comparison, Michigan State didn’t have any aces on the match but had one service error.

Tamas talked about how important serving was to Illinois’ game plan against Michigan State.

“Our scout tonight was just to be really good at reading the game,” Tamas said. “I thought we did a tremendous job at that. It got set up with the serve, and able to push opponents off the net is a big deal, and able to set up a solid block and force them to a lot of shots they didn’t want to hit tonight.”

The Illini will see if they can build off of this victory and turn around from their latest stretch of games, where they have been only 2-4. The team will head to Iowa City to take on Iowa (9-14, 3-9), a team Illinois has already beat this season in three sets.