Illinois inches past Nicholls State in overtime during regular-season opener 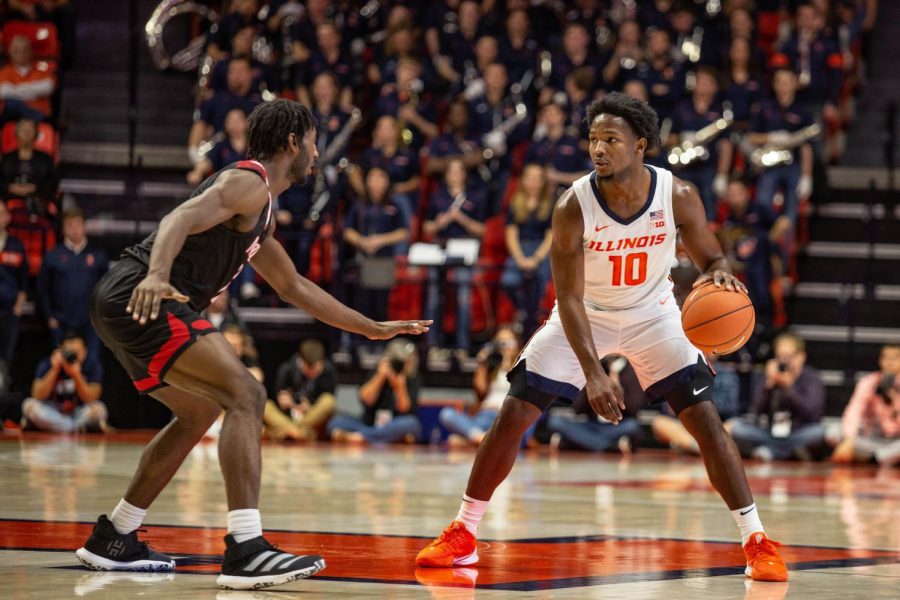 Senior guard Andrés Feliz dribbles in front of Nicholls State's defense during the team's home regular-season opener. The Illini beat the Colonels 78-70 in overtime at the State Farm Center on Nov. 4. Ben Tschetter, The Daily Illini.

“We got the win, that’s all that matters,” said sophomore guard Ayo Dosunmu. “We don’t come out here and play to try and win by 20, 25, 30. We come out, play for ourselves and get the W. We’re not worried about how we went to overtime. That’s a good team. Nicholls State is a great team, they played the game the right way, and they have shot-makers.”

The Illini held the lead until the last 1:24 seconds of regulation after the Colonels went on a 16-2 run to force a 66-66 tie. Nicholls State forced Illinois into a near 5-minute scoring drought before junior Trent Frazier hit a pair of free throws to prevent the loss.

Head coach Brad Underwood was impressed with his team’s fight in the first half, forcing nine turnovers and out-rebounding the Colonels 30-10. However, he called the team’s second-half defense “disappointing.”

“Our first-half (defensive rating) was as low as we’ve ever had of any team here, and yet you can’t allow a team to go on a 16-0 run with five minutes to go,” Underwood said. “I am really disappointed we didn’t get on the floor for loose balls. We got completely outplayed, and Nicholls deserves all the credit for that.”

Feliz put the Illini on his back Tuesday night, scoring 28 points, 21 of those coming after the first half. He was also a force on the glass, registering a double-double with 11 rebounds.

The senior was usually the first man off the bench last season, but Feliz earned his fifth career start on Tuesday night. Feliz had just one double-double last season.

“I call (Feliz) a little pitbull,” Frazier said. “He’s tough. For a guy like that, he’s one of the guys we trust on this team with the ball in his hand late shot clock. He makes the right play. He’s not selfish and gets after it on defense. Dre’s been one of our go-to guys on this team, he’s been phenomenal for this team.”

After a 5-point outing in the exhibition game, freshman guard Ayo Dosunmu came alive with 21 points and added 7 rebounds. Freshman Kofi Cockburn was another bright spot for Illinois, also earning a double-double with 10 points and 11 rebounds.

While Frazier only scored 4 points, the junior was locked in on the defensive end, drawing three charges and forcing a travel near the end of overtime to seal the win.

“Being a veteran, the ball wasn’t going in so I had to figure out other things to do like helping out on rebounding,” Frazier said. “Just mentally locking in on the defensive end, getting stops and helping my team win. I could’ve easily got in my own feelings and let those shots bother me, but I didn’t.”

Both offenses were ignited in the second half, but neither team found any flow in the first half with Illinois shooting 39% with 11 turnovers. Nicholls State shot 30% and had nine turnovers.

Despite early struggles, Illinois held the lead throughout the entire first half. The Illini used a 9-0 run through seven minutes to keep the Colonels at a distance.

While they dominated on the glass in the first half, the Illini were only up 30-19 heading into the second half. Cockburn, Feliz and sophomore guard Alan Griffin all led Illinois with seven points at the half.

The Illini came out stronger in the second half, starting back-to-back threes from Feliz and Bezhanishvili. Cockburn kept the momentum flowing with a block —  his second dunk of the game came nearly three minutes later. Illinois held a 20-point lead five minutes into the half.

Nicholls State picked its offense up a few minutes into the half, shooting 47% through the first eight minutes of the second half. The Colonels hung around, putting pressure on Illinois with their tight man-to-man defense, forcing another eight turnovers just 10 minutes through the second half.

“We’ve got to do a much better job with ball toughness,” said Underwood said of the Illini’s 23 total turnovers. “We had it taken off the dribble, taken out of our hands, and that’s a mental approach to the way you have to play. Those are the things I can’t live with.”

The second-half success continued for Nicholls State as the team shot 54.5% from the field; however, the Colonels crumbled in overtime scoring just 4 points.

“Winners win and losers lose, winners win, real simple,” Underwood said. “Defensively in the overtime, we held them to 1-of-6. We re-engaged, we handled our assignments, our responsibilities. Kofi came back and started protecting the rim, we did what we had to do in overtime.”

Illinois will head into its two-game road trip 1-0 before playing Grand Canyon on Friday and No. 21 Arizona on Sunday.