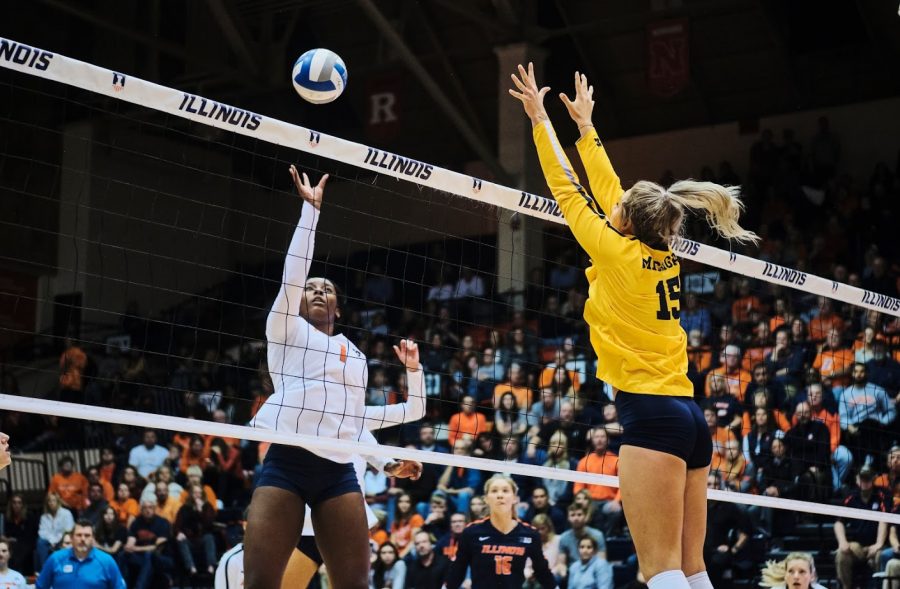 Kennedy Collins sets the ball over a Michigan defender at Huff Hall on Friday.

The No. 21 Illinois volleyball team has eight regular-season matches left before the NCAA tournament in December. The Illini currently sit at 11-10 with a 6-6 conference record, following their last stretch of matches, where they went 2-6.

The team is preparing for their second match against Iowa on Wednesday in Iowa City. The first time these teams met was on Sept. 28, when Illinois swept Iowa. In that match, Illinois was led offensively by senior Jacqueline Quade and redshirt freshman Bruna Vrankovic, who had 14 and nine kills, respectively.

Illinois will look to continue their positive play from the service line to be successful against Iowa. After the win against Michigan State, senior middle blocker Ashlyn Fleming talked about how important quality serving was to the defense and how it gives blockers easier reads on defense.

Head coach Chris Tamas echoed the same sentiment when discussing what the team is focusing on ahead of facing Iowa.

“This time of year, it’s relatively the same in terms of what the message is,” Tamas said. “We need to attack from the service line and make sure we take care of the ball on our side of the net. That means great passing and great set selection and attack selection once we get the opportunity to do so.”

The Illini’s last eight matches only feature one ranked opponent in No. 8 Penn State. That’s a change of pace from what they’ve seen in the last 12 games, which has been six ranked teams.

Tamas wants consistency to be the team’s main focus across their last eight matches. Since starting Big Ten conference play, Illinois has lost to one un-ranked team; but after losing matches following 2-0 and 2-1 runs against No. 8 Penn State and No. 6 Wisconsin, respectively, Illinois is honing in on continuing consistency.

“We play one match, or we play one set that’s really good,” Tamas said, “and we seem to not hold on to that. Obviously, we work on that every day, being consistent … from the beginning until the end of practice. I think for us, it’s just been finding some consistency in what we do.”

After facing Iowa, Illinois will head to Ann Arbor, Michigan, to play against Michigan for the second time this season. Illinois is hoping to split the season series after losing to Michigan last week in Champaign.