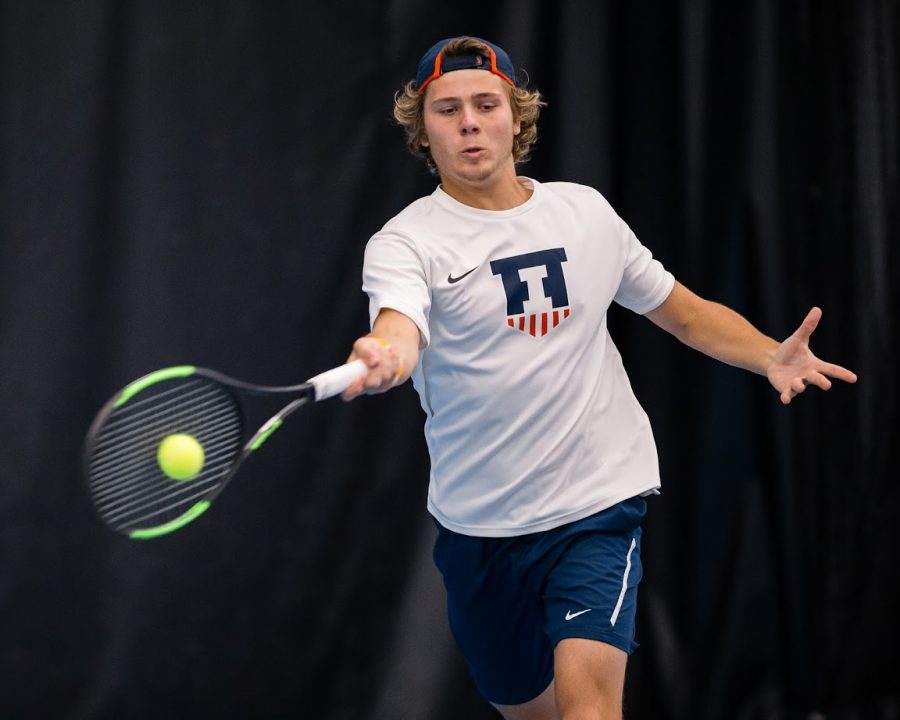 Illinois' Aleks Kovacevic returns the ball during the match against Penn State at Atkins Tennis Center on Friday, April 12, 2019. The Illini won 4-3.

Senior Vuk Budic and red-shirt freshman Alex Bancila represented the Illini at the Dick Vitale Intercollegiate Clay Court Classic Friday-Sunday in Lakewood Ranch, Florida. Both players competed in singles and doubles play, racking up three wins over the course of the weekend.

Budic and Bancila kicked off their respective tournaments with singles competition. Bancila faced Florida’s Blaise Bicknell in the opening round, falling 4-6, 6-3, 1-0 (9). Although his hopes for silverware ended early in the tournament, Bancila won his first-round consolation game, defeating Bryn Nahrung of Florida State in straight sets, 6-3, 6-1. Bancila’s singles play ended in the next round of the consolation tournament; however, as Duke freshman Michael Heller proved too much to handle, eliminating the Illinois redshirt freshman, 6-3, 4-6, 1-0 (7).

Budic opened up his singles-play against Florida State’s Richard Thongoana. Winning in straight sets, 6-4, 7-6 (3), Budic advanced to the second round of the 32-player tournament, where he took on Samuel Rubell of Duke, falling 7-5, 6-3. Although ultimately being eliminated from the main draw, Budic looked to wrap up individual play on a positive note, facing Notre Dame’s William Howells in a consolation game. In an intense back-and-forth match, Budic prevailed, winning 7-6 (7), 7-5.

Budic and Bancila reunited to play together in doubles competition. Their first-round matchup saw the duo face Andy Andrade and Brian Berdusco, representing Florida. The Gator pair triumphed over the Illini, advancing by a score of 8-2. With the loss, Illinois moved into consolation play, where it faced Notre Dame duo Conor Somers and Johnathan Small. The Illini closed out the tournament on a high note, triumphing 8-4.

While the Illini were unable to take home any hardware in Florida this weekend, the team looks ahead to a busy week of competition, with three tournaments scheduled. Senior Aleks Kovacevic will represent Illinois at the Knoxville Challenger in Knoxville, Tennesse, while senior Zeke Clark and junior Alex Brown have been selected for the Oracle ITA National Fall Championships in Newport Beach, California. The team is also set to compete at the Minnesota Gopher Invitational in Minneapolis, Minnesota, Friday-Sunday.