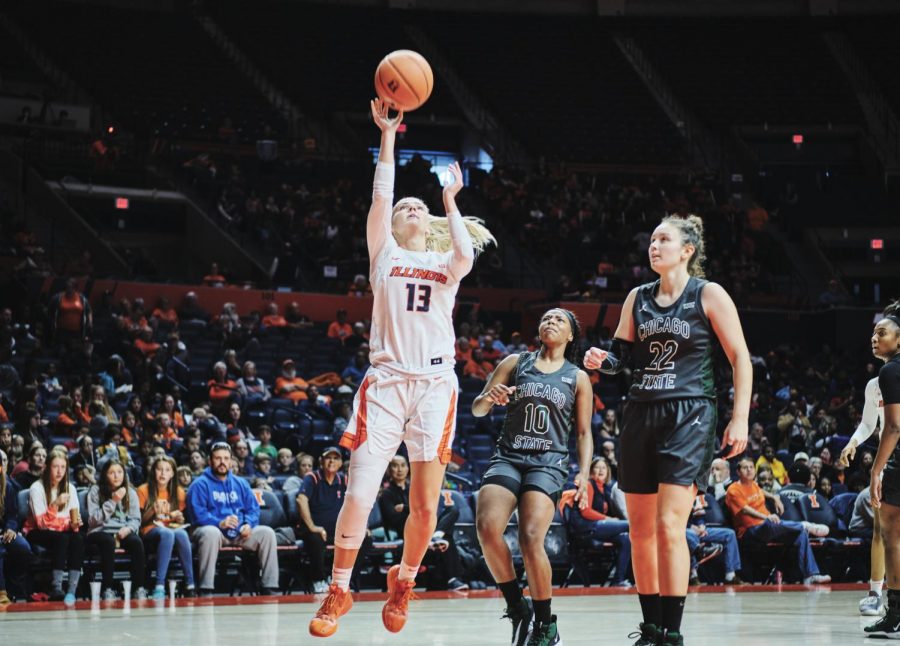 Petra Holešínská drives to the basket for a layup vs Chicago State at the State Farm Center on Tuesday.

Illini women’s basketball opened up its 2019-2020 campaign with a statement 96-66 victory over the Chicago State Cougars. The Illini were led by junior guard Petra Holešínská, who preceded all scorers with a career-high 29 points, and freshman Kennedi Myles, who finished her collegiate debut with 17 points and 15 rebounds.

“(It’s a) great way to start off the season,” said head coach Nancy Fahey. “A couple of things we really wanted to do were push the tempo and have a little bit more free play.I think that energy that you’re feeling on the court has shown itself in practice for the last several months, so it’s nice to see that translate.”

The Illini blew the Cougars out of the water from the jump, scoring 14 unanswered points and holding them scoreless for the first five minutes of the first quarter. The Illini were led early on by the steady shooting of Holešínská and the inside presence of Myles.

Defensively, five first-quarter turnovers turned into easy fast breakpoints for the Illini, who finished the quarter with 28-9 lead. Holešínská, in her first quarter, since her ACL injury sidelined her last season, led all scorers and outscored Chicago State with 12 points of her own on 4-7 shooting and 2-5 from deep.

“It felt great; it’s definitely better to be out on the court than watching your teammates from the bench,” Holešínská said. “My teammates did a good job giving me the ball. I felt like I was basically wide open every time.”

The Cougars offense began to pick up by the second quarter, but it failed to cut the lead to less than 15. After the two free throws by Tyeshia Bowers with 6:33 left to cut the lead to 33-18, Holešínská responded with a fast-break layup and added another three that extended the lead back up to 20 points.

The Illini also picked up their shooting from the first quarter, making 50% of their shots in the second after shooting just 38.1% from the field in the first. Holesãnskã finished out the half with 19 points on 7-12 shooting and above 40% from three, while Myles grabbed down 11 of Illinois’ 30 rebounds. As a team, the Illini shot 43% from the field and 33% from deep while holding the Cougars to just 8-34 from the field (23%) and forcing 13 first-half turnovers.

The Illini opened the second half up with another 13-6 run. Chicago State found life at the free-throw line, shooting 12-for-12 on their free throw attempts, but was still powerless to stop Holešínská as she set a new career-high of 26 points in the period. Myles recorded her first career double-double in the third, and alongside redshirt senior Cierra Rice and sophomore J-Naya Ephraim, each added five points of their own in to close out the third quarter up 73-49.

“It felt really good,” Myles said. “I enjoyed being out there with my team. They motivate me on and off the court, so having them there and being able to do what I love made it easy for this first game.”

Holešínská hit her fifth and final three of the evening in the midst of another 12-0 run that gave the Illini their biggest lead of the evening. Holešínská finished with a career-high 29 points, while Myles finished with 17 points and 15 rebounds. The Illini finished the game scoring 33 of their points off of 23 Cougar turnovers while holding them to just 31.7% shooting from the field. The Illini outscored the Cougars in the paint 38-22 and outperformed off the bench to the tune of 32-9.

“When a player goes through rehab for an ACL injury, that’s a tough thing to go through,” Fahey said. “It’s a team sport, and all of a sudden you rehab by yourself. So when players come back from those things, it’s special in the first place in a sense of watching her have a night like tonight because you’ve got to have respect for that. I’m just really excited to have her and her leadership back out on the court. I’m really happy for her.”

The Illini shot 44% as a team after their streaky shooting first quarter, while shooting 50% from the field in both the second and fourth quarters. Rice and senior Ali Andrews each added 10 points, freshman guard Jeanae Terry finished with four blocks and Ephraim and freshman guard Jada Peebles each led the Illini with four out of the teams 21 assists.

“This is a fun team to watch,” Fahey said. “We had good balance moving the ball around, plus we got to the free-throw line. So it was a good start, but we also had some things exposed that we’re going to get better at. Myles had a double-double. Petra did a great job, not only shooting the ball, but the dynamics of her court leadership is something that we have to make sure that we shot up because she did a great job showing her experience out there.”