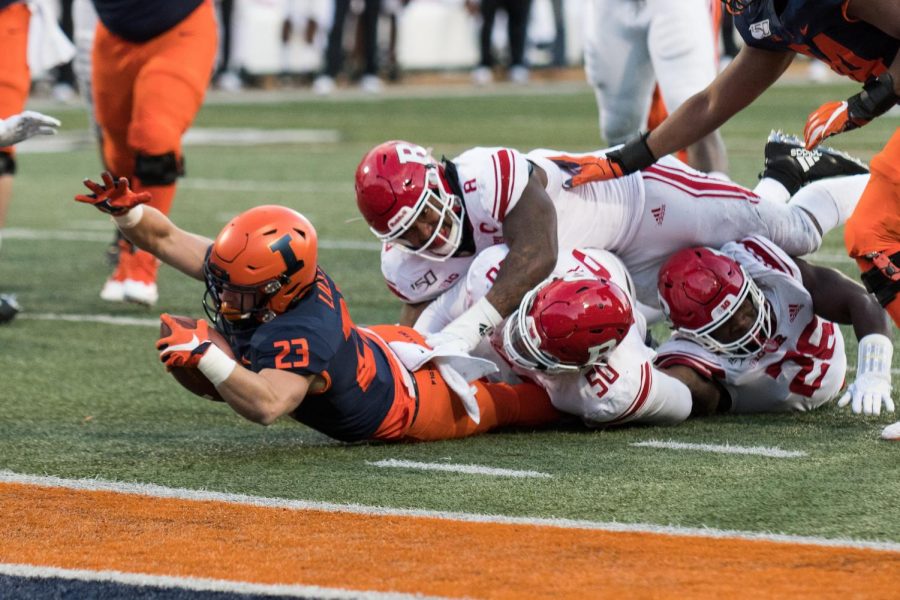 Illinois running back Conner Lillig falls just short of the goal line during the game against Rutgers. The Illini won 38-10. Illinois will face Michigan State on the road Saturday.

Illinois football continues its quest for a bowl game as the team heads up north to take on Michigan State at Spartan Stadium Saturday afternoon.

“As we talk about being in the playoffs, this is it,” said head coach Lovie Smith. “This is a playoff game for us, and we’re looking at it that way. A lot of guys are playing their best football which is big.”

Two of those touchdowns came defensively, first after a forced fumble by Isaiah Gay that fell right into the hands of Nate Hobbs for a 33-yard return. Then in the fourth quarter, Dele Harding carried an interception for a 54-yard pick-six that proved to be the final dagger.

“Of course, it’s a good feeling to be playing better football,” Smith said. “The last three weeks, going into the third quarter, we’ve played good ball and have been able to get three wins. It sets up the biggest fourth quarter of a season we’ve had since we’ve been here. This is a position you want to be in.”

As the Illini look to extend what’s been their winningest stretch under Smith’s tenure to four games, they face a Spartan team that’s gone through a gauntlet of a schedule in the Big Ten East. After starting its season 4-1 and 2-0 against Big Ten opponents, Michigan State dropped three straight games in blowout fashion against No. 3-ranked Ohio State, No. 16-ranked Wisconsin and No. 5-ranked Penn State, before hosting a bye week to prepare for Illinois.

In their last match, the Spartans were helpless against the Nittany Lions. Penn State scored 28 unanswered points, with the only response from Michigan State being a lone touchdown from freshman running back Anthony Williams Jr. midway through the third quarter. Senior quarterback Brian Lewerke threw for 165 yards on 16 completions, no touchdowns and an interception. Senior linebacker Tyriq Thompson led the Spartans with 11 tackles, while junior linebacker Antjuan Simmons added nine of his own.

“They’ve played outstanding defense for a long time,” Smith said. “Offensively, they’re a little bit more spread out than what we’re used to seeing from them. They have a good line and are skilled. Michigan State is one of the best programs in college football, and that’s how we’re looking at it going in.”

This matchup marks the first time the two teams have seen each other since 2016, where the Illini scraped by the Spartans in a 31-27 win at Memorial Stadium. The Spartans will be looking to take advantage at home after dropping three tough road games, and with the Illini coming off of three-straight Big Ten wins, a fourth-straight loss at home could haunt the Spartans for the rest of the season.

For the Illini, a fourth-straight win would grant them bowl eligibility for the first time since 2014, where they lost against Louisiana Tech for the Heart of Dallas bowl. For both teams, Saturday’s matchup will be their most pivotal game of the season.