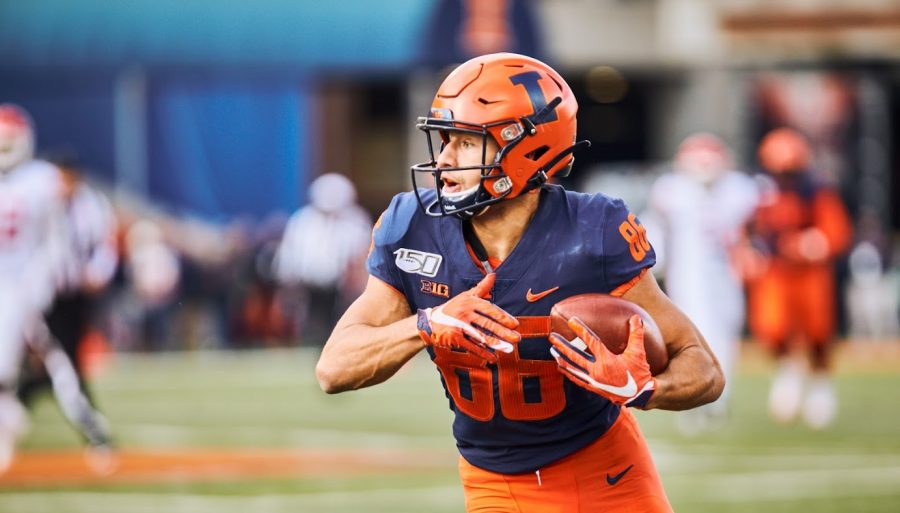 Sophomore wide receiver Donny Navarro carries the ball at Illinois’ game against Rutgers at Memorial Stadium Saturday. Navarro emerged off of Illinois’ bench as a main contributor during the Homecoming game against Wisconsin, where he caught a slant pass and broke free for a 48-yard touchdown.

Illinois came out of the gate slow against Rutgers Saturday and was in search of a spark early on. That jolt came from receiver Donny Navarro, who went up and out jumped a Scarlet Knight defensive back, hauling in a pass and advancing to the 13-yard line before being tackled for a 48-yard gain. The play set up an early touchdown run from Dre Brown to put Illinois on the board.

“First (of all), it was a great ball by Brandon (Peters),” Navarro said. “I kinda knew pre-snap I was getting the ball. So I tried to make as much separation as possible, (and the) ball was up in the air. When the ball’s up in the air, it’s mine. That’s just my thought process, so I was gonna do everything I could to go get that ball.”

The catch was the latest in a recent string of big plays from Navarro.

Filling in for injured receivers Trevon Sidney and Ricky Smalling, Navarro is making the most of his opportunity starting.

“Awesome catch, tremendous catch, and with each catch, each game he continues to get more confidence with our staff,” said offensive coordinator Rod Smith. “(I’m) extremely impressed and happy with (Navarro) and his performances so far.”

Making big plays and earning major playing time isn’t something often afforded to walk-ons, but Navarro is proving to be an exception to the rule.

Navarro began the year primarily returning punts, but he forced his way onto to the field through his solidness after injuries to other receivers.

Beginning with the Eastern Michigan game on Sept. 14, Navarro started to gain reps in the slot, catching a 10-yard pass in the 34-31 loss.

He followed with three catches for 33 yards two weeks later at Minnesota, serving as a security blanket for the forced-in Matt Robinson.

But his big break came in Illinois’ upset over then-No. 6 Wisconsin, catching a slant pass and breaking free for a 48-yard touchdown against one of the nation’s top defenses.

“For me, I’m glad that I can be a part of that and contribute to the wins,” Navarro said. “It (has) meant a lot. If I can do anything to help this team win, then I’m gonna be satisfied.”

Navarro was forced to sit out during the 2018 season after transferring in from Football Championship Subdivision school, Valparaiso, where he played for one season and led the team in receiving statistics across the board in 2017.

With an entire season off to prepare, Navarro learned the ins and outs of the offense, something that has served him well this season, as he’s been counted on by the coaching staff for knowing where he needs to be.

“If you’re on the football team, you’ve done something that shows you can get the job done,” said head coach Lovie Smith. “Sometimes you have to wait for your opportunity. I think that’s the case with Donny. He has done some good things around here, contributed on special teams. (In) what little time he had gotten, he took advantage of it, and if you continue to do that, you get more reps.”

With Sidney done for the year, Smalling banged up indefinitely and freshman Casey Washington still learning the offense, Navarro will continue to be counted on to make plays as Illinois attempts to secure a sixth win and, with it, bowl eligibility.

And with more reps each week, Navarro’s confidence continues to skyrocket.