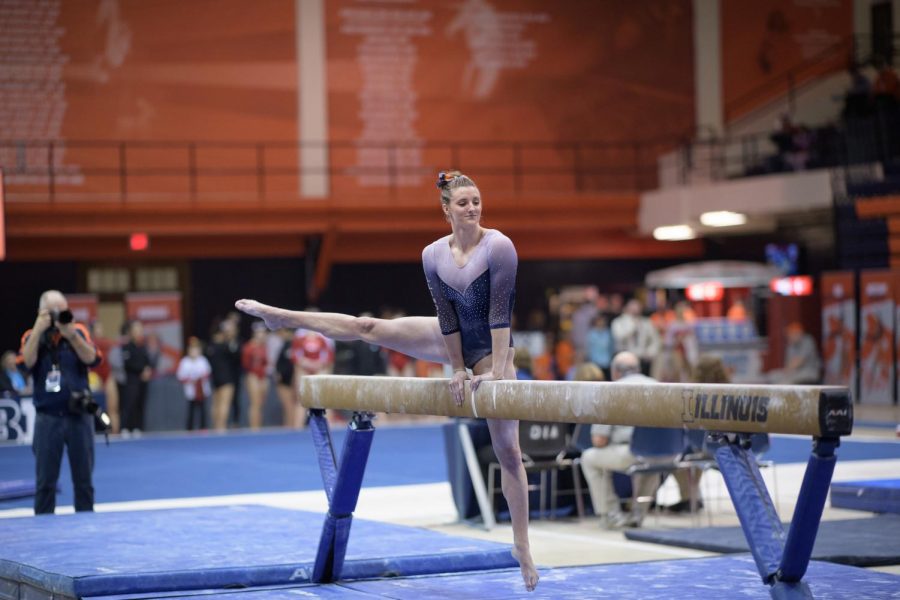 Mary Jane Otto performs on the balance beam at Huff Hall on March 9. The Illini finished second with a score of 196.075.

The Illinois women’s gymnastics team is set to start the season Saturday at Huff Hall in the Orange and Blue Exhibition.

Last season, the Illini narrowly missed out on the NCAA regional final, ending a season that saw the team finish second at the Big Ten Championships.

The Illini are also skewing young this season, with 11 of the 21 members being freshmen or sophomores.

This season, the Illini return much of their core, including juniors Kylie Noonan and Kasey Meeks, and a strong senior class, including Karen Howell.

Noonan has taken on a leadership role for the Illini this season, guiding her teammates through summer workouts when the coaching staff wasn’t around.

“(Captains) make sure the team, over the summer, is keeping on track,” Noonan said. “A lot of it is just planning assignments for the team, helping them stay focused over summer months when practice is a little bit more relaxed; and so we’ve been doing a lot of that. Just of a lot of making sure the team stays motivated.”

Walsh is in her third season at Illinois. Her results at the Big Ten meet have improved each season, with the Illini finishing third in 2018 and second in 2019.

The Illini have a tricky schedule this year, starting the season at Missouri on Jan. 4. The Illini last competed against the Tigers in 2018, falling, 196.625-195.400, in a meet with Missouri and the University of Illinois at Chicago at Huff Hall.

Walsh thinks the team is unified and has the potential to have a more successful season, and observed the team’s efforts, which began during summer open gyms when the coaching staff weren’t there. She recently tweeted a picture of the team in practice.

“They committed, they stayed, they trained,” Walsh said. “(We’re) more structured than in the past, and I think that the athletes are really thriving because the level of expectation and excellence has risen up. And they are all meeting the challenge.”

As Walsh enters her third season at Illinois, a pattern at the Big Ten meet has emerged. Her first team finished third, her second finished second. And now, she’d like to see this year’s team finish first.

“I think Big Ten is definitely the meet that they’re looking forward to the most,” Walsh said. “They’re hungry for it, and we got third my first year, second my second year, so they know exactly what they’re after for this year.”

Noonan agreed the team can finish first in the Big Ten this season.