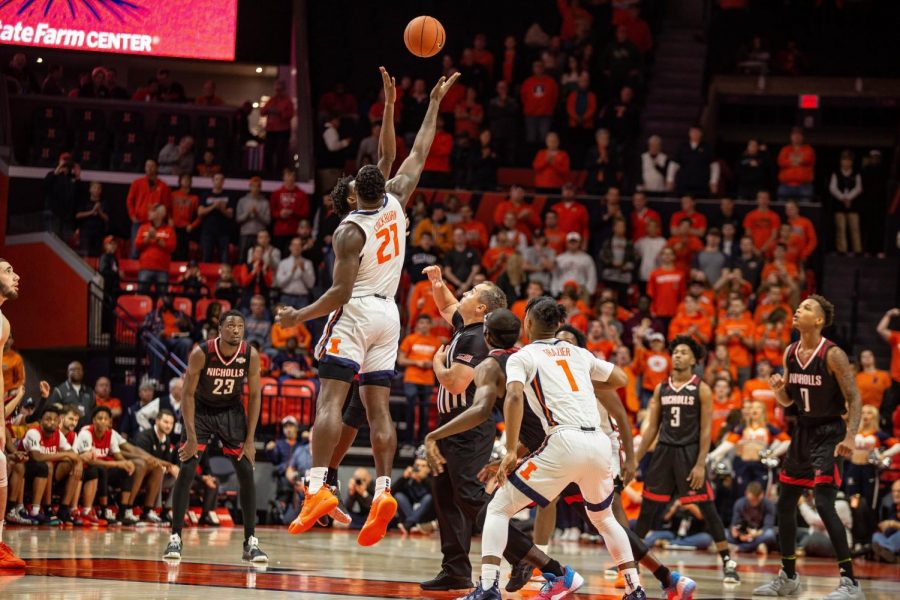 Illini basketball kicked off its two-game road trip with an 83-71 win against Grand Canyon University. The Illini were propelled by dominance in the paint from freshman big man Kofi Cockburn and the penetration of senior Andres Feliz, overcoming a three-point shooting drought in the first half and foul trouble.

“Home teams are always going to make their run. That’s the advantage of being at home. It’s loud and it’s so well-choreographed,” said head coach Brad Underwood said. “It forces you to break down in your communication, and I thought we handled that very well. Grand Canyon’s got something special going on, and Dan Majerlie’s doing a great job here.”

Cockburn started things off inside for the Illini, scoring six of their first eight points and dominating on the offensive glass from the beginning. However, three early turnovers kept the Antelopes in the game, tying the game at 8-8 behind strong guard play from freshman Javon Blackshere Jr.

Cockburn broke  into double digits with 11:45 left in the first half, while the Illini outrebounded the Antelopes by seven and grabbed eight offensive rebounds. Cockburn threw down an alley-oop pass from Dosunmu, who followed with a jumper of his own in the next possession to extend the Illini lead to 25-14.

In the next minute, GCU scored on three straight possessions, scoring eight unanswered and cutting the lead back down to three. Andrez Feliz responded by scoring six of the next eight Illini points and sparking an 8-2 run of their own. In the final five minutes, Feliz scored four of Illinois’ next eight points. The Antelopes pressured the Illini lead, but never managed to cut it to more than four.

After two free throws from Grand Canyon’s Isaiah Brown, Illinois finished the half up 41-37. By its end, the Illini outrebounded the Antelopes 25-15 and shot eight more free throws, but turned the ball over nine times and shot just 1-6 from arc compared to the Antelopes’ 5-9.“The one thing to our advantage when you have a guy like Kofi down low, then you can get to the foul line and make free throws, your guards can drive and your offense becomes really hard to guard.” Underwood said. “That’s was a formula since our South Carolina game, and we’ve played with that mentality.”

Trent Frazier and Giorgi Bezhanshvili scored on a jumper and an and-1 layup to jumpstart the Illini offensively in the second half. A jumper from Isaiah Brown would slow the bleeding, but ball movement for the Illini meant buckets for Cockburn and Da’Monte Williams, and threes from Dosunmu and Alan Griffin. Combined with their defense forcing the Antelopes to shoot 2-10 at the start, the Illini steadily pushed to a 51-39 lead in just the first two minutes.

The Illini continued their run through the 10:36 mark in the second half and created their largest lead of the game at 64-49. Over the next ten minutes, the Antelopes would slowly pinch away at the lead bit by bit.

The Illini staved off an Antelopes run at the free-throw line but were constantly pressured by a Grand Canyon offense that put Bezhanishvili and Cockburn in foul trouble late in the game.

Over the next six minutes, the Antelopes would shave the Illini lead to just four capped off by a layup from Johnson. The Illini would respond with a 6-0 run to extend their lead to 77-67 with 2:23 left. Rhymes and Blackshear would respond to cut the lead back to six, but Andrez Feliz would hit a floater that put the Illini up 79-71 and proved to be the dagger the Illini needed.

Cockburn finished the game 23 points on 8-12 shooting, while Feliz finished with 21 points on 7-14 shooting. As a team, the Illini outrebounded the Antelopes 52-26, and dominated the inside, shooting 21-30 on their free throws compared to 9-16 from Grand Canyon.

“I think the one that Kofi does is he occupies bodies,” Underwood said. “Andrez Feliz rebounds for a guard, Alan Griffin rebounds for a guard, Da’Monte Williams rebounds for a guard, and Giorgi’s made a much more concentrated effort to get on the glass. 20 offensive rebounds is a great number, and the important piece to With the win, the Illini improve to 2-0 and start their Arizona road trip with a win. On Sunday they head to McKale Memorial Center, where they’ll face the Arizona Wildcats.

“It’s going to be a Big Ten type of atmosphere. They’ve sold out for twenty plus years, Sean Miller does an incredible job, and they’ve got three very talented freshman impacting the program at a high level.” Underwood said. “It’s going to be a challenge, but you want to go find out what you’re made of. We found a little bit about ourselves tonight, and we’ll try to grow on that.”