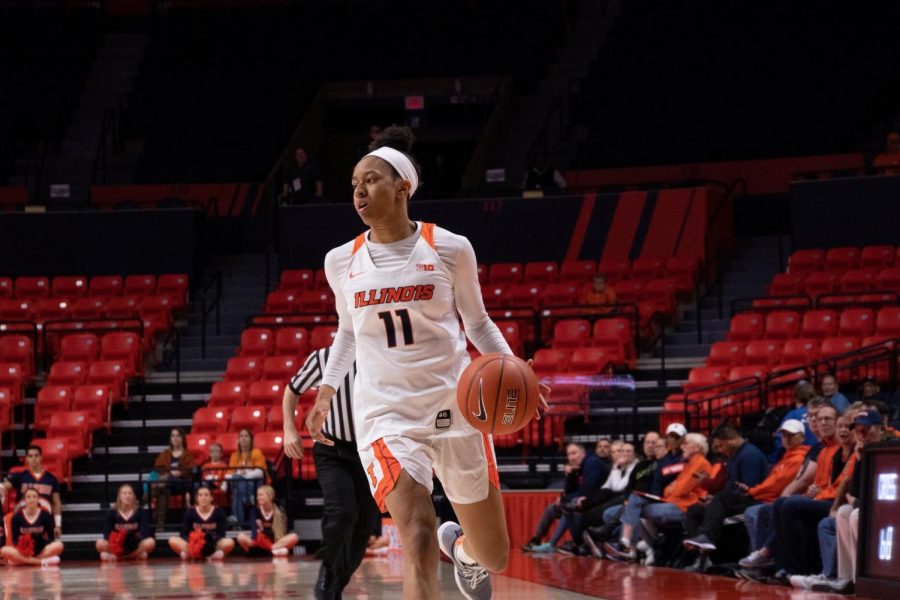 Jada Peebles runs down the court at the State Farm Center on Saturday.

The Illinois women’s basketball team improves to 2-0 after fighting back from being down 16 in the third to seal their overtime victory against Holy Cross on Saturday. The game ended after one overtime period at a score of 78-75, with the Illinois offense being led by forward Ali Andrews as she poured in 20 points for the win.

Andrews notched her first double-double of the season with 11 rebounds to go along with her 20 point game, and freshman guard Jada Peebles had 17 points on 50% shooting.

“Great win today. We needed that one,” said head coach Nancy Fahey. “Coming back from 16 down at half time, I thought the kids did a great job at bouncing back.”

Fahey was quick to give credit to the two freshmen who scored in double digits in the game, Peebles and guard Jannae Terry.

The first quarter was a close one, with the two teams trading leads for the whole period; however, Illinois was able to outscore Holy Cross 15-14 in the first.

The second quarter is where Holy Cross started to build their lead with a pair of three-pointers by guards Madalyn Smith and Kathryn Pedi, making it 23-28 and starting what would be a 17-8 run to end the quarter 37-28. This run bled into the third quarter and gave Holy Cross their most significant lead at 44-28.

The Illini then went on a run of their own in the last 7:47 that started from an Andrews three-pointer, outscoring Holy Cross 18-4 to end the third quarter.

The team stayed hot as they built a seven-point lead with 7:22 left in the fourth quarter. But, as the quarter went on, Holy Cross did not go away, with guard Jenay Faulkner scoring the game-tying basket with 44 seconds left in regulation. Both teams missed go-ahead scoring opportunities in the last 30 seconds, which forced overtime.

The overtime period stayed close, but Illinois guard Petra Holešínská sinking two free throws put the Illini up three. They were able to get the defensive stop against Holy Cross to seal the overtime victory.

Illinois got a substantial contribution from their bench, who scored 22 points to double how much the Holy Cross bench scored.

Andrews talked about how much the bench meant to the team’s win.

“We had a high score from our bench,” Andrews said, “and that’s the stuff that we need from this team. We need everyone to step up, everyone to make plays, and everyone did that today. And that was really exciting to watch and play with.”

The team did struggle from the free-throw line, shooting 37.5% from the line. This was a dip from their last game against Chicago State, where they shot 70.9% from the line.

The Illini will be off until Wednesday when they will be back at State Farm Center to face the Austin Peay Governors, who are 2-0 this season.