Illinois suffers first loss of the season to No. 21 Arizona 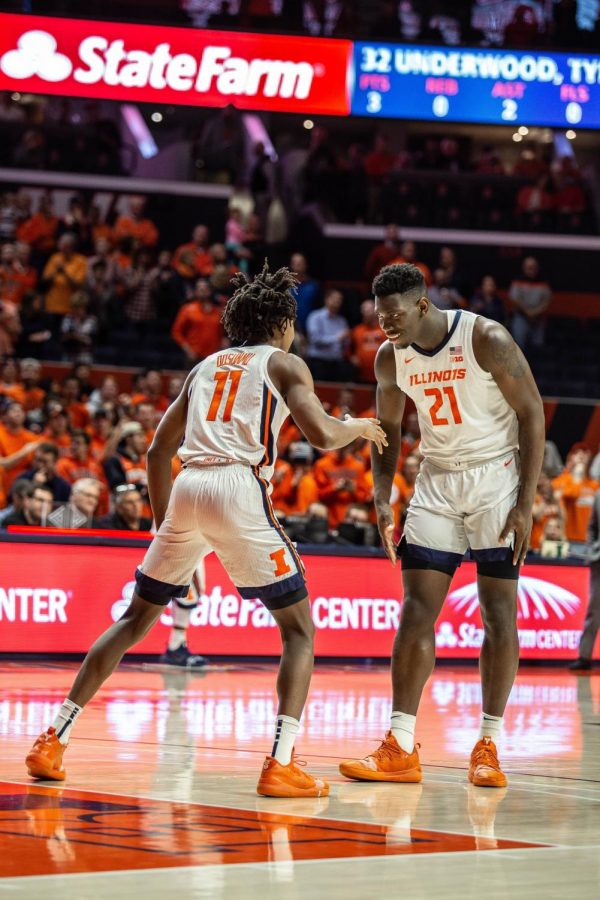 Sophomore Ayo Dosunmu (11) and freshman Kofi Cockburn (21) prepare for Illinois' first regular season game against Nicholls State at State Farm Center on Nov. 5, 2019. The Illini lost to the Arizona Wildcats in their first road swing of the season 90-69 Sunday night.

After flirting with upsets in its first two games, Illinois finally faced a team capable of taking advantage of its mistakes and received what had been coming, as No. 21 Arizona wiped the Illini out, 90-69, in Tucson.

A rematch of arguably Illinois basketball’s most glorious victory, the memorable 2005 elite eight comeback, the Illini were simply out talent-ed by the Wildcats.

For the Illini, the three-headed guard trio of Andres Feliz, Trent Frazier, and Ayo Dosunmu all contributed with double-figure scoring individually, with 13, 14 and 15 points receptively, but that was pretty much it offensively.

Illinois head coach Brad Underwood has shown a propensity to use a starting lineup of Feliz, Dosunmu, Frazier, Kofi Cockburn and Giorgi Bezhanishvili early on, and against what is essentially a three-point guard-two center lineup, not having a true wing player is hurting the Illini massively on defense, as opposing players who profile as small forward types have scored double figures in all three of Illinois’ contests thus far.

Nicholls State’s Dexter McClanahan went off for 25 points in Illinois’ Nov. 5, narrow 78-70 opening victory, while Grand Canyon’s Lorenzo Jenkins scored 12 points in Friday’s 83-71 win in Phoenix. Green proved to be no exception. The likely lottery pick known for being a slasher and finisher at the rim had it going from deep, draining four three-pointers in seven attempts.

The trouble in stopping opposing small forwards can be traced in no small part to the current absence of Tevian Jones to an indefinite suspension. The 6-foot-7 sophomore, who is ironically an Arizona native, has battled numerous suspensions in his one-plus years in Champaign and has yet to be granted much of a chance to live up to his four-star rating as a high school senior.

Without a wing player capable of being versatile on defense, Illinois’ two-big man lineup got to run to death by Arizona, as Mannion continuously pushed the ball quickly up the court off of misses and constantly found Green and Nnaji for open looks.

The narrow margins against Nicholls State and Grand Canyon should have served as wake up calls for Underwood’s team, but a drubbing like Sunday night’s had to have done the trick if the previous two close calls couldn’t.

It’s clear this team is going to need more out of senior Kipper Nichols and sophomore Alan Griffin with Jones out indefinitely if it’s going to have any hope of improving both in terms of defending wings and general flow on offense.

Though the Wildcats missed the tournament last season, it is important to keep in mind that losing at Arizona in the third game of the season is not an unforgivable loss. Despite Illinois’ recent success in recruiting with players like Dosunmu and Cockburn, both Mannion and Green are higher rated recruits than any player on Illinois’ roster, and the Arizona team is still littered with elite prospects up and down the bench, something that a still-rebuilding Illinois team may not be ready to handle quite yet.

For 2-1 Illinois, the schedule lightens up over the next two weeks, as the team is completely off next week, and plays Hawaii, The Citadel, Hampton and Lindenwood after that, choosing not to take part in any preseason tournaments this season.

With the extended time off, finding a lineup that provides more defensive versatility will be key for a unit that has the talent to score with the best of them in college basketball.