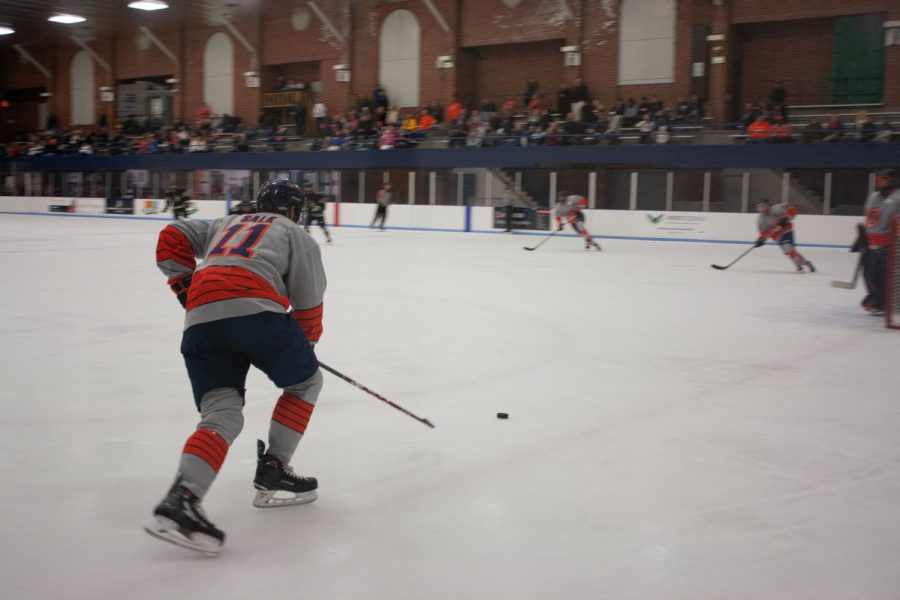 Illinois hockey headed to Ames, Iowa, this weekend to take on rival Iowa State. Playing in a smaller-than-regulation arena, defensive battles were in store for two teams looking to catch fire in the hearts of their schedules.

In the first game on Friday night in Ames, both the Illini and the Cyclones played strong after the first puck drop, with each defense limiting the offenses. The Illini had one strong chance to strike first in the game with the Cyclones committing a penalty with 1:45 left, resulting in a power play for the orange and blue. The Cyclones held on, though, keeping the game deadlocked at 0-0 going into the second period of play.

The stellar defensive performances by both clubs continued into the second period with each team not catching fire offensively, playing to Iowa State’s style of play.

But with just over 11 minutes left in the period, Iowa State was finally able to break through and take the 1-0 lead with a goal by freshman forward Stuart Pearson. Illinois went on the attack quickly but were unsuccessful. At the end of the period, Illinois trailed just 1-0.

The third period was a battle with each team making huge stops to either keep its team in the lead or to put it away. The Cyclones, who gave up 12 shots on goal in the second period, tightened up defensively, holding the trailing and aggressive Illini to only 10 shots the entire period, an impressive feat since the Illini were on the attacking more.

Trailing by only 1 point with just three minutes remaining, the Cyclones finally put the game on ice with a defense Joey Marcuccilli goal to make it 2-0. The Illini then pulled their goalie and put on an extra skater to try to make a last-ditch comeback, but all that resulted in was an empty-net goal by the Cyclones to make the score look more deceiving. At the end of the game, the Cyclones pulled away for a 3-0 victory.

“When you have 40 shots, you are doing something right,” said head coach Nick Fabbrini. “We just weren’t gritty enough.”

The beginning of the second game felt like deja vu, with each team once again shutting one another down in the opening period. The goalies played especially well, saving a combined 25 shots on goal.

After four consecutive periods of being held scoreless by the Cyclones, the Illini took advantage of a power play opportunity, scoring on a defense Chance Homerin goal to make it 1-0. Things quickly went back to normal, though, with Iowa State’s defense regaining their form.

Despite being down 2-0 and in desperation to spark their offense, the Cyclones were shut down in the third period, being held to only six shots on goals after 23 shots in the first two periods. Even though the Illini were held scoreless in the final period, they still managed 11 shots on goals and controlled the time of possession. At the final buzzer, the Illini walked off with a tough and efficient 2-0 victory to split the weekend series.

“We started off a little slow, but everyone was engaged,” Fabbrini said. “Everyone contributed getting into the zone, we finished our checks, and we wore them down.”

Although the Illini were aiming for the weekend sweep, they were able to split it with a very stout Cyclone team with a strong home court. With the victory, the Illini have won four out of five, improving to 8-5-2. Illinois comes back home next weekend with a two-game series against Northern Illinois University on deck.