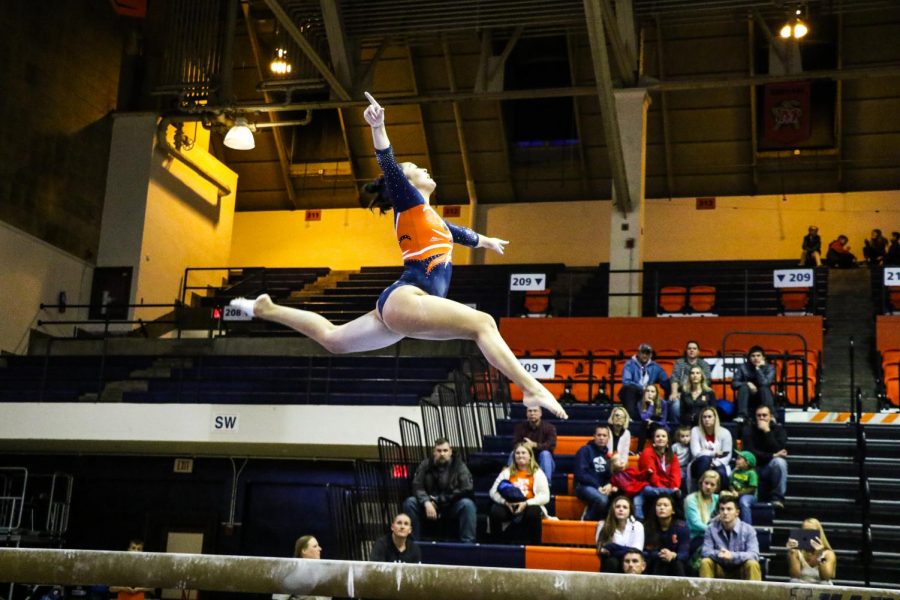 Kylie Noonan performs on the balance beam at Huff Hall on Saturday. The Illinois women’s gymnastics team competed in the Orange & Blue exhibition alongside the men’s gymnastics team, where they were split up into “orange” and “blue” squads based on which events the gymnasts competed in; the orange team won 10-9.

All the events were within each team; there were no co-ed events, but the teams were split up into “orange” and “blue” squads based on which events the gymnasts competed in.

Junior Nicole Biondi started off the afternoon on the uneven bars against senior Morgan Bixler. Biondi got the point for the Orange team, as it went up 1-0.

Junior Kylie Noonan completed her first floor exercise routine of the season, competing against senior Karen Howell. Noonan’s routine put the blue team on the board, who came into floor exercise facing a 2-0 deficit.

Heading into the uneven bars in the second rotation, the teams were once again tied. Freshmen Lexi Powe and Mia Takekawa faced off, where Takekawa got the point to put the orange team up 4-3.

Starting off in the third rotation, senior Rae Balthazor and freshman McKenzie Eddy competed in floor exercise, and the orange team cut its deficit to 1, down 6-5.

When sophomore Shaylah Scott and Noonan competed in balance beam in the middle of the third rotation, the orange team was tied with the blue team at 6-6. Scott won the point for the orange team, giving them a 7-6 edge with seven events left in the evening.

Takekawa and freshman Arayah Simons competed in the balance beam, and Takekawa tied it up at 8-8.

In the uneven bars, Karen Howell scored the point to put the orange team up 10-8 heading into the final event.

The final event was between the men’s team seniors Jordan Kovach and Hamish Carter. The orange team won, 10-9, in the end.

“Being first up of everyone, scary, but I feel like me and Morgan did a really good job,” Biondi said. “(It) kind of set us up (because the) orange team won, so hopefully set us up for the win.”

The scoring for the exhibition varied from other meets, as no numeric scores were handed out. Guest judges, including Illinois soccer players Lauren Stibich and Ashleigh Lefevre, waved either an orange flag or a blue flag to indicate which team earned the point. Fighting Illini Athletics additionally had blue and orange pieces of paper fans picked up and waved around to attempt to influence the judges.

Even though the meet has no merit on the season standings, head coach Nadalie Walsh thought the team got off to a solid start.

“This is an exhibition, and we wanted them to enjoy it,” Walsh said. “I didn’t see jitters, I saw excitement. I think I have a really great group of competitors.”

The Illini have no more meets this year and next compete in the new year at Missouri on Jan. 4.