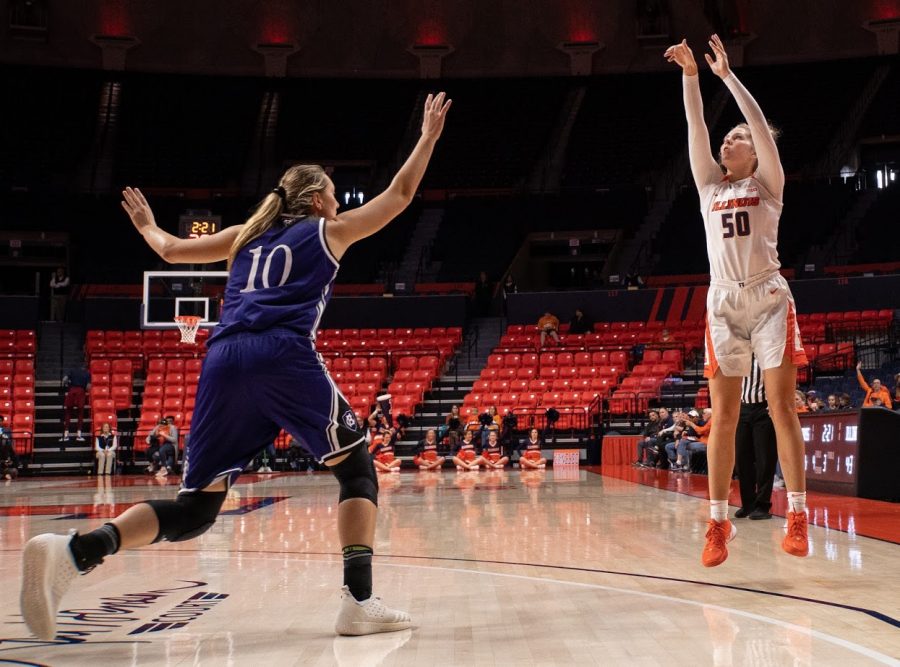 Ali Andrews pulls up for a three pointer at the Illini’s game vs. Holy Cross at the State Farm Center on Nov. 10.

The Illinois women’s basketball team started it’s season 2-0 for the second consecutive year, after beating Chicago State and Holy Cross to start their 2019-2020 campaign. The Illini will look to make it three in a row when Austin Peay comes to State Farm Center on Wednesday.

In its last game, Illinois came back from a 16-point deficit in the third quarter to force overtime against Holy Cross. Illinois went on to win the game 78-75 behind performances from senior Ali Andrews, who had 20 points and 11 rebounds, and freshman Jada Peebles, who put up 17 points.

But Peebles wasn’t the only freshman to contribute in the game. Freshman Jeanae Terry scored 12 points off the bench on an efficient 5-9 from the field and Kennedi Myles scored 11 points with five steals to go along with her points.

Peebles and Terry’s scoring could be helpful to the Illini off the bench if head coach Nancy Fahey moves Peebles there when Brandi Beasley comes back from the concussion she suffered before the Illinis’ first game. The senior guard is a returning starter from last year and is the highest-scoring returner from last year.

Austin Peay will also come into the game at 2-0 after wins against Kentucky Wesleyan and Christian Brothers University.

One of Illinois’ biggest shooting threats, redshirt-junior Petra Holešínská, will look to get back on track against Austin Peay, after going 0-10 with only two points against Holy Cross. However, those two points came as game-sealing free throws during the last minute of overtime.

Austin Peay has a balanced offensive attack, with four players averaging double digit points so far this season. The Illini will also have to deal with Austin Peay’s 43.9 shooting percentage from the three-point line.

After Wednesday’s matchup against Austin Peay, Illinois will continue its homestand hosting the Illinois State Redbirds on Sunday, who are 1-1 on the season with a loss to Marquette.