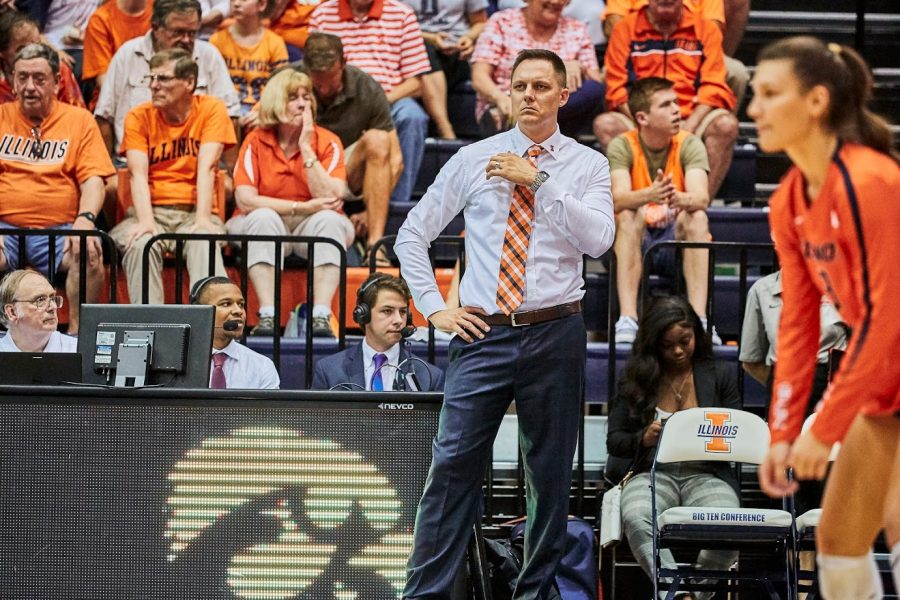 Coach Tamas gazes at the court at Huff Hall on on Sept. 28.

The Illini lost their last match-up last weekend against the Wolverines 3-1 in Ann Arbor, Michigan.

Head coach Chris Tamas said the team was struggling with consistency against Michigan.

“We played good volleyball in some spurts,” Tamas said. “We just haven’t been able to sustain that consistency over a whole match against the better half of our conference … We’re able to stop runs and make a few of our own, but then we bleed a little bit too much when the play is in our favor.”

The Illini have been dealing with inconsistent plays all season but are still ranked in the AVCA Coaches Poll, even after losing to an unranked Michigan team twice in back-to-back weekends.

The Illini will attempt to stay in the top-25 as their next opponent is No. 8 Penn State. This will be the second Penn State and Illinois match-up of the season, with Penn State taking the first match 3-2.

The final match came followed an exhausting three-match road trip with two other top-10 opponents in Wisconsin and Nebraska. During the match, the Illini jumped out to a two-set lead over the Nittany Lions but gave up the last three sets. Two of those sets were decided by only two points.

Penn State has yet to lose to a team outside of the top-10 this season. The Nittany Lions have a balanced offensive attack, with five players averaging over two kills per set. The team is led offensively by sophomore Jonni Parker, who averages 3.51 kills per set.

Sophomore middle blocker Serena Gray is also a big part of both Penn State’s offense and defense. In their first match, Gray scored 17 kills on the Illini on a .378 hitting percentage.

After Illinois plays Penn State, they will face the Rutgers for the first time this season. Rutgers has racked up six of its eight wins against non-conference opponents, with two conference wins coming against Iowa and Northwestern.

Rutgers is led on offense by outside hitter sophomore Anastasiya Kudryashova. She averages 2.77 kills-per-set on a .176 hitting percentage on the season.

Tamas talked about what the focus of the team is going to be coming up this weekend before Penn State and Rutgers.

“We need to be intense and intent on what we’re doing in practice,” Tamas said, “and making sure that we’re really good about squeezing the most out of every rep and treating it like it’s 23-all in whatever set that we’re playing.”