Petra Holešínská bounces back from injury 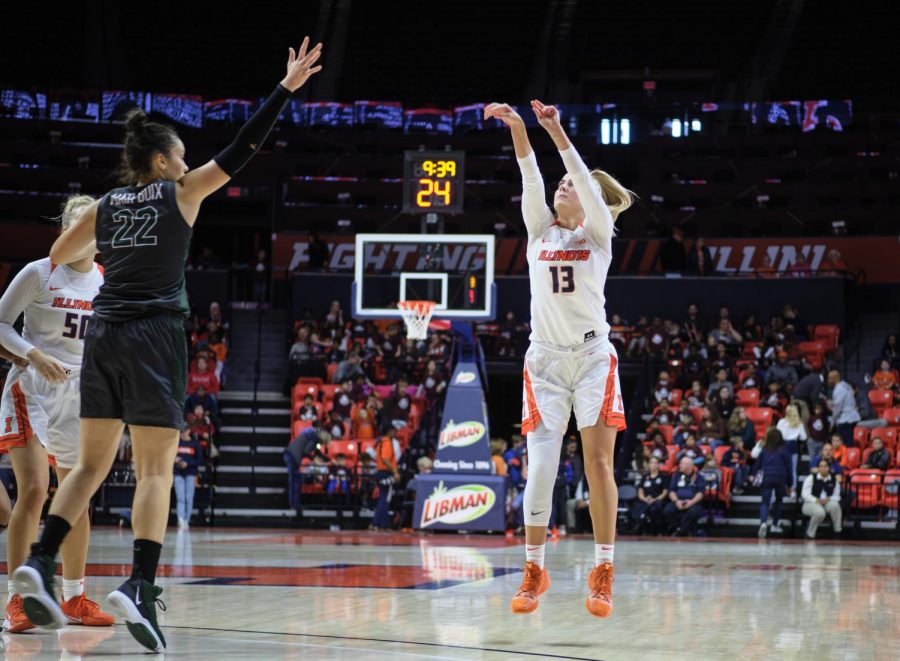 Petra Holešínská shoots a three-pointer against Chicago State at the State Farm Center on Nov. 5. Following an anterior cruciate ligament tear, Holešínská has already stood out as a major contributor for the Illini.

Petra Holešínská’s basketball world was flipped upside down after an anterior cruciate ligament tear in practice sidelined her before the start of the 2018-19 season. The injury came after the redshirt junior carved out a niche role as a shooting specialist within head coach Nancy Fahey’s offense.

“It was tough. It takes that seven to eight months to fully recover post-surgery,” Holešínská said. “I think, the worst part was the time between injuring myself and getting the surgery.”

She started 29 of 31 Illinois games in her freshman year, averaging 10.5 points per game, third in the team for scoring, was among the Big Ten freshmen scoring leaders and knocked down a team-leading 54 threes, ranking third all-time for most threes hit by a freshman in school history.

Meanwhile, her 35.5% three-point shooting was good for fifth all-time among Illinois freshman and led all Big Ten with a 45.6% clip from deep in conference play.

Holešínská saw a slight decrease in her role in the offense in her sophomore year. Her minutes and individual points per game dropped, but she still finished second on the team with 36 threes on the year. During the sophomore slump, her three-point percentages dropped from 35% the year earlier to just 30% in her second campaign.

Holešínská entered her junior year eager to bounce back and re-establish herself as one of the best shooters in the Big Ten, but the aforementioned ACL injury sidelined her for the season before ever stepping foot out on the court.

“It felt like I just wasn’t doing anything but waiting,” Holešínská said. “But afterward, my recovery felt pretty fast. I was able to walk again and start running soon, too. I’m really grateful for all of my teammates, coaching staff and trainers supporting me.”

As soon as she could get back on the practice floor, Holešínská was working on her jump shot. It started with just getting clean reps up, but as her condition improved, she gradually incorporated shooting with movement and balance.

While fellow senior guard Brandi Beasley sidelined Illinois’ season-opener against Chicago State, Holešínská proved to be the next leading woman for the Illini. She started her season debut and return from injury off to a hot start with 12 first-quarter points, and her outside touch cleared the way for the Illini to dominate. In the evening, she led the Illini in scoring and scored her own career-high 29 points on 56% shooting and connected on five three-pointers.

“It felt great, but I don’t really think about the personal accomplishment. I wanted to win, and that’s what we did,” Holešínská said. “We really played well as a team. That was the most important thing.”

Holešínská struggled in Illinois’ following game against Holy Cross, shooting 0-10 from the field, but she still grabbed five rebounds, dished out two assists and played a respectable enough threat to keep the Crusader defense honest while Ali Andrews and the trio of freshman Jada Peebles, Kennedi Myles and Jeanae Terry provided the scoring punch that guided Illinois to its second win.

“It’s definitely important when you can have people that step up like that. It’s really great for the program, and I’m happy for them. They’ve all played really good games, so I’m just happy to have them here,” Holešínská said. “We talk about it in the locker room getting our first games, but this year, it just felt different. It’s been more fun, everyone’s excited for each other and our energy on the court is different. This is a really special group, and I think we can win a lot of ball games this year.”