Illini look for success in midst of injury 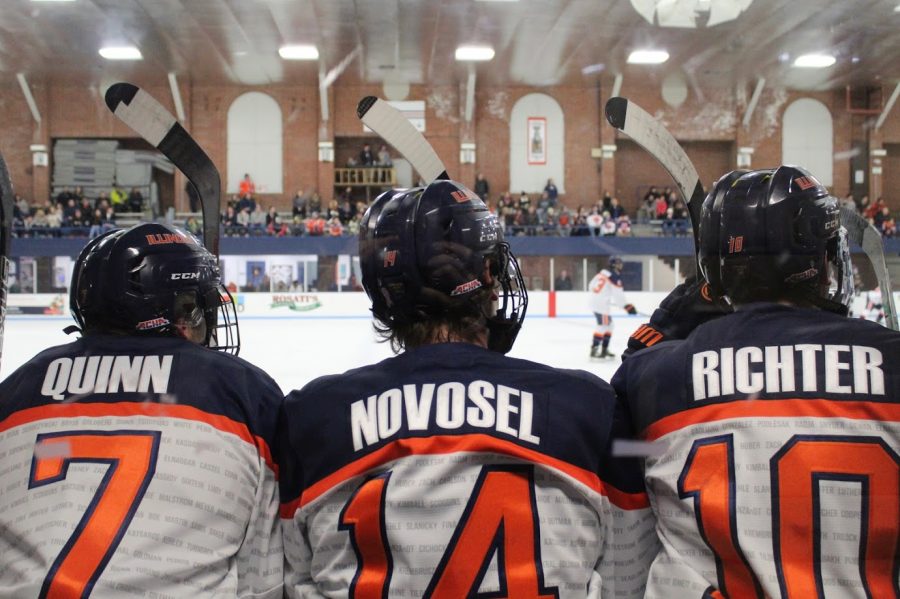 Illinois forwards Stephen Quinn (7), Neil Novosel (14) and Drew Richter (10) watch their teammates during the Illinois vs. Lindenwood game at the University of Illinois Ice Arena on Jan. 18. Illinois lost 2-1.

The Illini started the season by splitting or winning each of their first three-weekend series. Playing the same team on back-to-back nights makes for more competitive hockey.

“One thing that’s unique about hockey is you play each team two times when you go to play them, so you have an opportunity for revenge right away if you lose and vice versa,” said senior Neil Novosel.

Illinois had success early on in the season, including the Michigan State series. The Illini won the first game easily, 10-1, but lost to 2-1 the next day in a shootout where goalies saved the first 15 shots. Novosel said some of the team’s struggles come with scheduling.

The team looked as if it was starting to get in the swing of things, but then problems struck as injuries occurred. Nov. 1-2, the team had a sweep over a weaker Maryville team, with the Illini outscoring their foes 12-4 and winning both games across two days. However, at the end of the games, the Illini were down several team captains and lost a top-scorer in Jon Moskaluk.

Moskaluk underwent surgery for his ankle injury on Tuesday.

“It’s called tightrope surgery for ankle syndesmosis disruption,” Moskaluk said. “I should be back in January. This surgery allows for a quick recovery.”

Junior defenseman Joe Nolan is also coming back from an upper-body injury and has been skating again with limited contact. His return will help the Illini defense get back to its prior efficiency.

The mass of injuries has allowed freshmen players to get meaningful playing time. Although it may not be the way the team was hoping to get these guys more ice time, their presence is beneficial if more injuries happen down the line.

“Injuries are letting some of our young defensemen get in the game and get acclimated to our league and the style of play, which takes some adjusting to do,” Novosel said.

The Illini are aiming at staying ranked. After the team gets back to full health, the Illini are looking to make a run similar to last season. Once the line-up is at full strength, the team not only wants to play to the best of its ability but also to improve consistency.

“You can put a good 20 or 40 minutes here or there, but you really need to put in a good 60 to consistently win games,” Novosel said.