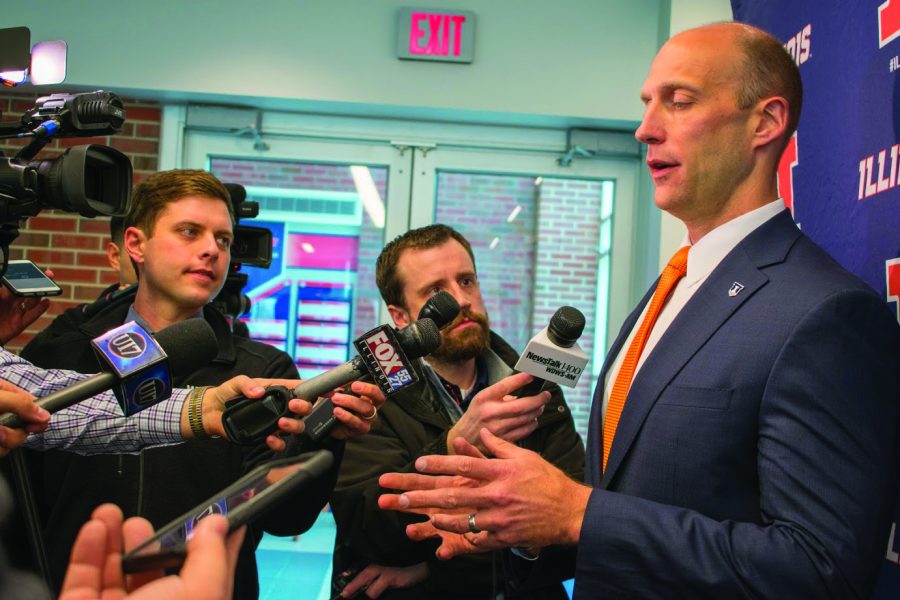 Josh Whitman, UI Director of Athletics, meeting with the press in the Hall of Fame Room at the Bielfeldt Athletics Administration Building on Mar. 8, 2018.

On Sept. 30, California governor Gavin Newsom approved state legislation which prohibits the state’s universities from preventing student-athletes from hiring agents or accepting advertising deals. This landmark legislation arguably marks a pivotal turning point in the “amateurism” of college sports — and challenges the age old question of whether college athletes should be paid.

Amateurism has been the name of the game in the NCAA for a long time. The standard is embedded in the organization’s own bylaws, which spend over 30 pages establishing what does — or does not — qualify an individual as an amateur, therefore making them eligible to compete in the NCAA.

The general principle of maintaining amateurism in college sports is this: The student-athlete exists as a core member of the student body and, therefore, must remain an amateur.

But as NCAA basketball season lurches into its earliest months, the elephant in the room is without a doubt green. Currently, the NCAA has a $19.6 billion deal with CBS and TNT to stream the Division I men’s basketball championship. This deal spans from 2010-2032, making college basketball one of — if not the most — lucrative businesses for the NCAA.

And when considering how many millions of people tune in every March to watch standouts like Zion Williamson or Ja Morant, it’s hard not to wonder how much of that money could (or should) go into their pockets.

As 14 states (including Illinois) have begun to consider adopting legislation similar to the one passed in California, even the once-staunch NCAA has readjusted itself — most recently deciding to allow student-athletes to profit off of their name, image and likeness.

This surprising change was announced Oct. 29, but it remains unclear thus far just what the change will look like when enacted. The NCAA’s three divisions are expected to create their own rules no later than January 2021, outpacing the enactment of California’s “Fair Pay to Play Act” by two years.

To put this into an Illinois perspective: When men’s basketball head coach Brad Underwood arrived in Champaign-Urbana in 2017, a six-year, $18 million contract was on the table. At $3 million a year, Underwood admittedly makes half of what the big names in Division I men’s basketball make — in comparison, legendary Duke head coach Mike Krzyzewski makes a little over $7 million a year.

But Underwood’s $3 million makes him one of the top-25 highest paid men’s basketball coaches in the nation — and one of seven in the Big Ten conference to land in the top-25 according to USA Today.

This certainly isn’t meant to disparage Underwood or any high-paid coach for that matter. Watching coaches at a high level do what they do best is just as entertaining to basketball spectators as an off-hand, between-the-legs, rim-rattling slam dunk — sometimes. But millions of people tune in to watch March Madness for those breathtaking, get-on-your-feet moments of outstanding athleticism — not to watch Michigan State head coach Tom Izzo turn red in the face.

Although it’s unclear what the future will look like for college athletes as far as NCAA-sanctioned compensation, it is clear change is coming, and change just might look like an Ayo Dosunmu sneaker deal.