Illini fall to Redbirds in first loss of season 74-58 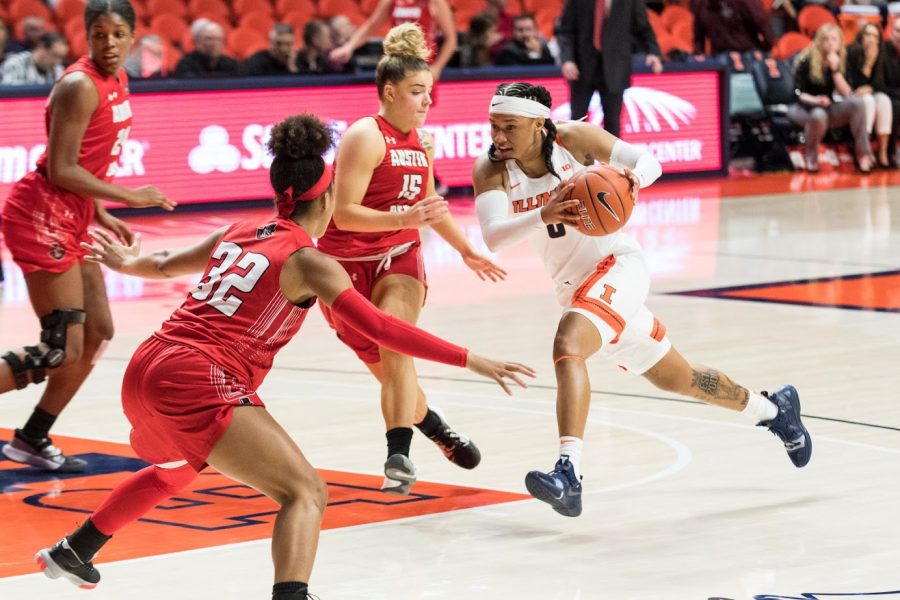 Sophomore guard J-Naya Ephraim drives in for a layup during Illinois’ game against Austin Peay at the State Farm Center. Illinois beat Austin Peay 76-62 on Wednesday.

The Illinois women’s basketball team suffered its first loss of the season and fell to 3-1 after hosting Illinois State on Saturday. The team was outscored by a total of 19 points in the second and third quarters, leading to a 74-58 loss.

Illinois State seniors guard TeTe Maggett and Champaign native forward Lexi Wallen combined for 47 points. Along with her 21 points, Maggett grabbed six rebounds and dished out eight assists, while Wallen grabbed nine rebounds to go along with her 26 points.

“Honestly they’re good players,” said Illinois freshman forward Kennedi Myles. “Good players score, good players play. We just didn’t execute and guard them as we should have. So, that was just a personal fault that we have to take back to the drawing board and fix.”

Illinois was outrebounded 40-17 in the game, which led to Illinois State outscoring its host in second chance points 8-2.

“When the shots went up, we weren’t creating any space in front of us,” said head coach Nancy Fahey. “I also think early, we took a lot of quick shots in the first two quarters … I just think their drive to the basket and their crashing was at another level, and we know it and we’ll have to respond to that.”

Throughout the first 18 minutes of the game, the score went back and forth, with the game seeing seven ties and 12 lead changes in the first two quarters. The last time the game was tied was 22-22 with 2:19 left in the first half.

The game was close, despite the Illini shooting only 7-25 in the first half, while allowing Illinois State to shoot 12-28 in the same amount of time.

After the game, Fahey talked about how she didn’t like the shots that the team was taking in the first half.

“We chart how many contested shots (the team shoots),” Fahey said. “In the first two quarters, we shot 17 contested shots that were early. That’s tough. So, what we were trying to do was get more ball movement so that we could get, what you would call an uncontested shot, and to try to pick up tempo.”

The closest Illinois came to a comeback was in the beginning of the fourth quarter, when it cut the lead down to 10, behind a combined 12 points from guard Petra Holešínská and Myles. The Illini were unable to sustain the run though, and the Redbirds ended on top, 74-58.

Illinois will be back in action against the University of Arkansas at Pine Bluff on Thursday night at the State Farm Center. Pine Bluff is 0-1 on the season, but has one game before they head to Champaign. Holešínská discussed what the team has to take from its first loss.